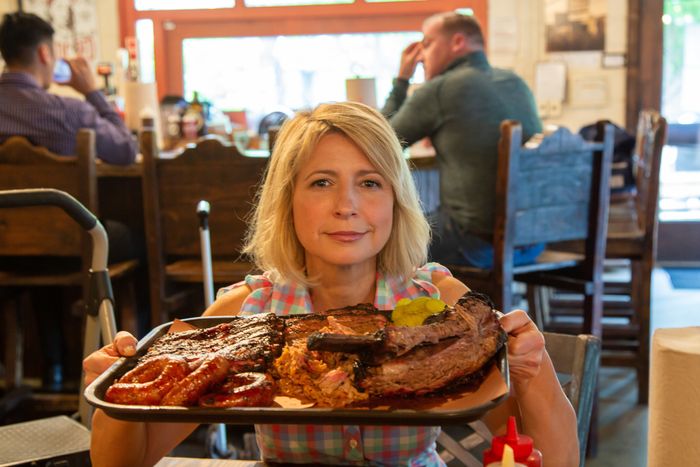 The host of 'Samantha Brown's Places to Love' on PBS also shares packing tips --- 'shoes are your nemesis' --- and talks about where every American should visit Read More...

When Samantha Brown heads to the office, she can be anywhere from a beach on the New Jersey shore to the grand palaces of South Korea.

That’s because Brown’s “workplace” is wherever she happens to be producing the latest episode of her PBS series, “Samantha Brown’s Places to Love.” In effect, she vacations for a living. And that’s been her career ever since she started hosting travel shows two decades ago — initially, for the Travel Channel, where she helmed such series as “Passport to Europe” and “Girl Meets Hawaii.”

A Dallas native who grew up in New Hampshire, Brown, 52 years old, didn’t plan on such an unlikely path. She started out wanting to make it as an actress — musical theater was a particular passion — but took other opportunities as they came her way. Traveling the world became the ultimate opportunity.

Today, Brown, who is based in New York City, can be on the road several months a year. But she put down her suitcase to chat with MarketWatch recently about her life and work and to share some advice about how to avoid travel pitfalls, especially in this summer of persistent flight cancellations and other vacation nightmares. Here are excerpts from the conversation.

MarketWatch: How did you get the travel bug?

Brown: Surprisingly, it was about four years into my job with the Travel Channel. I got the job as a host not being a travel journalist in any sort of way, just being a newbie who really loved the experience. But it is a job working in front of a camera, so I was daunted by that. The travel bug really hit me when I was doing a series in Latin America. I had spent so much time in Europe, where I felt [it] was all about being in the past, with the castles and the museums and the monuments. And then, when you go to Latin America, they don’t have all that pomp and circumstance that Europe has. So you spend more time just being in the moment, and that is when I just realized I love travel. I don’t care about museums. I care about being with people in their everyday lives, and Latin America gave me that that chance.

MarketWatch: What are some travel trips you can give, especially in terms of dealing with or even avoiding flight delays and cancellations?

Brown: The first thing you want to do is book the earliest flight you can, and that’s a 6 a.m. or 7 a.m. flight. It is hard getting up at 3, 4 a.m., but it is absolutely worth it. That’s the plane that [always] leaves. All these problems happen later in the day [with] more traffic, more delays.

The other thing I think is really important is you book directly with the airlines. I’ve never booked with a third-party site. You have a lot more credibility. You are higher in their list of valuable customers. And if something goes wrong, they are the people you call, and they will pick up the phone and they will be able to change your flight that has been canceled or delayed. If it’s a third-party site, that is not going to happen, and it’s really hard to find out who you do call.

Last piece of advice — and it’s always really worked for me — I use Twitter to get in touch with [the airline’s] customer service if my flight is canceled. That’s the very first thing that I do. You can direct [message] every single airline on their Twitter TWTR, -7.32% feed. Send them your confirmation code, saying, “My flight’s been canceled. Can I get on the next flight?” and they are able to book you. I do that as I’m getting in [the customer-service] line if I’m at the airport. While you’re in that line, you’re tweeting.

MarketWatch: More people than ever are probably going to be bringing carry-ons onto the plane instead of checking a suitcase these days, so what are some keys to packing light?

Brown: Well, first, I think it’s to remember that you’re not hosting the Oscars. You’re just going on vacation.

You want to maximize tops — you can bring 10 tops, and they won’t fill up a carry-on. Pants will. And when it comes to pants, you want to bring things that you can just wipe off with a sponge, right? Should mustard from your hot dog at the airport fall on your black pants, it’s pretty easy to spot treat. I’ll also bring clothing that I know just washes well in a sink, and I can dry overnight hung over the shower.

The way I change outfits, make them a little more fashionable, it’s just with accessories. It’s amazing what a scarf does for an outfit.

Shoes are your nemesis. Shoes take up way too much room. And no one really cares [what’s on your feet]. A lot of people will argue with me on that. But if you’re looking at my feet, I just don’t care.

MarketWatch: What has been your biggest travel nightmare?

Brown: Oh, my gosh. Being stuck at the airport, basically this summer. … A lot of it is just understanding that you’re not going to get home when you want, and to make the best of it.

MarketWatch: Best piece of financial advice you’ve ever been given?

Brown: Live below your means. I kind of learned through my parents. They never really taught me about finances, but I learned from them that just because you want something doesn’t mean you get it. I then moved to New York City, where I waited on tables for eight years, and made $18,000 to $20,000 a year, and that’s not a lot of money to live on. And so, when I finally did start to make money, I knew I never wanted to feel the way I did for the first eight years of being in New York City, and never having enough and always worrying about rent and what I was going to buy at the grocery store and that sort of thing. So I’ve always been eager to save, and I don’t see a lot of huge benefits in spending. I like to see that money safe.

MarketWatch: What’s something you’re willing to splurge on?

Brown: Handmade items. I never haggle with people. I never try to talk them down in price. I always appreciate the fact that they’ve done something with their hands, and that this is something unique. Sometimes I just want to give them more money.

Brown: I have this beautiful Limoges porcelain figurine that I actually got at the factory where they make Limoges in France. It’s this woman holding a basket of Valencia oranges. I’ll never forget [how I got] that because I was having a really hard day. Things were not going well back at home. I was thousands upon thousands of miles away. A woman saw that I was struggling, and she said, “Here, have this.” So, it was a gift. Whenever I look at that, I still think of the kindness that I was given.

MarketWatch: What’s a job you’d take even if you didn’t get paid?

Brown: I would love to help the elderly because I feel like they have such a wisdom to them that is never tapped, is never really appreciated. People who are older, and who have lived their lives, have so much great advice and wisdom to give. I would love to work with them just to help them. And then, of course, have them help me in return.

MarketWatch: When most people talk about retirement, they say they’re going to travel more. In your case, you’ve already traveled the world. So is your perfect idea of retirement just staying at home?

Brown: It is having a garden. That’s my idea of retirement. I would love to have a beautiful little garden that you have to tend to every day. [Or] take up hobbies that I could really commit to for longer than three days before I have to leave again. I would still travel, but there would be a sense of me just hunkering down and really enjoying being home.

MarketWatch: Finally, a place that every American should visit?

Brown: Anywhere overseas where the culture is different, and the language is different. So that’s not the U.K. It’s so eye-opening going to a place where absolutely nothing is familiar. Nothing. Not even what they have for breakfast. It absolutely opens your mind and just enriches what you know and what you don’t know. I love this amazing lightness of being human that happens because we’re not holding on to what we know. What’s familiar can actually be a burden. And when you’re in places that give you none of that, all you can do is just be in awe and enjoy.