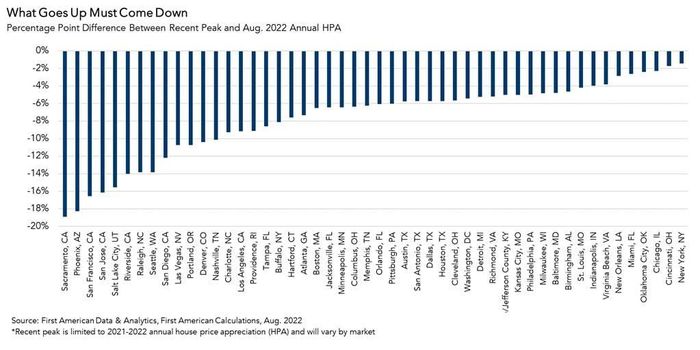 Housing markets across the country are seeing home price growth slow, led by Sacramento, Calif., according to a new report by First American. Read More...

The pandemic housing boom is officially over. Home price appreciation has stalled, with markets in the West leading the nation in declines, according to a new report.

“Pandemic Boom Markets Cooling the Fastest,” a report from First American, looked at affordability as part of its Real House Price Index, and found that the doubling of mortgage rates has seriously hit home buyers’ spending potential.

In August, real house prices (which are inflation-adjusted) jumped 49% compared to the previous year. But between July and August, real home prices fell 1.8%, according to the company.

Expect home price appreciation to “fall further,” Mark Fleming, chief economist at First American and author of the report said, “as the hot sellers’ market of early 2022 turns in favor of buyers.”

The 30-year fixed-rate was averaging at 7.32% as of Friday, according to Mortgage News Daily.

Fleming told MarketWatch in an interview that home price appreciation could go down to low single-digits, but stressed that home prices had shot up so much that they weren’t exactly crashing.

“Prices are coming down, appreciation is moderating in the housing market more broadly. We’re still selling 4.7 million homes a year, the typical amount of time is 19 days to sell a home — this doesn’t sound like a recession,” Fleming said.

“House price appreciation has slowed in all 50 markets we track, but the deceleration is generally more dramatic in areas that experienced the strongest peak appreciation rates,” Fleming noted in the report.

The market with the strongest deceleration was Sacramento, where home price appreciation peaked in July 2021 at 23.5% and slowed to 4.6% in August.

San Francisco saw the slowest annual pace of appreciation in August, at 1.1%, which was down significantly from a peak of 17.6% in July 2021.

“It’s no surprise when you look at the list, most of the markets that are decelerating the fastest are our western markets,” Fleming said.

Conversely, many markets in Florida, such as Miami, are still holding up pretty well.

“Buying real estate in the United States is viewed as a safe place to park your money, and you also get to spend some time in it,” he said.

Factoring in migration from other states like New York, that results in strong demand for the Florida market.

Housing markets in the Midwest are also interesting to look at, Fleming said, given how quietly, slowly, but steadily they’ve been appreciating.