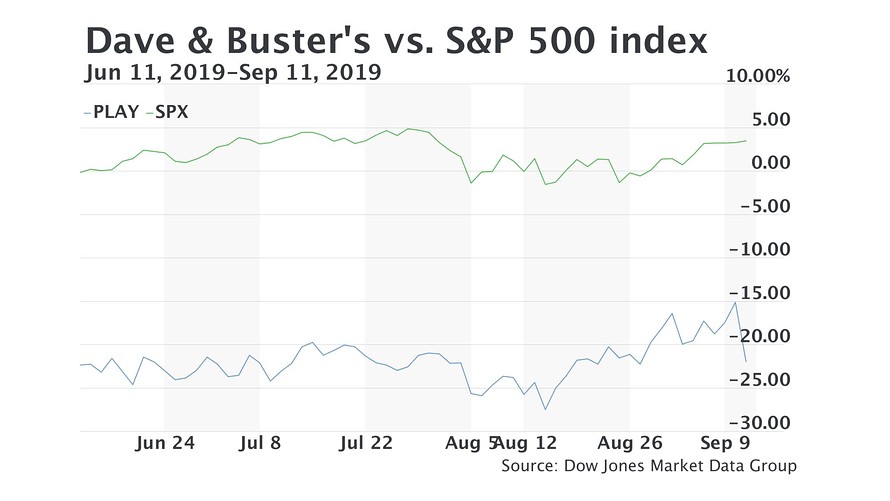 Dave & Buster’s is facing competition from others, and from its own locations, and same-store sales are suffering. Read More...

Dave & Buster’s Entertainment Inc. isn’t the only game in town, and the competition is eating away at same-store sales.

Dave & Buster’s PLAY, -4.62%   stock took a 9.7% nose dive in Wednesday trading after the company cut its guidance and reported a 1.8% same-store sales decline for the second quarter.

The stock closed Wednesday down 4.6%.

“While we continue to profitably grow our business and return significant capital to shareholders, our comp sales results came in below expectations as last year’s [virtual reality] launch proved difficult to match and our promotions were not as effective as we anticipated,” said Brian Jenkins, Dave & Buster’s chief executive, on the earnings call, according to a FactSet transcript.

He also said weather and “competitive intrusion and cannibalization” were to blame.

As more people look to spend their time and money on experiences, Jenkins said Dave & Buster’s is in a good position to capitalize on the trend. But there are now “many more players in the space and the overall market today is quite fragmented and competitive.”

One of the keys for turning around same-store sales, Jenkins said, will be a focus on food and beverage and driving engagement, including through a new mobile app.

Despite the company’s plans, Raymond James is bearish.

“The bottom line is that the company has not found a solution for its share losses due to competition intrusion and challenging industry trends (negative traffic, increased use of delivery),” wrote John Zolidis, president of Quo Vadis Capital. “This is leading to the ongoing erosion of Dave & Buster’s otherwise-attractive economic model. There is no end in sight to this pressure.”

Also: White Claw, Truly and other hard seltzers could take a hit from Sober September

Company executives explained a number of initiatives that they will be executing to grow the business, including a “Wow Wall,” a digital display that is customized for each location. In Dallas, the “Wow Wall” is a 50-foot LED screen. It will be expanding to 35 other locations in time for football season.

“Dave & Buster’s has a plan, which may support same-store sales, but competition is driving a very weak starting point,” wrote Jake Bartlett for SunTrust Robinson Humphrey. “We welcome potentially slowed new store development in late ’20 and ’21, which could limit sales cannibalization and boost margins.”

Bartlett said the company could focus on its smaller 17,000-square-foot stores in new markets. The smaller format has done well, and the new markets could reduce cannibalization and boost same-store sales.

“Also, with a greater focus on refurbishing stores and potentially improving its amusements content, Dave & Buster’s has a better chance of defending its current store base from competitors,” wrote Bartlett.

SunTrust rates Dave & Buster’s stock hold with a $41 price target, down from $45 previously.

Why  Ordinary Singaporeans  Are Spending Faster Than the Rich

When companies can spend $120 to get your order delivered overnight: How speedy shipping is changing retail

Delivering the goods: Drones and robots are making their way to your door