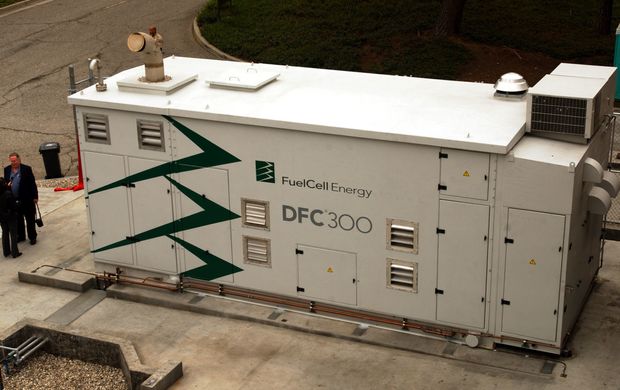 Shares of FuelCell Energy Inc. kept soaring Thursday, even after J.P. Morgan analyst Paul Coster backed away from his bullish call on the fuel cell technology and power generation company, following the "dramatic" run up this week on no news. Read More...

Shares of FuelCell Energy Inc. kept soaring Thursday, even after J.P. Morgan analyst Paul Coster backed away from his bullish call on the fuel cell technology and power generation company, following the “dramatic” run up this week on no news.

The stock FCEL, +12.94% climbed 11.1% in active morning trading, and has now rocketed 121.1% amid a five-day win streak. Trading volume topped 48.8 shares within the first 30 minutes after the open, already more than the full-day average of about 33.6 million shares.

The shares have soared 144.2% over the past month, which Coster pegs initially on a wave of regional “climate ambition” initiatives associated with hydrogen and fuel cells, then on a re-rating of alternative energy stocks on the back of Joe Biden’s victory in the presidential election.

But the “more dramatic” move over the past several days seemed to take place in the absence of any new news, he said.

Coster cut his rating on FuelCell to neutral, after initiative it at overweight six weeks ago. He raised his stock fair value estimate to “around $4,” which is 29.3% below current levels, from about $3.

“Fundamentals do seem good for [FuelCell], and the company seems to be on a track for profitability in 2022, but the stock has traded through our prior estimate for fair value,” Coster wrote in a note to clients.

He said his new neutral rating “is not a call to sell the stock,” which he said embeds “significant optionality” associated with carbon capture and the hydrogen economy, he just prefers other names in his coverage universe at this time.

Specifically, in the fuel cell/hydrogen space, Coster said he prefers Bloom Energy Corp. BE, +7.72%, which he has rated overweight since August 2018.

Internet retailers like Amazon are cutting delivery times. What about Wayfair?

After YouTube’s $170 million fine for allegedly collecting children’s data, read this before allowing your kids to go online