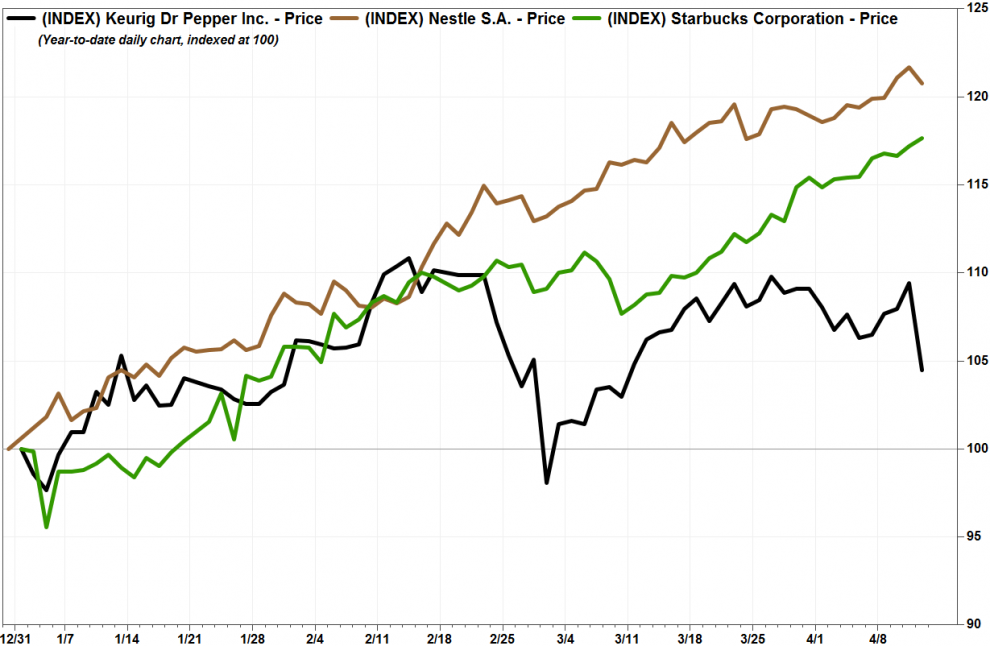 Shares of Keurig Dr Pepper Inc. are knocked lower after Morgan Stanley turns bearish, citing evidence that the growth in single-serve coffee’s share of the “at home” coffee market is slowing. Read More...

Analyst Pamela Kaufman cut her rating to underweight, after being at equal weight as of December 2018. Her $24 stock price target is 10% below current levels.

“Our proprietary AlphaWise survey of nearly 2,000 U.S. consumers, coupled with our detailed review of the U.S. coffee market, informs our forecast of a slowdown in single-serve coffee penetration, with [Keurig] most at risk,” Kaufman wrote in a note to clients. It could also be a positive for some of Keurig’s rivals, she said.

The stock KDP, -4.24%  fell as much as 5.2% in intraday trading before paring losses to closed down 4.2%. Volume rose to 6.5 million shares, more than double the full-day average of about 2.7 million shares.

Kaufman said the survey showed that only 4% of nonowners are “very likely” to purchase a single-serve coffee brewer, while about 70% of nonowners are “not likely” to buy one because they were either not interested, prefer drip coffee or are not coffee drinkers. And that’s with awareness already high, particularly for Keurig brewers at 83%.

Kaufman said she also believes pricing pressure on single-serve coffee pods will continue, as the survey supported her forecast for a mix shift to lower priced private-label pods. She said her research points to an optimal price of 42 cents a pod, while the current price is 49 cents.

“This creates margin risk given single-serve coffee market profits are entirely based on the pods—with brewers’ margins close to break-even,” Kaufman wrote.

Meanwhile, she said the survey results could be positive for Swiss-based Nestle S.A. NESN, -1.19% and to a lesser extend for Starbucks Corp. SBUX, +0.52%

Kaufman said her analysis of the survey’s data suggests a “potential acceleration” of Nestle’s Nespresso system in the U.S., particularly with the addition of Starbucks-branded pods.

The single-serve market is a small part of Starbucks’ overall business, but expanding into the Nespresso systems coupled with growing U.S. interest in that system “is an incremental positive.”