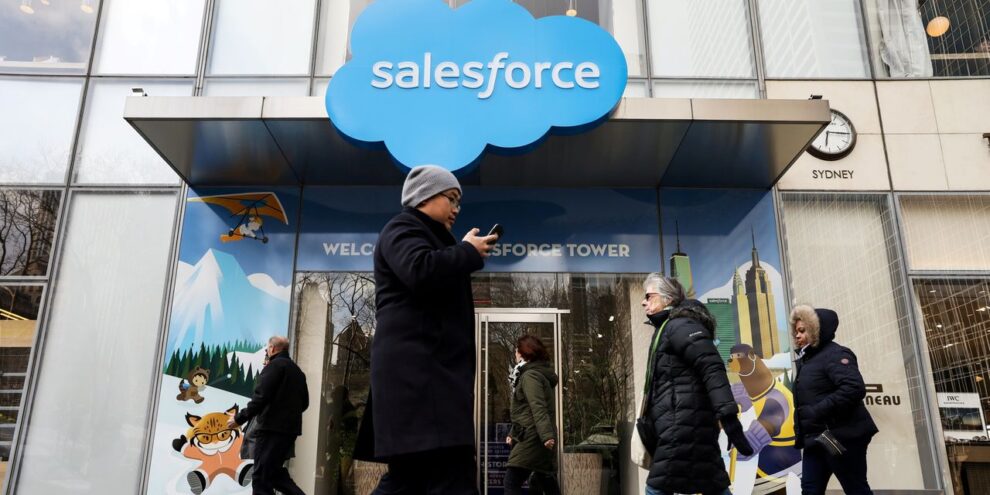 Salesforce Inc. shares were on track for their best day since the summer of 2020 Wednesday after earnings were "better than feared." Read More... 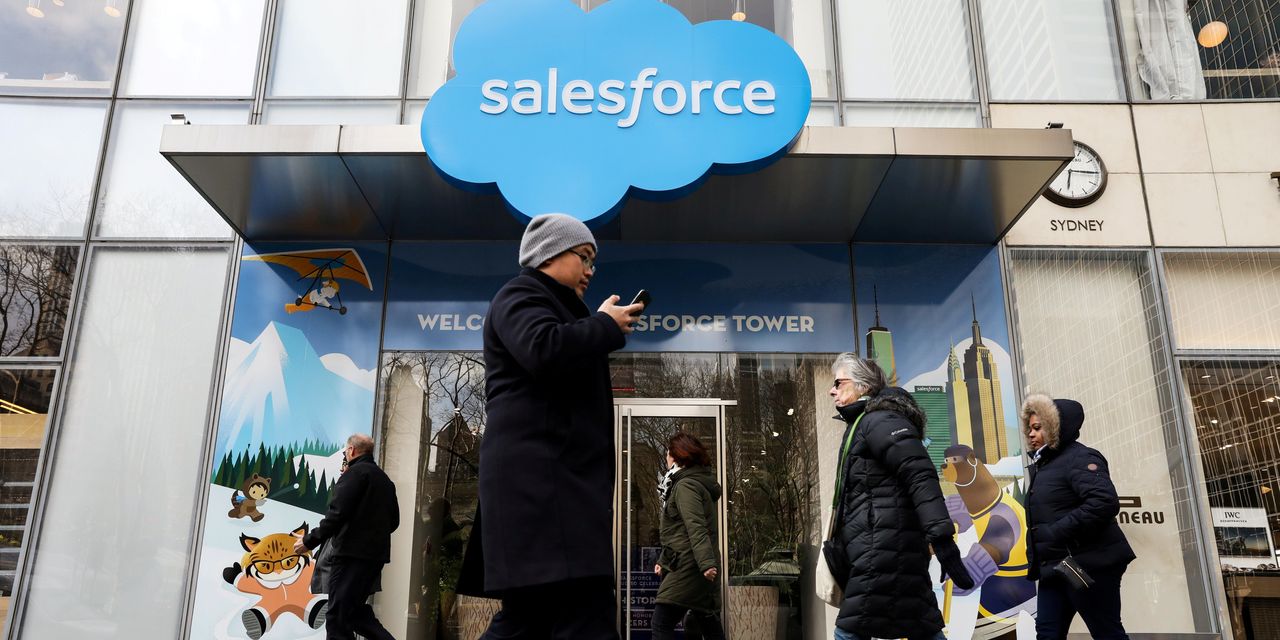 An earlier version of this article misstated the standing of Wednesday’s stock gain compared with other historical gains. It has been updated.

Salesforce Inc. shares were on track for their best day in nearly two years Wednesday, after Wall Street analysts described the software company’s earnings as “better than feared,” and cheered an outlook that balanced prudence and optimism.

Salesforce CRM, +11.01% shares surged as much as 15% Tuesday to hit an intraday high of $184.42. Though gains slipped to about 11% later in the session, that would still be good enough for their best one-day gain since Aug. 26, 2020, when shares rocketed a record 26% following quarterly results that were turbocharged from businesses rushing to shore up their digital footprints as the COVID-19 pandemic swept the world. The stock was the best performer on both the S&P 500 index SPX, -0.22% and the Dow Jones Industrial Average DJIA, -0.20% Wednesday.

Salesforce modestly topped Wall Street estimates for the quarter late Tuesday, and executives increased their earnings forecast for the year while trimming the revenue outlook because of a higher dollar, allaying fears that macro headwinds would hurt business going forward. Before the report, analysts had expressed concern that an economic uncertainty would slam the brakes on business spending and weigh upon the enterprise software sector.

Like a chorus expressing a collective sigh of relief, at least four Wall Street analysts specifically termed Salesforce’s Tuesday report as “better than feared”: Wedbush analyst Daniel Ives, Citi Research analyst Tyler Radke, Mizuho analyst Gregg Moskowitz, and Jefferies analyst Brent Thill, who even titled his note “Better Than Feared.” All have buy-grade ratings on the stock except Radke, who has a neutral rating.

Wedbush’s Ives, who has a $225 price target on the stock, said Salesforce’s report is “a major relief for tech investors, showing that core enterprise demand is holding up well despite the macro and geopolitical swirls.”

“As a major bellwether for tech and off-quarter earnings, the Street was laser-focused on Salesforce numbers and comments from Benioff to see any major hints of enterprise spend weakness,” Ives said.

Citi’s Radke, who has a $182 price target, said that upon reflection, “we see Salesforce’s results as a slight positive with demand trends holding up well.”

The rise in Salesforce’s margin forecast, however, reflected “a more conservative spending posture, which is positive but could also be a sign of less confidence in growth,” he said.

“We note that the implied step up in operating margins from 17.6% in Q1 to >20% by Q4 implies much slower operating expense growth in the 2H (low-teens), which would be anemic by Salesforce historical standards and could explain recent press reports around hiring freezes and a noticeable decline in job postings,” Radke said.

Even though Salesforce executives expressed an optimistic outlook, their posture was prudent. The company raised its operating margin outlook by 40 basis points, indicating more conservative spending internally, and dispelled rumors of a hiring freeze, noting that hiring was now “at a much more measured pace.”

Jefferies’ Thill, who has a $260 price target, said the macro environment remains tough and that “cyber and infra names tend to be more resilient than apps in a macro downturn,” and that he “will keep an eye on apps spend and pipelines in the upcoming quarters.”

While the company is sitting on about $13.5 billion in cash and securities, executives shot down questions from analysts on the prospect of buying back shares that are nearly 50% below their Nov. 8 record close of $309.96. Since its June 2004 IPO, Salesforce, which currently has about 990 million shares outstanding, has bought back a total of 66,000 shares, according to FactSet data.

“Right now, our overall focus is on strengthening our balance sheet to really capitalize on all of the opportunities in front of us,” Amy Weaver, Salesforce’s chief financial officer, told analysts on the call.

Nor does Salesforce have any plans for M&A as it approaches its first anniversary of acquiring Slack Technologies.

“For right now, we’re not really looking at doing any major acquisitions: It’s just not part of our playbook right now,” Marc Benioff, Salesforce chairman and co-chief executive, told analysts in Tuesday evening’s call. “We’re really focused  on integrating the ones that we have. We have a lot of work to do still, and that’s our primary focus.”

Cowen analyst Derrick Wood, who has an outperform rating and a $225 price target, eschewed the “better than feared” phrasing, and considered the report mostly in-line with “some puts and takes.”

Wood said that the margin outlook raise “in addition to no M&A in current playbooks, shows an increasing commitment to margins, which we view positively for the stock.”

J.P. Morgan analyst Mark Murphy, who has an overweight rating and a $275 price target, called Salesforce “a model of resiliency, projecting stability into a more volatile macro.”

“In our view, investors have been bracing for an impending slowdown/recession and were probably expecting some caution on macro, signs of European deal slippage, or pipeline softening,” Murphy said. “We believe Salesforce’s net-positive macro commentary could catalyze investors to reconsider beaten-down growth-oriented software stocks, perhaps boosting confidence into a near-term rally.”

Of the 49 analysts who cover Salesforce, 44 have buy-grade ratings and five have hold ratings, Of those 26 lowered their price targets Wednesday, while three raised theirs, resulting in an average target price of $245.71, down from a previous $264.46, according to FactSet data.