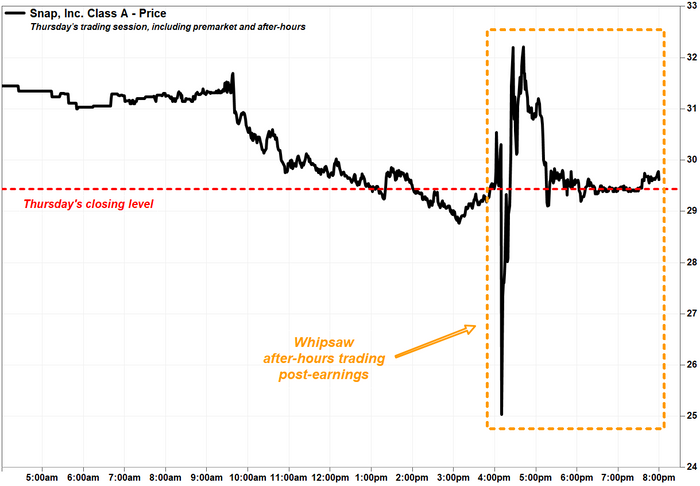 Snap Inc. added to jitters about the resilience of the broader social-media industry with its latest earnings report, though its shares were heading higher in Friday morning trading. Read More...

Snap Inc. added to jitters about the resilience of the broader social-media industry with its latest earnings report, though its shares were heading higher in Friday morning trading.

Snap shares SNAP, +3.20% are known for taking double-digit swings after earnings, but they were on pace for a comparatively muted finish Friday in the wake of a mixed report. The stock was up 4.2% in morning trading after the company reported a slimmer adjusted loss than had been expected but fell slightly shy of user-growth expectations.

“In the latter portion of Q1, advertisers in a wider variety of industry groups reported concerns related to the macro operating environment, including continued supply chain disruptions, rising input costs, economic concerns due to rising interest rates, and concerns related to geopolitical risks stemming from the war in Ukraine,” Chief Financial Officer Derek Anderson said on the earnings call.

“While there’s no material changes to the long-term story — in fact, progress looks promising — the-near term uncertainty was front and center,” he wrote in a note to clients. “We were hopeful Snap was small enough to fly under the macro-headwinds radar but alas when it’s rainy everyone gets wet.”

He rates the stock at outperform and lowered his price target to $55 from $65.

MoffettNathanson analyst Michael Nathanson also noted Snap’s relatively small size but asked if Snap was “the canary in the coal mine for the digital advertising sector.”

“Despite being a fraction of the size of Alphabet and Facebook, we believe Snap’s 1Q 2022 results give a preview into the potential macroeconomic impact on advertising spending from rising inflation, supply chain shortages and the war in Ukraine,” he wrote in a note to clients.

He maintained a buy rating on the stock but cutting his price target to $44 from $51.

Looking at others in the ad industry, Nathanson noted that Meta Platforms and Google-parent Alphabet could hold up better than brand-oriented services, and they “should be the last to cut from marketing plans,” unlike a platform like Snap, which might still be seen as more “experimental” for advertisers.

“Nevertheless, it appears there may be a single-digit hit to digital ad revenues as per Snap’s results,” he wrote of Facebook and Alphabet.

Morgan Stanley’s Brian Nowak called Snap’s performance “somewhat of a yellow flag” for bigger players like Facebook and Alphabet, highlighting that Snap posted a weaker-than-expected report and outlook despite deriving just 15% of its revenue from Europe.

“[I]f Snap is seeing weaker results due to a challenging macro environment, it is hard to imagine that larger platforms won’t see an impact too,” Nowak wrote. “Some of this nervousness may be priced… but it will be important to monitor revisions next week as we may have more cautious commentary ahead.”

He has an overweight rating on the stock but cut his price target to $55 from $59.