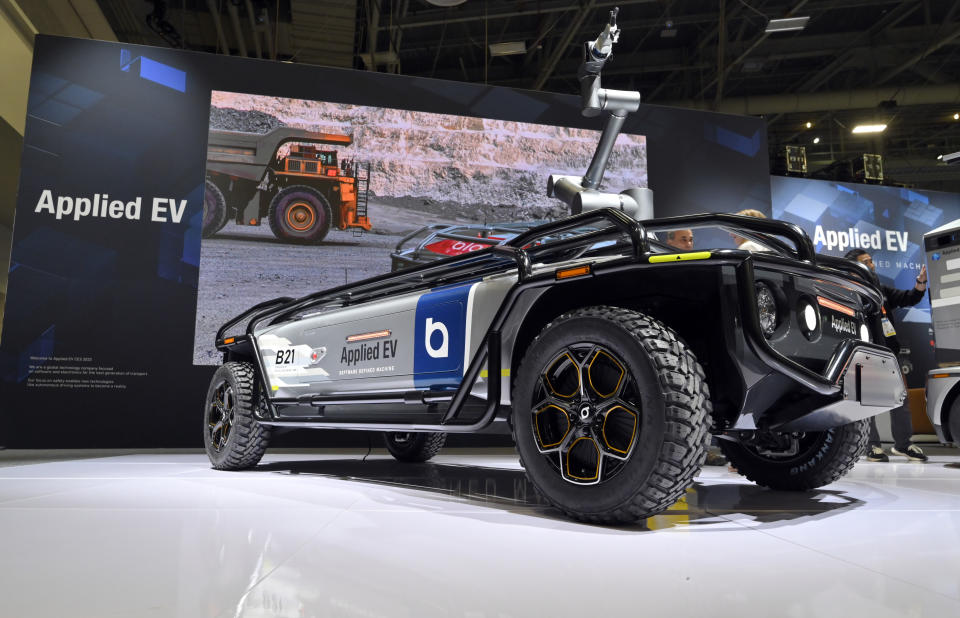 Here at CES: For me, autonomous vehicles inspire profound fascination and equally deep fear. I'm fascinated by their future and inevitability. Read More...

For me, autonomous vehicles inspire profound fascination and deep fear. I’m fascinated by their prospects for the future—their inevitability. I also constantly wonder: how can we make this mode of travel safe? How’s it possible a self-driving car could ever be safe?

Broadbent is optimistic about how grocery vehicles like this could allow consumers to get comfortable with autonomous vehicles, far before they’d ride in one or even explore having an autonomous vehicle of their own.

However, it’s in highly-regulated industrial settings that autonomous vehicles are possibly thriving the most. Applied EV’s in on this, having produced the tech for an autonomous mining truck (pictured below).

So, it’s no accident that Caterpillar’s (CAT) autonomous mining truck also attracted lots of attention at CES. For one, it’s actively being used right now. At the company’s booth, you could watch real-time videos of the company’s AV trucks at work in Arizona and Illinois, and even step in to pilot vehicle.

The other attention-grabbing detail? These vehicles are huge. Take Caterpillar’s autonomous 777 Mining Truck (pictured below), which was featured at CES and weighs in at 100 tons. (So, I’m pretty short, to be fair, but I barely made it halfway up the wheel.) Caterpillar employees on-site assured me that this was one of the “small ones.” Some of Caterpillar’s autonomous mining trucks can weigh in at 400 tons.

When it comes to safety, data is key

If you’re afraid of autonomous vehicles, particularly if you’re afraid of being in one, you can rest easy for the time being. Mass market autonomy is still very far off, as these cars just don’t yet have enough data about the changing environments around them to safely navigate. Consider all the information you’re taking in when you’re driving a car—the closed highway exit, calculating the velocity of other cars you’re trying to pass. At CES, experts said that data is crucial before the AV boom comes to your neighborhood.

Meanwhile, a number of companies are trying to solve that problem by investing in their Advanced Driver-Assistance Systems, or ADAS. For example, former Intel unit (INTC) Mobileye’s (MBLY) tech is currently embedded in 120 million vehicles that are on the road now; the company’s customers include BMW, Nissan, and Volkswagen. Mobileye’s tech focuses on driver assist functions, like emergency automatic parking, and use computer vision to build out a data that will, eventually, lend its vehicles to full-fledged autonomy.

Similarly, Aeva (AEVA) focuses on developing its LiDAR 4D cameras that can determine the direction and velocity of objects in a car’s surrounding environment. This seeks to solve a problem that’s been especially noted in Teslas (TSLA), which are prone to “phantom braking” because they have regular cameras, which lack a good sense of depth. Some of tech space’s biggest names are involved in building out ADAS capabilities, including Qualcomm (QCOM), Nvidia (NVDA), and Alphabet-owned (GOOG, GOOGL) Waymo.

So, there you have it. Though we still need far more data to build the systems that will allow for safe driverless vehicles, many companies, some here at CES, are already tacking the problem.