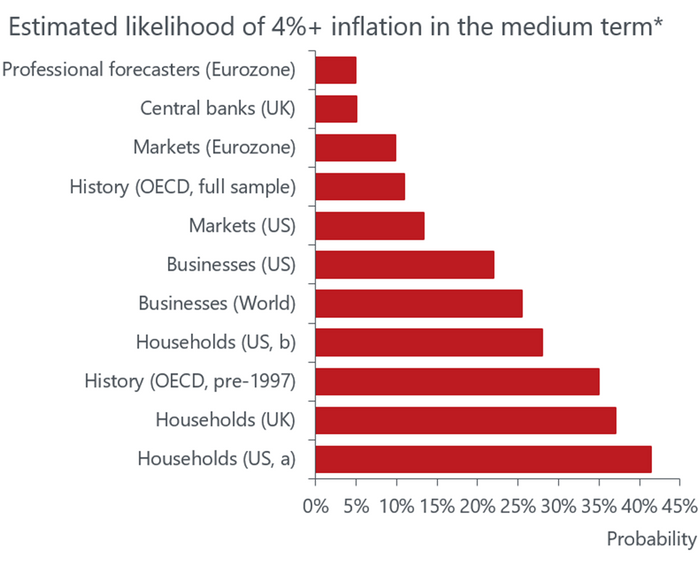 Amid the continuing debate about where inflation is likely to go from here, Jamie Thompson, head of macro scenarios at Oxford Economics, is stepping in with a list of reasons why it could stick around for a long time in the U.S. and abroad.

One big reason is that the “longer inflation stays high, the more embedded it is likely to become,” Thompson wrote in a note released on Tuesday. “While our view is that inflation is likely to recede next year, the outlook is highly uncertain, with evidence underscoring the risk of a more gradual slowing.”

Inflation is likely to remain the No. 1 determinant of whether 2022’s wild volatility in stocks and bonds persists into next year. Central bankers and many forecasters remain optimistic and are clinging to the hope that inflation eventually eases, with the consensus view being that it should drop toward 3% or lower in two years. History, on the other hand, shows that it has taken years for inflation to drop below 6% after it spikes above 8%, as it already has in the U.S., the U.K. and the eurozone. Meanwhile, U.S. households are bracing for a greater chance that inflation stays above 4% over the medium term.

Read: Why hopes for a Fed ‘pivot’ could be off-base, once again, according to the long history of inflation

“Central banks have been at pains to emphasize that they won’t settle for a sustained period of high inflation. This is borne out by their actions, given central banks’ willingness to pick up the pace of policy tightening even with recession looming over their economies,” Thompson wrote in an email to MarketWatch on Wednesday.

“But central banks could easily be repeatedly surprised by the strength of inflation, should policy rate increases prove less impactful and inflation expectations more sticky than they expect,” Thompson said. “This highlights the risk of significant volatility ahead as central banks feel the need to adjust again and again the stance of policy.”

In a nutshell, here are the seven reasons behind Thompson’s thinking:

On Thursday, all three major U.S. stock indexes opened higher after data releases showed that the U.S. economy grew 2.6% in the third quarter and durable-goods orders rose in September. Treasury yields fell across the board during the New York morning, with the 10-year rate TMUBMUSD10Y, 3.936% dropping to 3.98%.