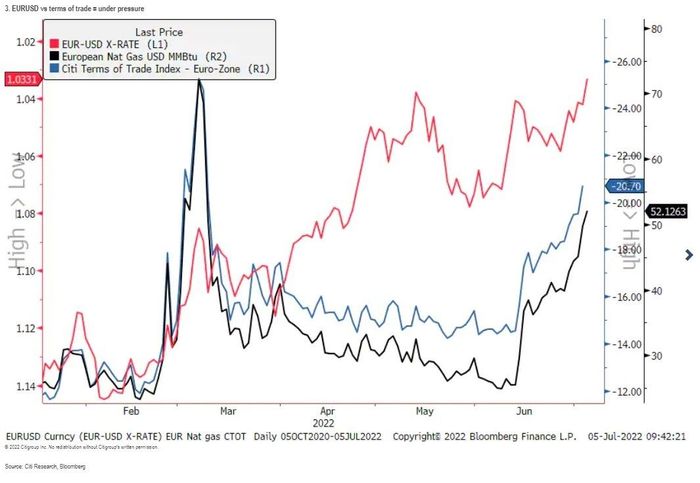 The euro is set to keep sliding until it reaches parity against the dollar, according to strategists at Citi, unless the surge in natural gas prices bought about by Russia's invasion of Ukraine ends. Read More...

The euro is set to keep sliding until it reaches parity against the U.S. dollar, according to strategists at Citi, unless the surge in natural gas prices brought about by Russia’s invasion of Ukraine ends.

Strategists at Citi say that throughout most of 2021 the euro traded closely to differentials at the front end of the interest rate curves, but that relationship has now completely broken down. Another relationship that has evaporated is the link to bond yield spreads in periphery countries of the eurozone; the recent tightening in spreads between Italian and German bonds hasn’t supported the shared currency.

Instead, the euro is reflecting the fragility of natural gas supplies. Mostly, that’s about Russia cutting off supplies to Europe, due to the war in Ukraine, but there’s also the issue of the recent explosion at the Freeport LNG facility in the U.S. as well as strikes impacting output from Norway.

The strategists say there’s questions about whether Europe has the capacity to import the amount of LNG that would be needed to offset Russian gas flows, if they don’t return to normal levels after the scheduled maintenance period ends on July 21.

“If flows return to near normal, then we could expect to see less dependence on LNG imports, and we should see some of the tightness coming out of the market as European storage facilities reach their 80% target,” say strategists at Citi.

Dutch TTF gas futures rose 3% on Tuesday and have more than doubled in value this year.