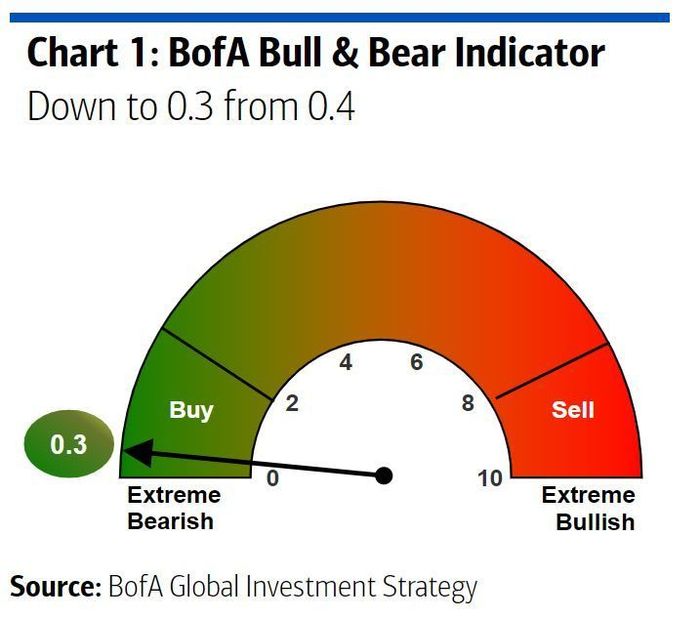 Bank of America says plenty of shocks await this market, and that's one reason why the bear market rally has struggled. Read More...

The shocks aren’t over. Get ready. That’s the timely Friday advice of Bank of America, delivered hours before worse-than-expected U.S. inflation data knocked the wind out of Wall Street and left investors bracing for more aggressive central-bank action.

Don’t miss: Consumer sentiment plunges to record low in June, according to University of Michigan survey

Taking a fresh look at the so-called bear-market rally in U.S. stocks that took hold in late May was a team at Bank of America, led by Michael Hartnett, the chief investment strategist. The bank’s own bull and bear indicator is now deep in “contrarian bullish” territory — with credit also looking “deeply oversold,” noted Hartnett.

So why do investors keep selling those rips? The inflation shock isn’t over, as driven home by Friday’s data, an interest-rate shock is just taking shape, an economic-growth shock is looming, and there is “no release valve from a peak in yields,” while the bear-market rally itself is “too consensus,” in Hartnett’s view.

“We’re in technical recession, but just don’t realize it,” said Hartnett, who notes ever murkier consumer data and household and consumer balance sheets indicating a shallow recession ahead. He added that “what can turn shallow into deep is the great unknown of the shadow banking system.”

And of course, stagflation is also a risk, one that’s incompatible with the “goldilocks” S&P 500 price/earnings ratio of 20 over the past 20 years, he said, observing it should be nearer to 15 times.

And panicky investors may be getting more whiffs of reality, with the bank noting that $54.2 billion flowed to cash according to latest weekly data, the biggest in six weeks. Just $12 billion went to equities.