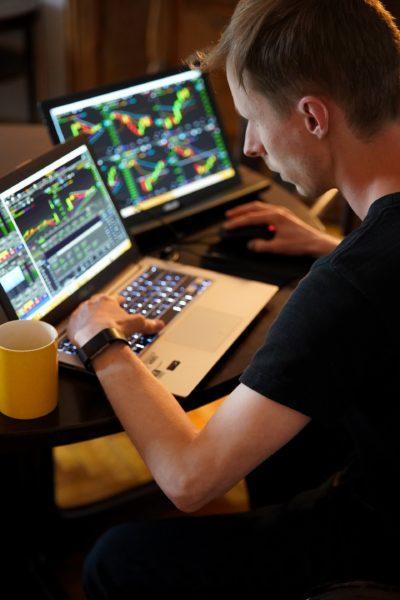 Companies have faced massive pressure lately, due to the Russia-Ukraine war, inflation at a 40-year high, recession looming on the horizon, and overall slower economic growth. Consumers are shifting towards basic necessities, preferring private labels over brands, which has led large-scale retailers to revise their profit estimates as well.

The labor market has also taken a significant hit, as not only tech but startups and companies across all sectors are letting go of their staff, citing uncertainty, cost cutting, and a move towards financial sustainability. Big players like Netflix and Tesla are downsizing notably, in addition to many other small and mid-sized industry participants.

Similarly, the global supply chain crisis has also impacted companies severely, which led to lower margins since the entire cost cannot be transferred to customers at once. Some of the most notable market players that recently announced lower profit forecasts include Walmart Inc. (NYSE:WMT), PayPal Holdings, Inc. (NASDAQ:PYPL), and Snap Inc. (NYSE:SNAP).

We have mentioned the companies that cut their profit forecasts over the past few weeks, citing latest corporate guidance for each firm. The number of hedge funds that held stakes in each company are also mentioned for further context for potential readers. The database of 900+ elite hedge funds tracked by Insider Monkey as of the first quarter of 2022 was used for this analysis.

Photo by Adam Nowakowski on Unsplash

Snap Inc. (NYSE:SNAP) is an American social media and camera company that owns technology related products and services, such as Snapchat, Spectacles, and Bitmoji. On April 21, Snap Inc. (NYSE:SNAP) reported earnings for the first fiscal quarter of 2022. The company posted a loss per share of $0.02 and a revenue of $1.06 billion, falling below analysts’ predictions by $0.03 and $6.17 million, respectively.

In late May, Snap Inc. (NYSE:SNAP) issued guidance for a weaker Q2 and cut its sales and profit forecasts as compared to the previously issued numbers. The company blamed the broader macro environment, which has deteriorated far more than expected, for the slashed outlook. In this market, digital ad spend, which is one of the main sources of revenue for Snap Inc. (NYSE:SNAP), is highly impacted. Moreover, Apple’s initiative to keep their users from being tracked by apps like Snapchat also reduces the possibility of targeted advertising, further hitting the stock. Snap Inc. (NYSE:SNAP) stock has fallen about 69% year to date as of June 3.

According to Insider Monkey’s Q1 data, 54 hedge funds were bullish on Snap Inc. (NYSE:SNAP), compared to 55 funds in the earlier quarter. Billionaire Stephen Mandel’s Lone Pine Capital is the biggest stakeholder of the company, with 18.4 million shares worth $664.4 million.

Here is what Baron Opportunity Fund has to say about Snap Inc. (NYSE:SNAP) in its Q4 2021 investor letter:

“Snap Inc. is the leading social network among teens and young adults in North America and a growing number of overseas markets, including Western Europe and India. Shares fell this quarter on a greater than anticipated impact from Apple’s new privacy changes for iOS mobile devices. These changes made it more difficult for Snapchat to measure the effectiveness of ads shown on its platform. We believe this is a near-term, industry-wide issue for which Snap is already developing a solution. Longer term, we continue to view Snap favorably as the company sustains its rapid pace of product innovation and expands its premium partnerships with advertisers.”

Microsoft Corporation (NASDAQ:MSFT) is one of the biggest American technology firms, with a market capitalization of over $2 trillion. Microsoft Corporation (NASDAQ:MSFT) on June 2 announced a lower profit and revenue forecast for Q4, citing forex impacts. With the Fed’s tightening monetary policy coupled with geopolitical tensions, the dollar has gained about 14% against several foreign currencies. Since about half of Microsoft’s revenue is generated from outside the United States, the company lowered profit guidance for Windows products, cloud services, and personal computing.

According to Insider Monkey’s database, 259 hedge funds were bullish on Microsoft Corporation (NASDAQ:MSFT) at the end of March 2022, compared to 262 funds in the preceding quarter. Ken Fisher’s Fisher Asset Management is the leading stakeholder of the company, with 27.8 million shares worth about $8.6 billion.

Here is what Baron Opportunity Fund has to say about Microsoft Corporation (NASDAQ:MSFT) in its Q4 2021 investor letter:

“Shares of Microsoft Corporation, a cloud-software leader and provider of software productivity tools and infrastructure, rose during the quarter, following a strong earnings report highlighting solid demand for its broad product stack and continued momentum migrating its business to the cloud. Microsoft’s results continued to be strong across the board, with total revenue growing 20% in constant currency, beating Street estimates by 3%; an acceleration in Commercial Cloud revenue to 34% constant-currency growth; operating margins expanding to just under 45%; earnings growth of 23%; and free cash flow growth of 30%. We believe the company is positioned to deliver 13% to 15% organic growth over the next three years, underpinned by total addressable market expansion and continued market share gains across its disruptive cloud product portfolio.”

The Estée Lauder Companies Inc. (NYSE:EL) is a New York-based manufacturer and distributor of skincare, makeup, fragrance, and hair care products worldwide. The Estée Lauder Companies Inc. (NYSE:EL) reported its Q1 results on May 3, posting a GAAP EPS of $1.53, missing consensus estimates by $0.09. Revenue for the period came in at $4.25 billion, falling short of analysts’ predictions by $73.58 million.

The Estée Lauder Companies Inc. (NYSE:EL) slashed its full-year profit forecast on May 3, citing COVID lockdowns in China and the Russia-Ukraine war causing a dip in its sales. China generates about 36% of Estee’s sales, and the company’s Asia-Pacific sales declined for the first time in nearly two years due to lockdowns and supply constraints. The company reportedly plans to increase prices in July to account for soaring costs.

According to Insider Monkey’s Q1 database, The Estée Lauder Companies Inc. (NYSE:EL) was part of 46 public hedge fund portfolios, compared to 44 funds in the prior quarter. Terry Smith’s Fundsmith LLP is the leading position holder in the company, with almost 5.8 million shares worth $1.5 billion.

Here is what Harding Loevner Global Equity Fund has to say about The Estée Lauder Companies Inc. (NYSE:EL) in its Q3 2021 investor letter:

“We sold cosmetic producer Estée Lauder, which we bought last March. At the time, the market reflected a dire outlook for retail demand, especially tourist-related; however, we found its Chinese business attractive and admired its agility across social media and other digital channels. As the stock has appreciated, the resulting valuation now leaves no room for error, such as a potential shift of Chinese consumers’ tastes away from US brands.”

The stock slid after the Q1 results were announced, along with guidance for the rest of the year. The company projects declining gross margin amid higher than expected inflation. Colgate-Palmolive Company (NYSE:CL) expects raw material costs to increase by 22% on average this year, amounting to an additional $650 million. The company’s CEO Noel Wallace said that profit will be impacted due to rising logistics and input costs for the next multiple quarters.

Among the hedge funds tracked by Insider Monkey, Colgate-Palmolive Company (NYSE:CL) was part of 50 public stock portfolios, with collective stakes worth about $5.6 billion. Jean-Marie Eveillard’s First Eagle Investment Management is the leading shareholder of the company, with 11.2 million shares worth $856.6 million.

Along with its Q1 results, eBay Inc. (NASDAQ:EBAY) announced guidance for the remainder of the year. The company expanded massively during the last two pandemic years, but growth has slowed in 2022. The expected revenue for Q2 lies between $2.35 billion and $2.40 billion, compared to the market consensus of $2.54 billion. Similarly, the full-year projections also fall below Street estimates. The company cited normalized shopping patterns after the pandemic slowed, in addition to inflation and the Ukraine war for the softer demand. The tight labor market and the supply chain crisis also add to eBay Inc. (NASDAQ:EBAY)’s lower margin guidance.

According to Insider Monkey’s Q1 data, 44 hedge funds were bullish on eBay Inc. (NASDAQ:EBAY), compared to 53 funds in the prior quarter. Harris Associates is the leading stakeholder of the company, with 4.8 million shares worth about $279 million.

Here is what Steel City Capital had to say about eBay Inc. (NASDAQ:EBAY) in its Q4 2020 investor letter:

“eBay (Long): EBAY continues to be a core holding in the Partnership’s long book despite not having any “sexy” attributes or unknown catalysts. I like EBAY because it checks the boxes of being both capital light and priced as a value stock (low multiple of free cash flow), factors which are attractive in a potentially inflationary environment.

In 3Q’20 the company printed $2.6 billion of revenue vs. guidance of $2.4 billion (a $200 million beat) while full year revenue guidance was taken up by $400 million, implying 4Q’20 would be higher by $200 million as well. Free cash flow from continuing ops was guided to $2.3 billion for the full year, slightly above the $2.0 billion the business regularly generated before getting a Covid/stimulus related boost.

EBAY will have about $4.6 billion of cash on hand at year end 5 and should receive another $2.0 billion in after-tax proceeds this quarter related to the sale of its Classifieds portfolio 6. Additionally, the company will receive 540 million shares from Adevinta which are currently valued at ~$8.3 billion, and also holds a warrant to purchase a 5.0% stake in payment processor Adyen which was last valued at ~$775 million. Additional asset sales are also not out of the question 7. Backing everything out at today’s market cap of $38.2 billion gives a clean market cap for the core marketplace of $22.6 billion. At a minimum, I expect $2.0 billion of free cash flow in FY’21, with the potential for a higher figure to the extent the incoming administration is successful in cutting additional stimulus checks. By FY’22, free cash flow should ramp to $2.3 billion after incorporating a full year’s contribution from the managed payments initiative. This values EBAY at 9.6x free cash flow, or 11.7x excluding stock-based comp.”

Click to continue reading and see These 5 Companies Recently Cut Their Profit Forecast.

Disclosure: None. These 10 Companies Recently Cut Their Profit Forecast is originally published on Insider Monkey.