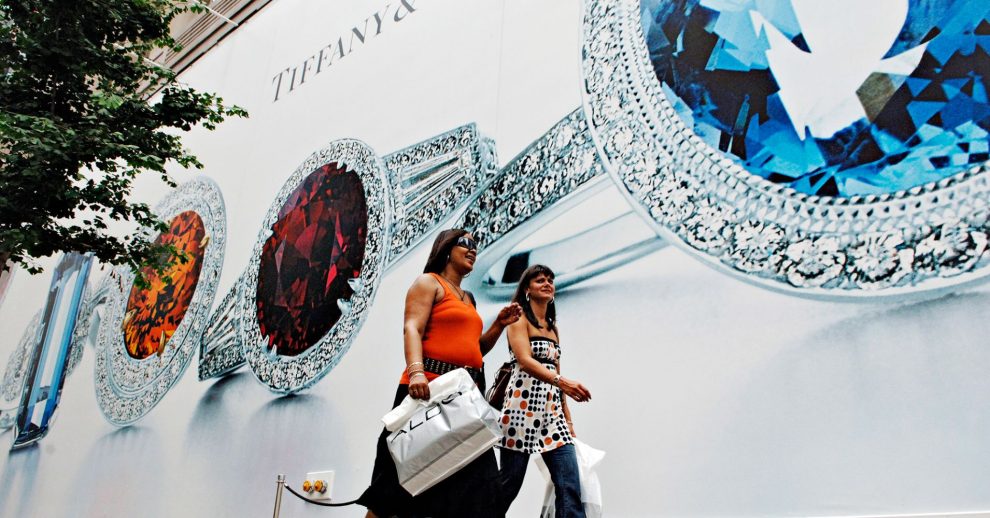 Tiffany's management team touts growth opportunities for the retailer, despite it reporting a 1 percent drop in sales worldwide during the holiday quarter, calling out "external challenges and uncertainties." Read more...

Tiffany shares bounced back Friday morning after management touted growth opportunities for the retailer, despite it reporting a 1 percent drop in sales worldwide during the holiday quarter, calling out “external challenges and uncertainties.”

as Chinese tourists spent less, and demand for its diamonds softened in Europe. The retailer has typically been reliant on Chinese shoppers to boost sales. But uncertain and ongoing trade talks between the U.S. and China have been a looming threat for luxury retailers, like Tiffany, which have benefited from the region in the past.

“I continue to strongly believe that Tiffany has vast global growth opportunities and we look forward to realizing our full potential in the future,” CEO Alessandro Bogliolo said on Friday. “What we are doing is to keep on working and investing on domestic customers,” or non-tourists, he said. And that’s going over particularly well in China, according to Bogliolo.

The luxury jewelry retailer said net sales fell to $1.321 billion during its fiscal fourth quarter, while analysts had been expecting sales of $1.332 billion, according to a Refinitiv survey.

Sales at Tiffany stores open for at least 12 months dipped 1 percent overall, while analysts had forecast growth of 0.8 percent.

During the fourth quarter, Tiffany said net sales in the Americas were flat compared with a year ago, in Asia-Pacific they were down 1 percent, in Japan they grew 3 percent, and in Europe they dropped 3 percent.

The company is expecting net sales worldwide to increase by a low-single-digit percentage in fiscal 2019, with net earnings declining during the first half of the year, due to “sales pressures” from lower tourism spending. Analysts had been calling for revenue to be up 6.9 percent for the year.

“A lot is going to happen in 2019,” Bogliolo said. “Our strategy is to renew our product offerings at a faster pace,” he said, in addition to opening more stores in “key cities” like Washington, D.C.

One analyst believes it will get easier for Tiffany, from here.

“While global demand headwinds have persisted from the second half of last year, we see expectations in equilibrium with reality at this point, and compares ease as 2019 progresses,” Telsey Advisory Group analyst Dana Telsey said in a research note. “We continue to believe that new marketing initiatives, product innovation, and investments in the store and digital experience are showing indications that a positive brand evolution remains underway.”

As of Thursday’s market close, Tiffany’s stock had rallied more than 24 percent so far this year.

NewsWatch: The Fed will make up to $4 trillion in loans to businesses to rescue economy, Mnuchin says

Can DoorDash Take On Amazon?