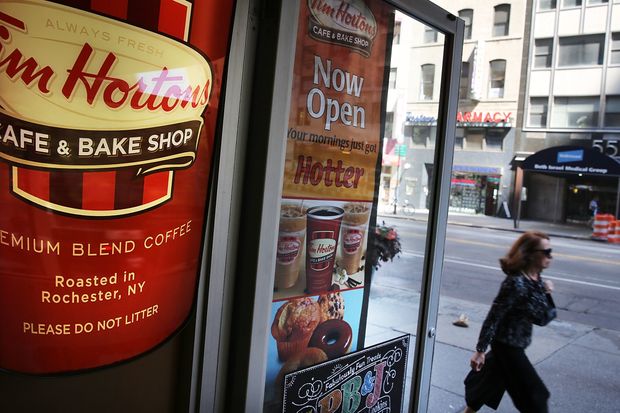 Tim Hortons is ending the practice of double cupping hot drinks, a move it says will eliminate hundreds of millions of cups from landfills each year. The Restaurant Brands International chain will instead provide customers with a thick paper sleeve. Read More...

Tim Hortons is ending the practice of double cupping hot drinks, a move it says will eliminate hundreds of millions of cups from landfills each year.

The subsidiary of Restaurant Brands International Inc. QSR, +0.42% will instead provide customers with a thick paper sleeve that protects hands from hot coffee, espresso, tea and other drinks.

Customers who ask for a beverage to be double cupped will now be prompted to consider using a sleeve instead, but will be given a second cup if they persist, officials at the Canadian chain with about 700 U.S. stores mostly in border states New York and Michigan said.

The coffee and breakfast chain’s move follows a similar shift earlier this year by Dunkin’, which said customers can no longer rely on a “double cup” assist to save tender hands from hot drinks, part of a green-minded phaseout of foam cups. The ban hit Dunkin’-lovin New England particularly hard, requiring some extra marketing and PR, but customers are slowly adopting new habits.

Read: Can Starbucks save the planet by cutting dairy? Activists and investors respond

Public reaction on social media for the Tim Hortons change was mixed as well, with some critiques wondering why double cupping wasn’t ended a decade or more earlier. Others said the heat from seeping tea is too much for the sleeves.

The company expects that stopping the practice of double cupping will save roughly 200 million cups from being tossed in the garbage every year.

Most recycling facilities in Canada don’t recycle single-use paper coffee cups because of a plastic coating inside.

The company is also in talks with suppliers about recyclable and biodegradable cups. Two pilot programs are in the works, one that will test a cup with a compostable liner and another made with 35% recycled materials.

As for other efforts tied to the recent waste-reduction week, Tim Hortons will soon roll out recyclable paper-based wrappers for sandwiches and bagels, eliminating about 460 metric tons of plastic from the waste stream each year.

Restaurant Brands International announced packaging changes for its Burger King chain as well. Customers can opt in for reusable packaging for sandwiches, soft drinks and coffee. They can then return the reusable sandwich container or beverage cup to Burger King restaurants to be cleaned and reused. The fast-food retailer is part of a partnership with TerraCycle’s zero-waste delivery platform called Loop and will be tried initially in New York, Portland and Tokyo.

Tim Hortons meanwhile plans to introduce early next year paper napkins that use 25% less material and are made up of 100% recycled fiber, which are estimated to save 900 metric tons of paper a year.

And the chain is phasing out plastic straws from its 4,000 restaurants across Canada. Once complete late next year, the switch will eliminate roughly 300 million plastic straws a year.

Behind the New Deal Between The Trade Desk and Amazon

SHAREHOLDER ACTION ALERT: The Schall Law Firm Announces it is Investigating Claims Against VMware, Inc. and Encourages Investors with Losses In Excess of $100,000 to Contact the Firm