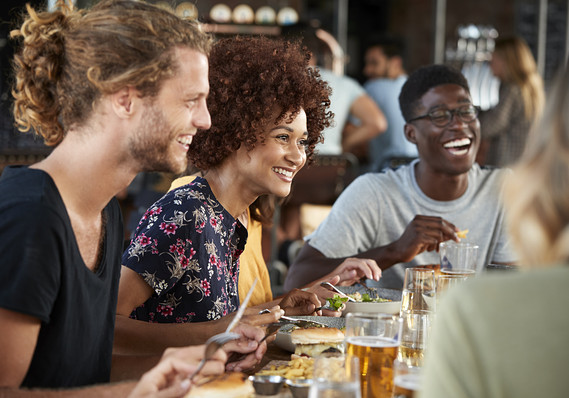 One innovative way to get the economy out of a recession is to send Americans a coupon to go out to eat. Read More...
List: The Top 50 Dividend Stocks

“Damn. The economy is recession. OK, honey, grab your coat, we’re going out to eat.”

Not exactly what you’d expect to hear in an economic downturn, but that might change.

With interest rates already so low, the Federal Reserve can’t fight a downturn by itself, and so economists are casting about for new ways that government spending can be used spur demand.

And funnily enough, one excellent way to get your local community humming would be to send everyone a $1,000 coupon to be used for dinner at restaurants of their choosing, said Gabriel Chodorow-Reich, an economics professor at Harvard University.

The coupon, which would expire in six months, gets money directly into the local economy. If you just gave households a debit card, they might buy a television that was made overseas, which dilutes the stimulus.

Restaurant spending has a very small import content as most cooks source locally. And restaurants are labor-intensive, so you’re putting money into workers pockets.

“It checks all the boxes,” Chodorow-Reich said in an interview with MarketWatch at the American Economics Association conference in San Diego.

The policy does have some drawbacks, Chodorow-Reich admitted. “If I was critiquing this policy, I’d call it the ‘let them eat cake’ policy,” he said, laughing.

It’s not the best thing to tell someone who has lost his job that you’re letting them go out to eat, he said.

There are political economy problems too as movie theater owners would revolt, he said.

For decades, it was the conventional wisdom that central banks like the Fed were the best institution to counter a downturn. The U.S. Congress was seen as too slow.

This thinking changed after the Great Recession in 2008, when interest rates set by the Fed got stuck at zero for seven years. The U.S. central bank tried unconventional policies, buying government bonds or quantitative easing, that proved politically unpopular.

At a panel at the American Economic Association, economists discussed a range of ideas to use fiscal policy to counter downturns.

Former U.S. Treasury Secretary Lawrence Summers suggested that Congress develop “semi-automatic stabilizers” or targeted spending that would be triggered automatically if there was a rise in the unemployment rate.

This would help get around the sometimes slow pace of Congressional decision-making.