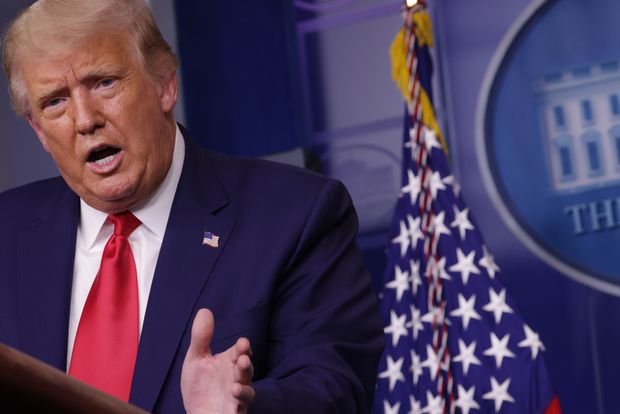 Dr. Scott Atlas, a member of the president’s coronavirus task force, also discussed the plan, noting he expects 700 million doses will be available by the end of March.

Earlier Wednesday, Redfield, head of the Centers for Disease Control and Prevention, told Congress that a vaccine may not be available to the general public until well into next year. Redfield also said a face mask could be “more guaranteed to protect me against Covid than when I take a Covid vaccine.”

Trump contradicted the statement and later mocked Joe Biden for often wearing a mask in public. When asked about Redfield’s comments, Trump claimed he was misunderstanding questions. “I believe he was confused,” Trump said.

When asked about Oracle’s ORCL, -0.83% potential deal with ByteDance for a stake in TikTok’s U.S. operations, Trump said he will be briefed on studies of the deal on Thursday. He said he “conceptually” wouldn’t like it if ByteDance maintained a majority stake, “assuming that ByteDance is China, which I think it is.”

Giving an update on COVID-19, Trump noted the national test positivity rate has fallen below 5%, while the number of hospitalized patients has declined 43% from mid-July.

The president tried to pin the blame for total COVID-19 deaths on “blue states,” arguing if you take out such areas — which include many of the largest cities by population, such as New York and Los Angeles — the death count would be far lower. He again urged Democratic governors to reopen their states.

Trump also congratulated the Big Ten conference for walking back its decision to postpone the fall football season, and pushed for the Pacific-12 Conference to follow suit.

“We started putting a lot of pressure on, frankly, because there was no reason not for it to come back,” Trump said.

Penn State, among the schools in the Big Ten conference, said the total number of COVID-19 cases at its University Park, Pa., campus hit 1,146 on Tuesday.

Need to Know: High volatility is here to stay in 2020. Goldman names 31 stocks to deliver the best returns amid the turbulence