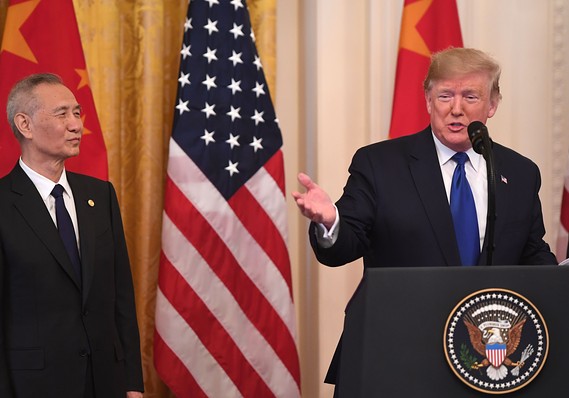 President Donald Trump on Wednesday signed a U.S.-China agreement that represents a truce in the long-running trade war between Washington and Beijing, calling it a “great deal for both countries.” Read More...

President Donald Trump on Wednesday signed the first stage of a U.S.-China agreement that represents a truce in the long-running trade war between Washington and Beijing, calling it a “great deal for both countries.”

Trump, joined at the White House by Chinese Vice Premier Liu He, called the deal “a landmark agreement” before an audience of lawmakers, corporate executives and administration officials. Both men signed the agreement in the ornate East Room.

The preliminary pact boosts Chinese purchases of U.S. agricultural, manufacturing and other goods, and includes enforcement mechanisms. China has pledged to increase its purchases of U.S. goods and services by $200 billion over two years.

See: What deals are in the U.S.-China trade pact signed Wednesday? Read the full text.

Though the deal cuts U.S. tariffs to 7.5% on around $120 billion in Chinese products, it keeps in place levies on some $360 billion of Chinese imports. White House economic adviser Larry Kudlow told CNBC the U.S. will take “proportionate actions” if China doesn’t live up to its commitments, and defended Trump’s use of import duties to spur Beijing to negotiate.

Now see: What the U.S.’s ‘Phase 1’ trade deal with China does and doesn’t do.

“The U.S.-China phase-one deal is essentially a trade truce, with large state-directed purchases attached. The truce is good news for the U.S. and the world economy,” said trade economist Mary Lovely of the Peterson Institute for International Economics, in a note.

“China will open itself even wider,” Liu said in his remarks at the White House.

Agriculture purchases represent $32 billion of the $200 billion total, and include oilseeds, meat, cotton and other commodities.

China also pledged to give U.S. companies more access to its financial-services sector, to refrain from devaluing its currency USDCNY, -0.1507%   to aid exporters and to stop forcing American firms to share their technology as a condition of doing business in China.

Kudlow told Fox News on Wednesday that Washington and Beijing will begin talks on phase two of the deal “immediately,” but Chinese media has reported those negotiations may not begin soon.

Trump said the tariffs that remain would be removed pending progress on the second phase of negotiations.

“We’re leaving tariffs on, but I will agree to take those tariffs off if we are able to do phase two,” Trump said.

Paul Ashworth, chief U.S. economist at Capital Economics, said the agreement “removes the downside risk of a never-ending escalation of tariffs imposed by the U.S. and China on each other’s imports.” But he sees little economic growth impact this year.

“The modest scale of the rollback of existing tariffs means that the deal will provide little, if any, boost to U.S. GDP growth in 2020,” he said in a note.

Trump was joined at the White House ceremony by the chief executives of companies including UPS UPS, +0.56% Honeywell HON, +0.16%   and Mastercard MA, +1.16%, who he called out by name in lengthy introductory remarks before signing the document.

Outside the Box: Considering a move for retirement? How to know if you’re ready or not

The Streaming Leaders Are Pulling Away From the Competition