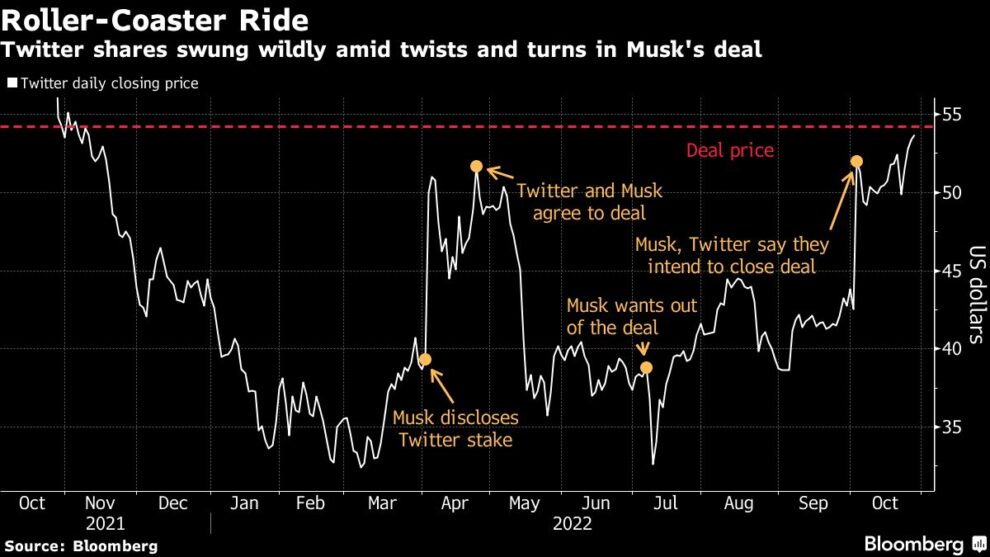 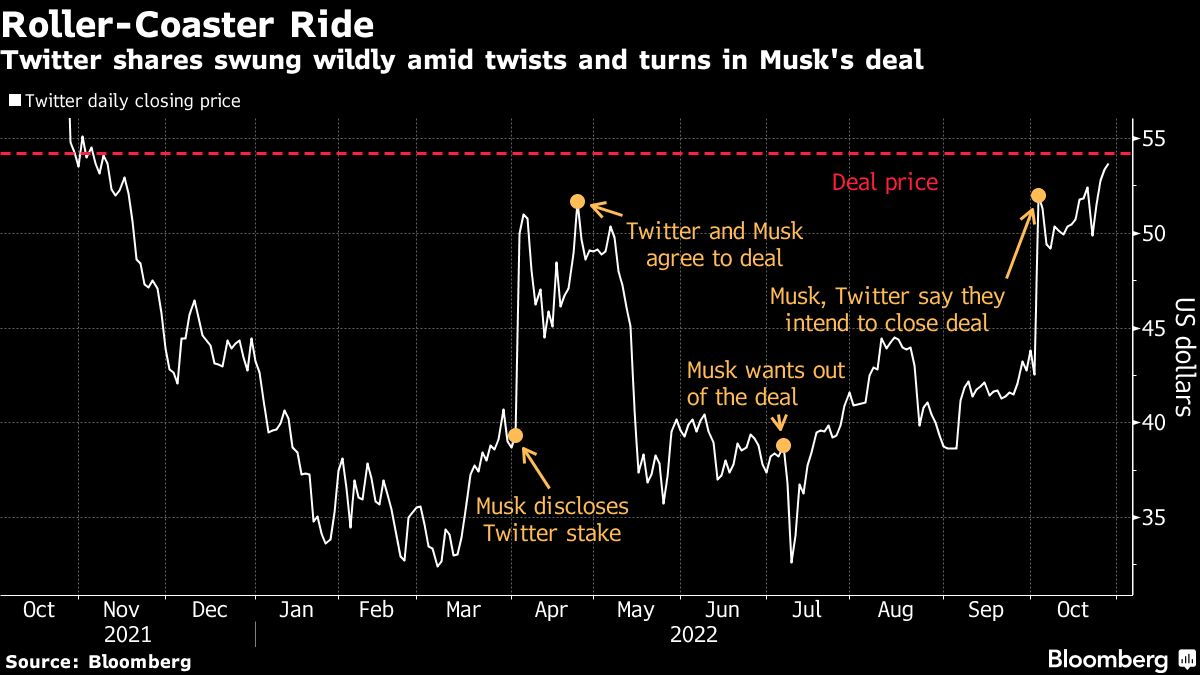 (Bloomberg) — Billions of dollars in arbitrage capital is looking for a new home after Elon Musk finally closed his $44 billion deal to buy Twitter Inc.

Merger arbitrage traders, who make money betting on the outcome of dealmaking among public companies, are now setting their sights on transactions involving Activision Blizzard Inc., VMware Inc. and Albertsons Cos. after enduring a months-long roller-coaster ride by Twitter’s stock, according to a Bloomberg News survey of 10 event-driven and risk-arbitrage trading desks this week.

The wide spreads on each of the deals — the difference between the purchase price and where the target’s stock is currently trading — means they offer the most potentially lucrative opportunities for arbs, as the traders are colloquially known.

For those who stuck to their wager that Musk would go through with the Twitter purchase, Friday was a triumphant moment to cash out and reap profits after months of uncertainty. The social media platform’s stock had a tumultuous stretch of trading as the world’s richest man tried to back out of the deal, with shares falling roughly 40% below the takeover price in July.

“For the merger arbitrage community, it is always good to see a problematic deal close — Twitter certainly having been in the problematic category,” said Brett Buckley, an event-driven strategist at WallachBeth Capital, who estimated billions of dollars from merger arbitrage funds were tied to the situation. Not everyone will have made money though, he said, due to the unpredictable developments that whipsawed the stock over the US summer.

Here’s a breakdown of the deals that will be next to capture traders’ attention:

Microsoft Corp.’s $69 billion purchase of Activision Blizzard, announced in January, is among the largest mergers in US history, and Warren Buffett is among investors who’ve snapped up Activision stakes in a merger arbitrage bet. The videogame company’s shares are still more than 22% below Microsoft’s offer price, driven by heightened antitrust scrutiny in the US and Europe. A broad slump in the technology industry is also pushing investors to price in a greater downside risk if the deal falls apart. The companies expect to close the deal in the first half of 2023.

Broadcom Inc. agreed to pay about $61 billion for VMware in May, in the biggest-ever takeover of a semiconductor maker. Given the cash-and-stock offer’s effective value of roughly $130 per share, VMware’s current trading price offers about a 13% upside to anyone willing to bet on the deal. The spread is likely to stay wide until the transaction clears some major regulatory approvals, given its size and the possibility of a lengthy review. But merger arbitrage specialists aren’t too concerned about antitrust risks, a Bloomberg News survey in May showed. The companies aim to wrap up the deal by November next year.

Kroger Co. this month announced plans to buy Albertsons in a deal valued at about $25 billion, including debt, combining the nation’s second and fourth-largest grocers. The merger has attracted skepticism from US senators and is expected to face tough antitrust reviews. Arbs initially sat on the sidelines because of a potential tax liability in Albertsons’ special dividend, but the window to receive that payout closed on Oct. 21, allowing speculators to wade back in. Albertsons’ shares are trading around $20.40 — well below the offer of $34.10, which included the special dividend. The transaction isn’t expected to close until 2024.

Arbs are also focused on Intercontinental Exchange Inc.’s acquisition of Black Knight in a $13 billion cash-and-stock deal, announced in May. First Horizon and Toronto-Dominion Bank are still in the process of closing the $13 billion combination they announced in February, while the planned $5.4 billion purchase of broadcaster Tegna by Standard General LP is pending approval from the Federal Communications Commission, among other regulators.