Massachusetts and a handful of other states gear up to fight gig companies that want to carve out new labor laws for gig workers. Read More... 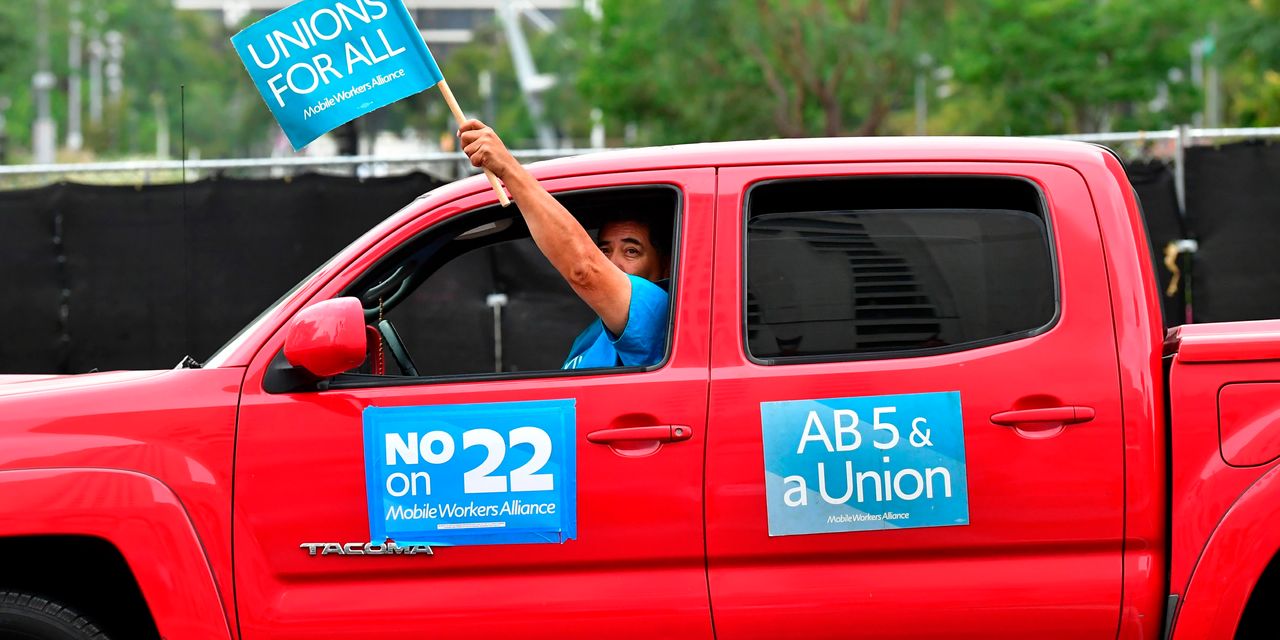 After Proposition 22 passed in California last year, gig companies vowed to try to expand what they call an independent contractor-plus model everywhere else.

But a recent California superior court ruling that Proposition 22, the most expensive ballot measure in state history, is unconstitutional and unenforceable may put a wrinkle in the plans of Uber Technologies Inc. UBER, -1.36%, Lyft Inc. LYFT, +0.95%, DoorDash Inc. DASH, +3.21% and others. Or so their opponents hope.

“The decision in California creates a huge political problem [for the companies],” said Mike Firestone, director of the Coalition to Protect Workers’ Rights, a group formed to fight the gig companies backing a Prop. 22-like initiative in Massachusetts, where gig companies got the necessary certification this month to start collecting signatures for the measure they want to put on the ballot for next year’s elections.

The gig companies, which have said they plan to appeal the California ruling, rely on treating their workers as independent contractors instead of employees and do not pay taxes that contribute toward states’ worker-compensation funds, unemployment insurance and other costs other employers bear. The gig companies have long fought to preserve their business models, and their successful $200 million-plus ballot campaign in California emboldened them to try to replicate their efforts elsewhere — which have worker organizers, labor leaders, lawmakers and others gearing up for a fight.

The industry-backed Massachusetts Coalition for Independent Work said the Prop. 22 ruling in California has no impact on the companies’ ballot proposal in Massachusetts. “The two states have different constitutions, and the provisions of Prop. 22 that the lower court took issue with are not part of the Massachusetts proposal,” a spokesman said.

Alameda County Superior Court Judge Judge Frank Roesch wrote in his Aug. 20 decision that the gig companies overreached with Prop. 22, including by taking away the California legislature’s power to regulate workers’ compensation and collectively bargain.

Besides Massachusetts — where U.S. Sen. Elizabeth Warren has called on the gig companies to drop their ballot measure — other states that could see similar efforts include Colorado, Illinois, New Jersey and Washington.

In Washington state, a Seattle City Council committee on Tuesday discussed a draft proposal to raise gig workers’ pay to minimum wage plus tips, give them protection against app deactivations and more. According to the proposal, Seattle city officials want to ensure gig workers who “struggle to meet their households’ most basic needs” can fully participate in civic life, thus “benefiting the economy overall.”

Also part of the draft legislation is something that seeks to avoid what Prop. 22 did in California: “The city intends to retain the current definitions of worker classification under Seattle’s labor standards and does not intend to create a new classification of workers distinct from employees or independent contractors.”

In Illinois, an industry-backed political action committee called Illinoisans for Independent Work has run some ads and is trying to “pump up the gig economy as a great employer of the people,” state Sen. Cristina Castro told MarketWatch. But she said the Illinois legislature had been exploring how to ensure gig workers have the same rights and benefits as employees, and she expects legislative action at the end of the year or early next year.

“It’s a bipartisan issue,” she said. “If you look at it, a lot of people don’t know how the gig economy impacts the overall economy. I’ve had to do a lot of educating. It’s flexible work, but you have a lot of low-income folks and people of color using five different platforms to try to put together a living.”

If voters keep getting asked to decide how gig workers should be treated, labor experts are pointing out what’s at stake.

Michael LeRoy, a labor and law professor at the University of Illinois at Urbana-Champaign, called Prop. 22 “a special-interest law that creates more burdens on the social safety net that responsible employers have no choice but to pay into.”

California’s Prop. 22 — which exempts the gig companies from a law that would have required them to classify their workers as employees — was supposed to boost Uber and Lyft drivers’ pay to 120% of the minimum wage, contribute toward their health benefits and more. But since California voters passed it in November, drivers have continued to complain about low pay. And many of them don’t qualify for the health-benefits stipend promised under Prop. 22 because as low-income earners, they are on Medi-Cal.

The Protect App-Based Drivers & Services Coalition, which is backed by Uber and Lyft, has said “thousands” of drivers in California have received health-care stipends so far. Meanwhile, California voters who voted for Prop. 22 have said they felt deceived by the ballot measure campaign, and that they thought they were helping drivers.

In other legislative action, a New York state senator in June dropped her effort to introduce a bill backed by the gig companies that would’ve allowed gig workers collective-bargaining rights but keep them as independent contractors. Some labor groups and others objected to continuing to deny gig workers full employment protections.

Kjersten Forseth, a spokeswoman for the AFL-CIO in Colorado, said that’s not something the union would support in that state, where the gig companies have set up a PAC but have not indicated whether they will pursue a ballot measure or go the legislative route.

“That doesn’t seem to be a fair tradeoff for drivers,” she said, and warned against what she called a bait and switch. “When [the companies] say they’re codifying independent contractor status, they’re making them employees without giving them rights.”

Massachusetts lawmakers are considering bills that would give drivers collective bargaining rights but don’t address their employment classification.

“We support all efforts at the state and federal level to secure fundamental labor rights for app-based workers,” Firestone said.

This story has been updated to add more information.

Former AWS veteran Charlie Bell to head cybersecurity ops at Microsoft
Crypto: At end of the day, if bitcoin is successful governments will ‘kill it,’ says Ray Dalio
Comment

AI Is the Next Accelerator for Digital Transformation, Says Microsoft’s Haupter

Dispatches from a Pandemic: ‘I’ve been ready for this since this was declared a pandemic’: J&J’s one-shot COVID-19 vaccine is enticing for people who hate needles

This Low-Risk Stock Is a Long-Term Winner