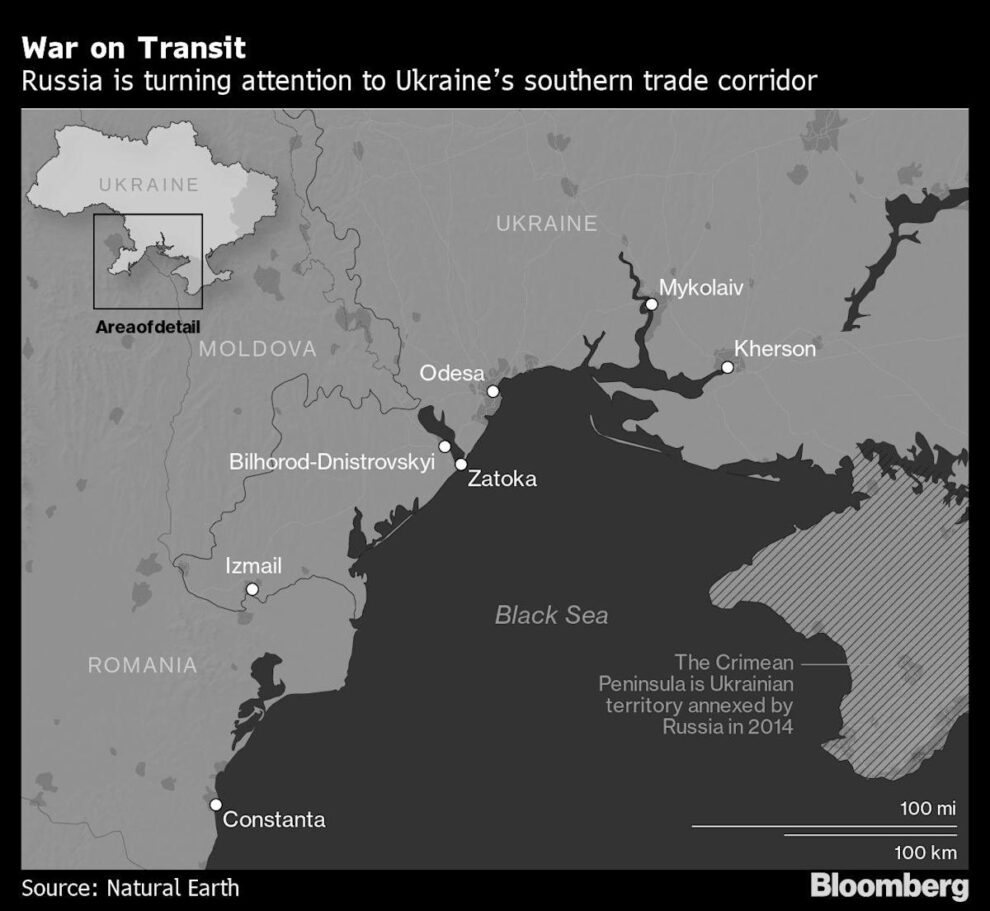 (Bloomberg) -- European Union leaders agreed to pursue a ban that would halt the imports of most Russian oil, in a move designed to hit the country’s coffers and pave the way for a sixth package of sanctions to punish it and President Vladimir Putin for the invasion of Ukraine.Most Read from BloombergStocks Trim Gains as Inflation Concerns Increase: Markets WrapNATO Should Think Twice Before Accepting Finland and SwedenBiden to Meet Powell to Discuss Economy as Inflation BitesWorld’s Riskiest Pl Read More... 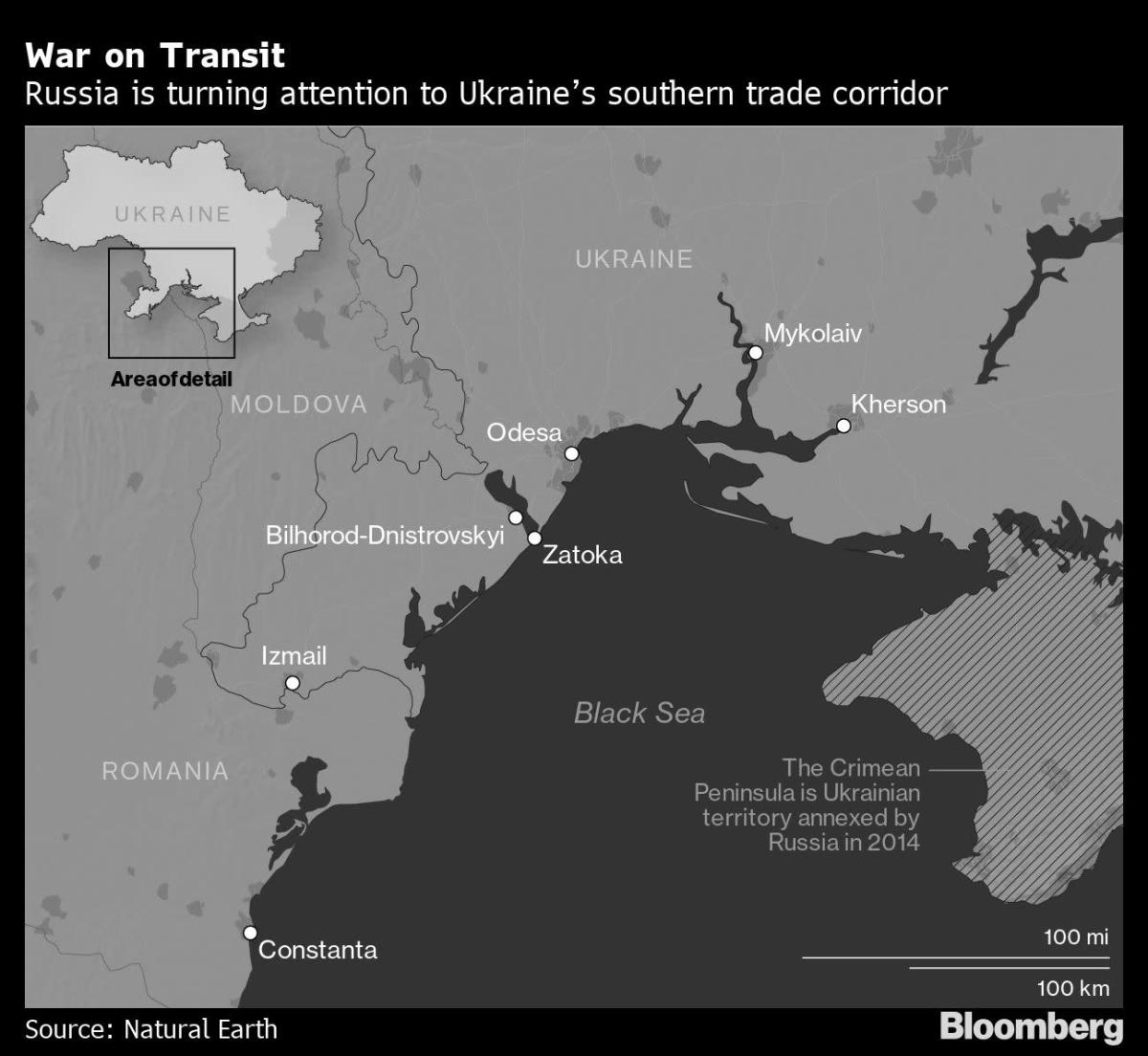 (Bloomberg) — European Union leaders agreed to pursue a ban that would halt the imports of most Russian oil, in a move designed to hit the country’s coffers and pave the way for a sixth package of sanctions to punish it and President Vladimir Putin for the invasion of Ukraine.

Oil headed for the longest run of monthly gains in more than a decade on the EU’s move that was reached during a leaders’ summit in Brussels. Members overcame objections from Hungary, which had been blocking an embargo as it sought assurances its energy supplies wouldn’t be disrupted.

President Joe Biden said the US would not send Ukraine “rocket systems that can strike into Russia,” seemingly quashing reports the administration would consider long-range weapons in a new assistance package. Ukraine has repeatedly called for more offensive weapons as it battles Russian troops in the east.

West Texas Intermediate rose toward $118 a barrel, up from $115.07 on Friday. There was no settlement on Monday due to a US holiday.

Crude has soared this year as the conflict in Europe tightened global supplies at a time of rising demand, depleting stockpiles and boosting product prices to all-time highs. US benchmark WTI is on course to close out a sixth monthly climb in May, the best run since 2011.

The EU sanctions would forbid the purchase of crude oil and petroleum products from Russia delivered to member states by sea but include a temporary exemption for pipeline crude, European Council President Charles Michel said late Monday during a summit in Brussels. Officials and diplomats still have to agree on the technical details and the sanctions must be formally adopted by all 27 nations.

“This immediately covers more than 2/3 of oil imports from Russia, cutting a huge source of financing for its war machine,” Michel said in a tweet. “Maximum pressure on Russia to end the war.”

Recep Tayyip Erdogan, the president of Turkey, said Sweden and Finland’s “uncompromising insistence” to join NATO has added an “unnecessary item” to the alliance’s agenda, according to an op-ed published in the Economist.

Turkey is threatening to block the Nordic nations from joining NATO because it would increase security risks for the country and NATO’s future, Erdogan said in the article. Ankara has insisted that any new candidates for NATO membership recognize its concerns about Kurdish militias, a stance that has been a major source of tension.

Russia “bets on chaos” by making energy prices skyrocket and nudging Europeans to protest their governments, Volodymyr Zelenskiy said in a video address to the European Council where he urged officials to adopt the sixth sanctions package, which would include restrictions on Russian oil.

Russia uses citizens of Africa and Asia as hostages, pushing them toward famine by blocking food supplies from Ukraine as a means of triggering a new wave of mass migration to Europe, Zelenskiy said. “Food safety can’t be secured without halting Russia’s war against Ukraine,” he said.

US investor Todd Boehly has completed his $4.25 billion ($5.4 billion) takeover of Chelsea Football Club from the sanctioned Russian oligarch Roman Abramovich, who was forced to put the team up for sale before being sanctioned in the UK’s response to Russia’s invasion of Ukraine.

The deal ends almost 20 years of ownership under billionaire Abramovich, during which the club rose to become one of the dominant forces in the English Premier League. It also represents another instance of wealthy Russians being forced from high-profile positions in western countries as a result of President Vladimir Putin’s war.

Biden Says No to Long-Range Rocket Systems for Ukraine (5:31 p.m.)

Ukraine has been calling for weeks for longer range multiple launch rocket, or MLRS, systems it says are needed to halt Russian advances in the east. The US president told reporters that America would not send “rocket systems that can strike into Russia.”

The comment seemed to contradict previous reports the US would consider offering Ukraine the systems — some of which have a range of 300 kilometers — as part of a new military aid package expected to be announced within days.

After cutting gas supplies to Poland, Bulgaria and Finland, Russia has now warned it will halt pipeline shipments to a Dutch energy firm. GasTerra will stop receiving supplies from Gazprom on Tuesday after refusing to accept new payment terms imposed by Russia including opening a rubles account with Gazprombank.

The move will remove about 2 billion cubic meters of gas from the market from now until Oct. 1, when GasTerra’s contract with the Russian gas giant was set to expire.

Europe’s avoidance of the country’s supplies is forcing barrels on longer routes to willing buyers in Asia, with India the biggest market for crude from western Russia.

Overall crude shipments edged higher in the seven days to May 27, largely shrugging off mid-month EU restrictions that trading houses see as prohibiting them from dealing with Russian state energy companies.

Prime Minister Kaja Kallas, who has seen her popularity soar at home and abroad as she urges EU nations to do more to confront Putin, signaled she’d seek to end her coalition if the Centre Party under former Premier Juri Ratas wins a parliamentary vote on a family benefits package with help from the opposition.

“Politics is so that one day you’re in power and the next day, you’re not — so I can’t be sure of that,” Kallas told Bloomberg Television. A government collapse would leave the Baltic nation potentially rudderless at a time of heightened security risks and record inflation.

“There is no compromise at this moment at all,” the Hungarian prime minister said on arrival at the EU summit in Brussels. “There is no agreement at all.”

While he said a European Commission proposal to impose an embargo on Russian crude purchases was no longer an “atom bomb” hurled at the Hungarian economy, he echoed the sentiments of other EU leaders that a deal wouldn’t be clinched at the meeting.

Russia has likely lost around one third of the ground combat forces it committed on Feb. 24, according to a senior NATO official. Still, its troops are slowly and incrementally gaining territory in the east and the limited terrain captured is militarily important to press a sustained offensive, the official told reporters.

Moscow also appears to be mobilizing Soviet-era T-62 battle tanks from storage, which are likely to be vulnerable to anti-tank weapons. That shows its shortage of modern combat equipment, the official said.

The operator of Russia’s Sakhalin-2 liquefied natural gas plant stopped supplying the fuel to a former Gazprom PJSC trading unit seized by Germany, according to people with knowledge of the matter.

Sakhalin Energy isn’t loading LNG vessels for Gazprom Marketing & Trading Ltd. due to sanctions imposed by Moscow, said the people, who asked not to be identified discussing sensitive matters.

The Sakhalin-2 plant on the Pacific coast mainly supplies customers in Japan, South Korea and China.

The ruling coalition and the main opposition conservatives sealed a deal on enshrining a 100 billion-euro ($107 billion) fund to boost military spending in the constitution amid continued criticism over delays in supplying Ukraine with promised heavy weapons.

Germany announced plans to supply heavy weaponry a month ago. But so far, none of the seven armored howitzers and an initial 15 Gepard armored vehicles have been delivered. Defense Minister Christine Lambrecht said that Ukrainian soldiers need to undergo a 40-day training program to use the howitzers, while the vehicles aren’t yet in condition to be sent.

Pimco’s Income Fund already had almost $1 billion of bets on Russia via credit-default swaps coming into the year, and added a net $106 million in the first quarter, according to documents filed this month with the Securities and Exchange Commission. The bulk of the new swaps were sold in January, with some added in February before the war began, according to a person with direct knowledge of the matter.

The embargo would cover seaborne oil, which makes up two thirds of the bloc’s oil imports from Russia, according to an official who spoke on condition of anonymity to discuss the negotiations.

Some temporary exceptions would be granted to several members that will take more time to resolve. It’s unclear whether Hungary — which has resisted supporting the ban citing its dependence on supplies from Moscow — is on board. All 27 members must agree on sanctions.

The Prosecutor General of Ukraine says it has sent for a court trial the first case of an alleged wartime rape. The trial will be held in-absentia, as the accused Russian soldier is not in Ukraine’s custody.

Denmark could be the next country cut off from Russian natural gas as its biggest utility is refusing to cave in and make payments in rubles. Orsted A/S is preparing for Gazprom PJSC to cut off one of Denmark’s biggest sources of the fuel, the firm said in a statement, adding it expects it will be able to secure alternate sources of supply in the European wholesale market. The payment deadline is Tuesday and the company said it will continue to pay in euros.

Daily power prices in Finland surged after Russia suspended energy exports to its western neighbor earlier this month. European nations are split over how to handle Moscow’s demand that all payments for the fuel should be made in the local currency, and utilities have responded to the challenge differently.

Russian oil giant Rosneft PJSC promised record dividends on the back of soaring prices, but some foreign investors may struggle to access the payout.

The board recommended 23.63 rubles a share for the second half of 2021, bringing full-year dividends to an all-time high of 41.66 rubles. That follows an announcement last week by Gazprom, which proposed its highest ever payout after benefiting from a supply crunch in Europe.

Part of last year’s grain harvest is being shipped from the southern Kherson region to Russia, Tass reported, citing Kirill Stremousov, a representative of the occupation administration there. Ukrainian farmers and officials have accused Russia of confiscating and stealing grain from areas it has seized. Russia almost completely occupies Kherson and Stremousov is deputy head of the administration.

Separately, Taras Kachka, a deputy Ukrainian economy minister, called for warships to patrol the Black Sea to protect vessels carrying food exports from Russian attacks. His comments on Facebook followed reports of multiple Russian air strikes on a bridge in Zatoka between the Black Sea and the Bilhorod-Dnistrovskyi estuary, which is key for Ukrainian export shipments.

Russian troops continue to advance toward the city center in Sievierodonetsk in the eastern Luhansk region, according to Serhiy Haiday, the local governor. “Battles are continuing, the situation is very difficult,” he said on his Telegram channel.

The city’s infrastructure has been ravaged, with 60% of residential buildings so severely damaged that they can no longer be repaired, Haiday said, adding that about 1 million of people in the occupied areas of Luhansk remain without a functioning water supply.