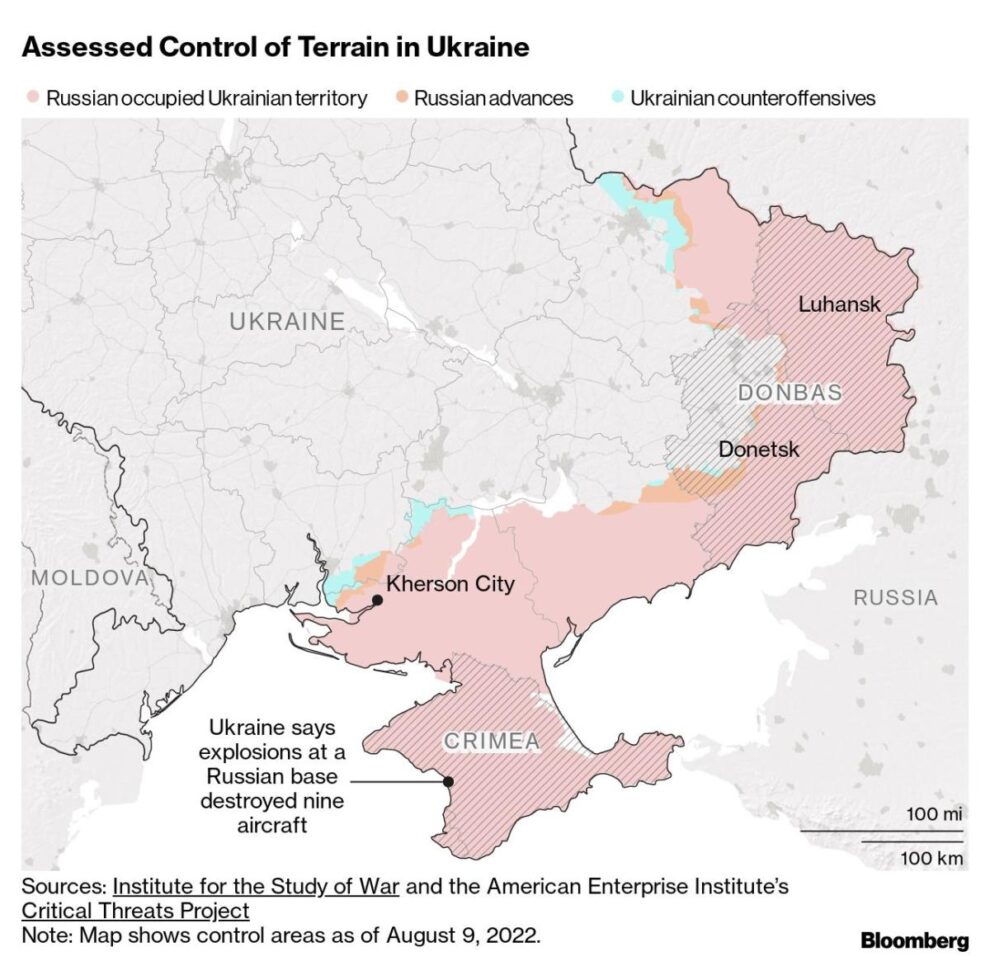 (Bloomberg) -- The US is preparing $800 million in additional military aid to Ukraine, with an announcement possible as soon as Friday, Reuters reported. November’s G-20 meeting in Bali is shaping up as a showdown between Russian President Vladimir Putin and US President Joe Biden. Most Read from BloombergApple Targets Sept. 7 for iPhone 14 Launch in Flurry of New DevicesXi and Putin to Attend G-20 Summit in Indonesia, Jokowi SaysCovid’s Harmful Effects on the Brain Reverberate Years LaterBiden Read More... 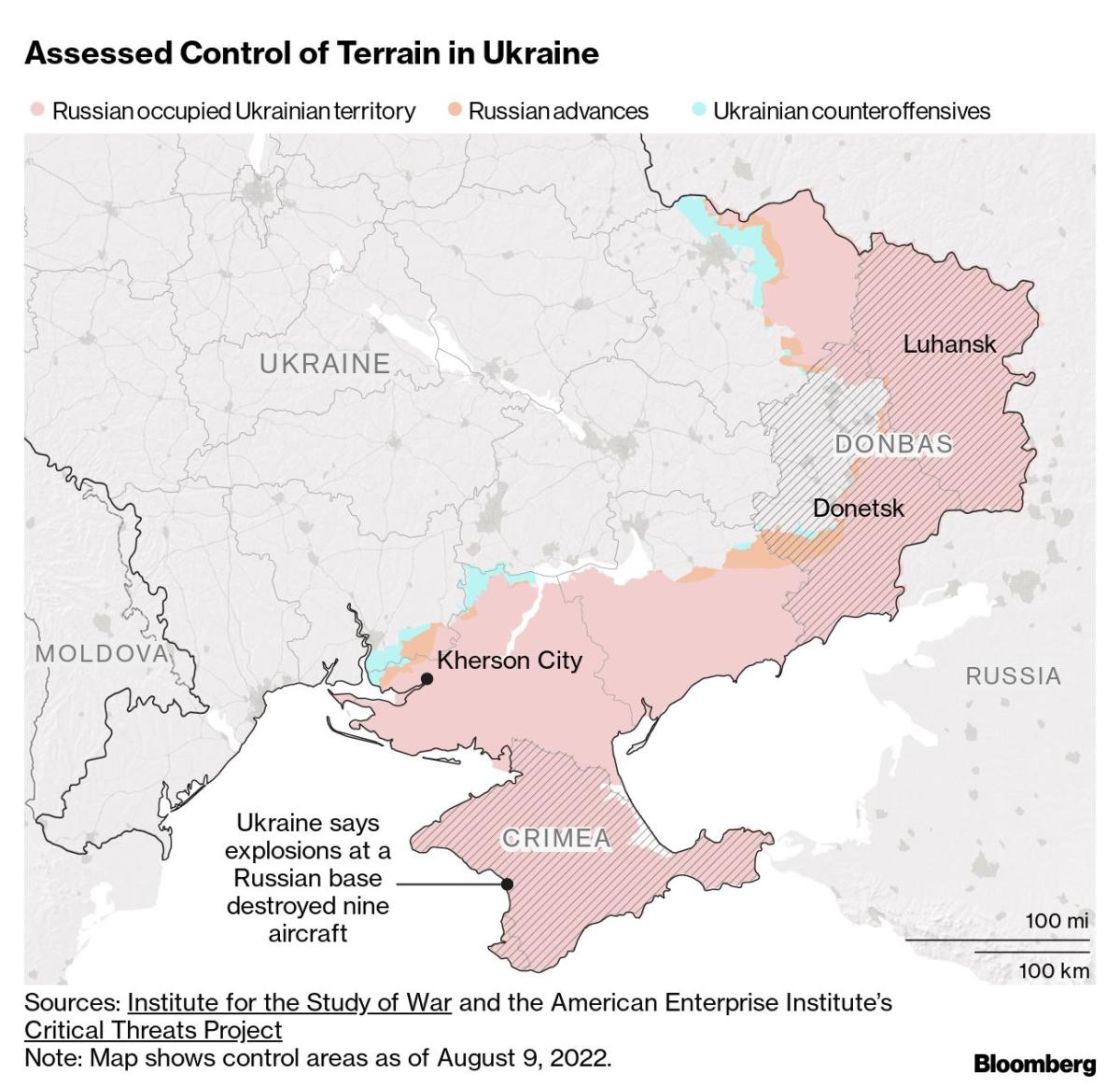 (Bloomberg) — The US is preparing $800 million in additional military aid to Ukraine, with an announcement possible as soon as Friday, Reuters reported. November’s G-20 meeting in Bali is shaping up as a showdown between Russian President Vladimir Putin and US President Joe Biden.

European intelligence officials say Russia is likely to continue to spread disinformation falsely painting as reckless Ukraine’s actions toward the Zaporizhzhia nuclear power plant. Ukraine says Russia has sporadically shelled the plant for weeks, even as it uses the facility to shield and rest its troops without fear of reprisal close to the sensitive facility.

As the Russian invasion of Ukraine approaches the six-month mark, explosions were reported at an ammunition depot in the Belgorod region in southwest Russia late Thursday. Ukraine’s air defense systems worked overnight in Kerch close to bridge between Crimea and Russia. A drone was shot down around Belbek Airbase, near Sevastopol in Crimea, Russian occupation authorities in the peninsula said. There were no claimed or assessed Russian territorial gains in Ukraine on Aug. 18, for the first time since July 6, the Institute for the Study of War said. Russian forces continued offensive operations north, west, and southwest of Donetsk City. The number of casualties after shelling in Kharkiv residential areas over the past two days rose to 20, Interfax reported, citing regional police.

Russia’s war has answered a fundamental question that NATO states had been asking for years: whether older members like the US, France and Germany will fight for less wealthy ex-communist allies if they’re attacked.

But it has raised others, including whether the alliance is doing enough to deter Russian expansionism after years of underinvestment and ignored warnings, and whether the effort to reinforce the previously neglected Black Sea region should have happened long ago.

The newly opened crop-export corridor shows initial success, with more than 500,000 tons exported from Ukraine’s major Black Sea ports in the first half of August. While that’s far below a normal pace, prospects for an acceleration in flows are weighing on grain prices, helping to ease food inflation concerns.

Russia’s Vladimir Putin and China’s Xi Jinping both plan to attend a Group of 20 summit in Bali in November, Indonesia’s president said.

The presence of Xi and Putin would set up a showdown with US President Joe Biden and other democratic leaders, all of whom are set to meet in person for the first time since Russia’s invasion of Ukraine.

The US is preparing $800 million in additional military aid to Ukraine and could announce it as soon as Friday, Reuters reports citing three sources familiar with the matter.

Moscow’s troops are likely using the Zaporizhzhia nuclear power plant in southern Ukraine to shield its troops and equipment, undermining the safety of the plant’s operations, according to European intelligence officials.

European intelligence has also assessed that Russia is likely to continue to spread disinformation falsely painting Ukraine’s actions toward the plant as reckless, the officials said.

Russian state Twitter accounts have repeatedly accused Kyiv of targeting the facility, including with Western weapons, and Moscow has warned of unsubstantiated false-flag operations.

Turkish President Recep Tayyip Erdogan said he discussed avenues to end the Russian-led war during talks with his Ukrainian counterpart, as well as conditions for a possible prisoners exchange.

The comments came after the Turkish leader met in the western Ukrainian city of Lviv with President Volodymyr Zelenskiy and United Nations Secretary General Antonio Guterres on Thursday. Erdogan said he would follow up on the discussions with Putin.

The UM will establish a fact-finding mission at the site of the Olenivka prison, where some 50 Ukrainian POWs died in an attack last month, said UN Secretary General Antonio Guterres.

“We will now continue to work to obtain the necessary assurances to guarantee secure access to Olenivka,” Guterres said in Lviv. “That means safe, secure and unfettered access to people, places and evidence without any interference from anybody.”

While Ukraine and Russia have traded blame for the incident, European intelligence has dismissed Moscow’s claims that ammunition provided by the US were used to hit the facility, following analysis of the damage captured by satellite images.

Commenting on Telegram after speaking with Antonio Guterres, President Volodymyr Zelenskiy said he discussed with the UN Secretary-General António Guterres the forced deportation of Ukrainians, the need to release Ukrainian soldiers and medics from Russian captivity, and continued exports of grain from the Black Sea.

“Particular attention was paid to the topic of Russia’s nuclear blackmail” at the Zaporizhzhia plant, Zelenskiy said, adding that the UN “must ensure the security of this strategic object, its demilitarization and complete liberation from Russian troops.”