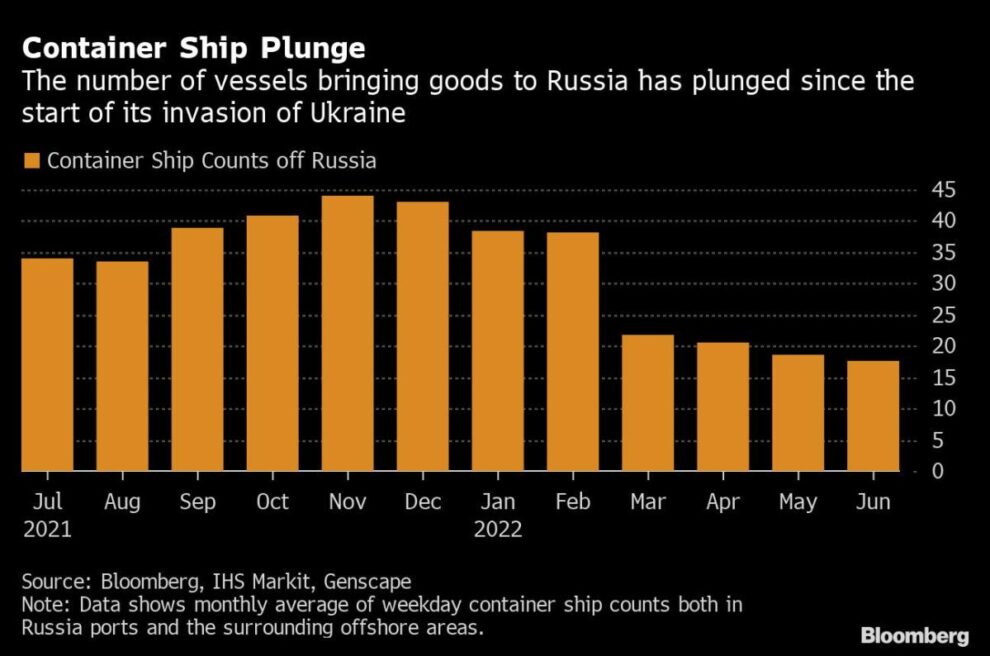 (Bloomberg) -- US Secretary of State Antony Blinken raised concern of a “sham trial” after two captured British fighters and a Moroccan were sentenced to death by a court in the Russian-occupied Donetsk region of Ukraine. Most Read from BloombergEating Two Portions of Fish Per Week Linked to Deadly Skin CancerWhy Inflation Is Hitting American Households Like Never BeforeMeta Halts Development of Apple Watch Rival With Two CamerasTarget Tries to Save Itself by Putting Everything on SaleChina Weig Read More... 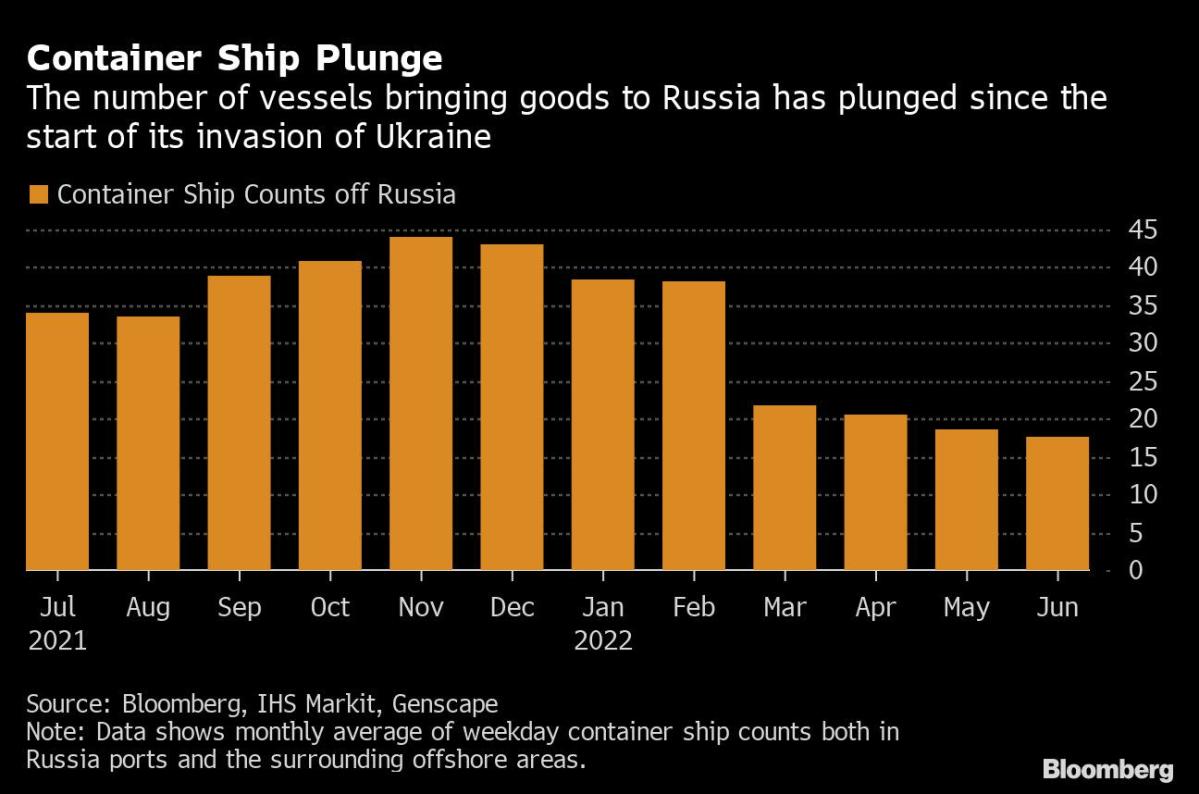 (Bloomberg) — US Secretary of State Antony Blinken raised concern of a “sham trial” after two captured British fighters and a Moroccan were sentenced to death by a court in the Russian-occupied Donetsk region of Ukraine.

Russian troops are fighting to capture the city of Sievierodonetsk, and launched an offensive on Slovyansk, in an effort to take remaining Ukrainian positions in the east. The Kremlin is tightening control in two occupied regions of Ukraine by installing former Russian officials in top jobs.

Ukraine is seeking a new deal from the International Monetary Fund to shore up its war-ravaged finances and its government said the economy shrank more than 15% from a year earlier in the first quarter of 2022.

Ukraine must clinch a new loan program with the IMF, the country’s finance chief said, as efforts to fight off invading Russian forces push its budget and international reserves to the limit.

Finance Minister Serhiy Marchenko said Kyiv needs more foreign aid from its longstanding donor, and preliminary discussions on a new assistance package are under way. His statement followed an appeal by central bank Governor Kyrylo Shevchenko, who called last week for a new deal with the Washington-based lender.

Two captured British fighters Aiden Aslin and Shaun Pinner were sentenced to death by the court in the so-called Donetsk People’s Republic. It said the Britons and Moroccan Saaudun Brahim were convicted of fighting as “mercenaries” for Ukraine, Russia’s Tass news service reported, saying they could appeal and were eligible to be pardoned.

Blinken tweeted: “We are gravely concerned by reports of a sham ‘trial’ and its judgements against lawful combatants serving in Ukraine’s Armed Forces.” The UK Foreign Office said it was working with Ukrainian authorities on the detained British nationals.

Pinner and Aslin were taken prisoner by Russian forces after fighting over the southern Ukrainian city of Mariupol in April. Both were later shown in detention on Russian state TV. Aslin served as a marine in Ukraine’s military for four years after moving to the country in 2018, UK Member of Parliament Robert Jenrick said on Twitter in April, citing the captive’s family. UK media have reported that Pinner is a former British soldier who also moved to Ukraine about four years ago.

Group of Seven leaders at their meeting later this month in Germany will look at a supporting route via a Romanian port to export grain now being halted by Russia’s blockade of Ukrainian ports on the Black Sea, the Sankei newspaper of Japan reported, citing a government official it didn’t identify.

Poland’s Gdansk port and Romania’s Constanta have been crowded with commodities from Ukraine as supplies have been re-routed, Ukraine’s deputy minister of infrastructure said last month.

“The UK is very likely to go along with such a ban and that could have the effect of locking in a good deal of Russian oil,” Yellen said at an event organized by the New York Times.

Two days after the invasion began, the first shipment of Amazon Web Services’ suitcase-sized “Snowball” data-transfer devices crossed from Poland into Ukraine, the start of an effort to help safeguard data at risk of being destroyed or falling into Russian hands, the company said in a blog post on Thursday.

Ukraine’s economy shrank 15.1% from a year earlier in the first quarter of 2022, according to preliminary figures from the state statistics institute. It’s the first official reflection of the economic damage caused by Russia’s invasion in late February. GDP rose 6.1% in the fourth quarter of 2021.

Russia now occupies 20% of Ukrainian territory and severe battles continue in the country’s eastern provinces, while grain exports have been blocked. The World Bank has estimated that Ukraine’s economic output may slump by 45% this year.

The National Bank of Ukraine bought 70 billion hryvnia ($2.4 billion) of government bonds to help finance the budget, the most since Russia’s invasion in February. That brings its portfolio of public debt to 190 billion hryvnia

The central bank said it had to increase purchases due to “significant budget needs and a decrease of revenues amid reduced taxes, insignificant amounts of market borrowing and a slowdown” in international aid flows.

The bank reiterated its call for the government to raise the coupon on its domestic debt to attract investors and ease pressure on the hryvnia and inflation. The Finance Ministry’s latest sale of war bonds on Tuesday raised the smallest sum so far.

The European Union’s executive arm is expected to recommend next week that Ukraine be granted candidate status. The recommendation still needs to be debated and adopted by EU commissioners. A final European Commission opinion, even if positive, would need the approval of member states before Ukraine is officially granted the status.

The bloc’s leaders are set to discuss the matter in Brussels on June 23-24 and several countries have said they’re against the move, saying Ukraine can’t be given preference over existing applicants.

In a diplomatic note seen by Bloomberg, Denmark said Ukraine does not sufficiently fulfill criteria related to the stability of institutions guaranteeing democracy, the rule of law, human rights and respect for and protection of minorities. Kyiv will need to “fundamentally improve its legislative and institutional framework” to progress on all these areas, the note says.

Moscow-backed separatist governments in two occupied regions of Ukraine’s Donbas have installed former Russian officials in top jobs, the latest sign of the Kremlin’s tightening control over the territories held by its forces.

The so-called Donetsk People’s Republic appointed a former official of Russia’s Ministry of Industry as its prime minister this week, as neighboring Luhansk installed a former deputy governor from Russia as a top official. A Kremlin spokesman confirmed the appointments were coordinated with Moscow.

The Kremlin has kept a firm grip on the breakaway regions since backing their creation in 2014 but Moscow has taken an even greater role in the months following the Feb. 24 invasion, which has expanded the area under Russian control. Local officials in the occupied zones have suggested they aim to ask Russia to formally annex them. Ukraine doesn’t recognize the Moscow-supported authorities and has vowed to retake at least the territory seized this year.

At least 200 startups focused on deep tech projects will be able to apply for up to 60,000 euros via the EU’s European Innovation Council, the European Commission announced. The EIC will also help with advisory services and matchmaking.

Ukraine had a “vibrant” startup scene with more than 1,600 startups prior to Russia’s invasion of the country, Innovation Commissioner Mariya Gabriel said in a statement. “This new action aims to safeguard this progress, reinforce links to the European innovation ecosystem, and ensure Ukrainian start-ups are well placed to become a critical driver for rebuilding the Ukrainian economy.”

Ukraine needs more weapons to support its defense against Russian forces which are inflicting big losses on the front lines of the war, Ukrainian Defense Minister Oleksiy Resnikov said.

“The situation on the front lines is difficult. Every day we have up to 100 of our soldiers killed and up to 500 wounded,” Reznikov said on Facebook. “The Kremlin continues to press on by sheer mass, stumbles, faces a strong rebuff and suffers huge casualties. But yet still has forces to advance in some parts of the front.”

Russian consumers may soon be feeling the impact of its government’s invasion of Ukraine. Major shipping lines like Maersk, CMA-CGM, and Hapag-Lloyd suspended operations shortly after the onset of Russia’s invasion, leaving customers in short supply.

The average number of container ships in Russian waters has dropped 60% from the November peak, according to Bloomberg calculations. The damage inflicted on Russia by sanctions was on full display as the economy swung into a contraction of 3% in April from a year earlier.

Investors received $500 million for a dollar-denominated bond due June 7, according to people familiar with the transaction, who spoke on condition of anonymity because they’re not authorized to comment publicly. Lukoil — which isn’t sanctioned — is at the center of a shrinking pool of Russian companies that have managed to stay current on their foreign debts.