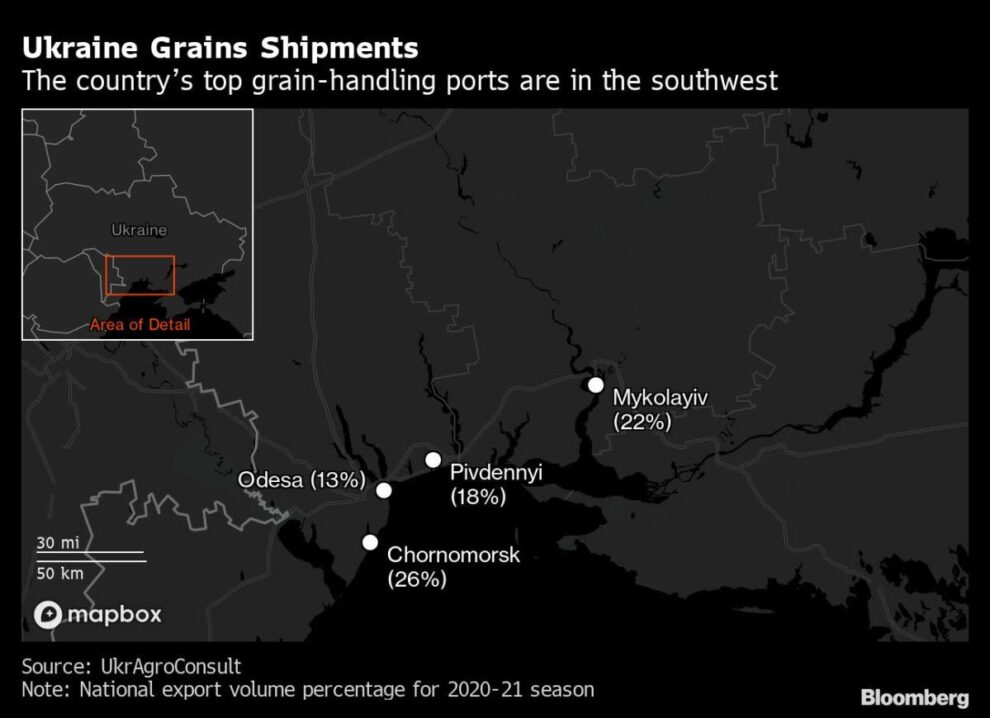 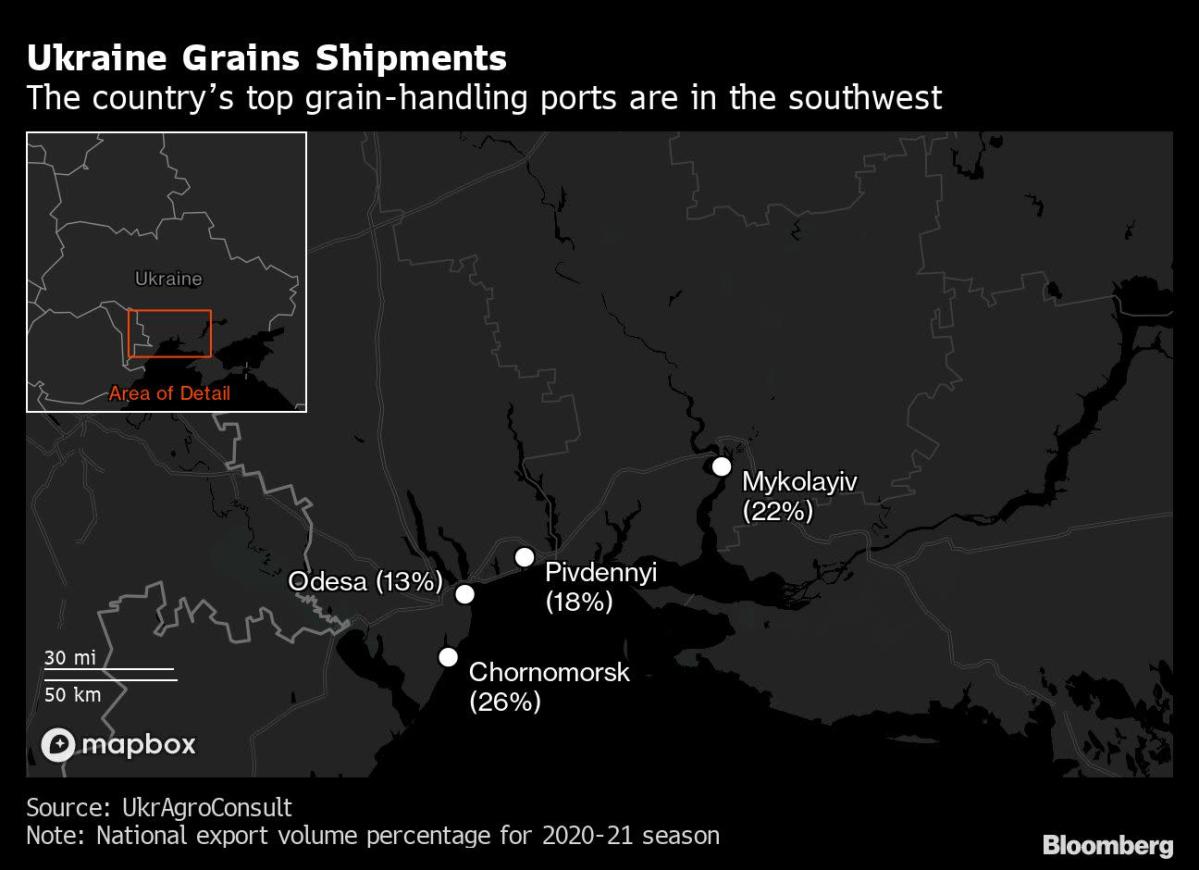 Talks between Russia and Turkey brought no signs of progress on a deal to loosen the Kremlin’s blockade of Ukrainian grain shipments that have contributed to the warnings of a global food-supply crisis. A United Nations expert said removing mines near Ukraine’s ports could take months.

President Volodymyr Zelenskiy said the ongoing battle in the Ukrainian city of Sievierodonetsk is among the most critical in the entire war and could determine the fate of the Donbas region.

Blinken said the US is working to get grain and other goods out of Ukraine and overcome Russia’s blockade so that the commodities can get to markets and to people, which could help lower prices.

About 200 million people worldwide are “severely food insecure,” which is double the number from three years ago, Blinken said at a US Chamber of Commerce event at a meeting of Latin American leaders in Los Angeles.

Zelenskiy said the battle for the Luhansk city of Sievierodonetsk is “the epicenter of the confrontation in Donbas”.

Russian troops have been trying for weeks to seize Sievierodonetsk, a city that had a population of more than 100,000 before the invasion, against Ukrainian counterattacks. About 15,000 people remain in the city, and Russian troops control a significant portion, local authorities say.

“It is a very brutal fight, a very difficult one,” Zelenskiy said in his daily video address. “It is probably one of the most difficult during the whole war. In many respects, the fate of our Donbas is being decided there.’

Removing sea mines near Ukraine’s ports could take months, and hundreds of seafarers remain stranded in the region following Russia’s invasion of the country, according to the United Nations agency responsible for shipping safety.

“Even if the ports wanted to reopen tomorrow it would take some time until ships could enter or depart,” Peter Adams, special adviser on maritime security at the International Maritime Organization, said in an interview. “Completely removing sea mines in the port areas would take several months.”

Erdogan Holds to Hard Line on Sweden and Finland (6:23 p.m.)

Turkish President Recep Tayyip Erdogan signaled no softening in his stance against NATO membership for Sweden and Finland, again accusing the two nations of being hotbeds for terrorism for supporting members of a Kurdish group he brands a threat.

“As long as terrorist leaders are being interviewed on Swedish state TV, we cannot let them enter NATO. Same applies for Finland,” Erdogan said in Ankara.

President Zelenskiy called on businesses, including foreign companies, to invest in Ukraine, including by buying government “war” bonds.

“Even now, in a full-scale war, we are showing absolutely diligent service of our debt,” he told an investment conference via video-link. “That’s why war bonds are a tool for you to both support us in a fight for freedom and earn, earn from us.”

War bonds are one of main instruments Ukraine’s government is using to raise money to cover a budget deficit that the war has caused to balloon from lost revenue and additional costs.

The proximity of war in neighboring Ukraine is making stocks in Budapest and Warsaw into some of the world’s worst performers, with local factors adding to the losses.

The European Union has created a task force to scrutinize the tax affairs of Russians and Belarussians sanctioned by the bloc.

The task force, comprising tax officials from the bloc’s 27 members, is to “unearth possible tax crimes and recover unpaid taxes” related to sanctioned individuals and companies, and to also act as a watchdog to ensure intermediaries comply with prohibitions on offering financial and tax services to sanctioned persons, the European Commission said.

Germany will send an additional 500 troops to Lithuania, increasing its military presence there to 1,500 as part of a push to strengthen NATO’s eastern flank, according to people familiar with the plan.

Baltic nations Lithuania, Estonia and Latvia have made urgent requests for more troops to counter a potential Russian attack after its invasion of Ukraine. The German move sets the stage for a wider decision by North Atlantic Treaty Organization leaders at a summit in Madrid at the end of this month to expand the alliance’s military presence in eastern Europe.

Microsoft is significantly reducing its business in Russia, joining the list of prominent technology firms cutting back or exiting the country.

The company will continue to fulfill existing contractual obligations and keep a suspension of new sales in place, while more than 400 employees will be affected, it said in a statement.

Poland’s largest oil company has seen fuel volume sales surge 10% at its gas stations in recent months after the arrival of Ukrainian refugees caused a spike in demand.

Refiner PKN Orlen SA estimates that there are about 1 million additional Ukrainian cars in the country of 38 million people — the main reason behind a sudden increase in sales.

Ukraine Rejects Any Peace Accord With Frozen Conflict (2:39 p.m.)

Ukraine doesn’t need a peace deal that would freeze the current conflict for years and doesn’t take into account its interests, Foreign Minister Dmytro Kuleba said, adding that Kyiv must be part of any negotiations.

“Nobody will be able to agree on something behind our back,” Kuleba said. He added: “Ukraine doesn’t need a Minsk-3,” referring to the 2014 and 2015 Minsk cease-fire agreements that failed to end hostilities with Russian-backed separatists in Ukraine’s eastern Donbas region.

Kyiv also urged Israel to sign off on the transfer of Spike SR guided anti-tank missile systems from Germany, the Post reported. The US has given permission for Germany to transfer Spike missiles to Ukraine but Israel has so far rejected the request, the ambassador was cited as saying.

Russian billionaires hit by sanctions over Putin’s invasion of Ukraine are flocking to European Union courts in an attempt to extricate themselves from the bloc’s target list of rich individuals. History shows their chances of lasting success are slim.

About 20 appeals by some of Russia’s wealthiest tycoons or their family members have already been filed since the EU started imposing the retaliatory measures in February.

The world economy will pay a “hefty price” for the war in Ukraine, one that includes weaker growth, stronger inflation and potentially long-lasting damage to supply chains, the OECD club of rich nations said.

The organization slashed its outlook for global growth this year to 3% from the 4.5% it predicted in December and doubled its inflation projection to nearly 9% for its 38 member countries, according to forecasts released in Paris.

Talks in Turkey on Grain Shipments Without Progress (11:45 a.m.)

Turkey and Russia showed no signs of progress on a deal to unblock shipments of Ukrainian grain. Zelenskiy, who said Ukraine wasn’t invited to the meeting in Ankara, agreed in a phone conversation with German Chancellor Olaf Scholz that everything must be done to facilitate the export of grain, especially via sea.

Turkish Foreign Minister Mevlut Cavusoglu said Ukraine had shown willingness to guide ships safely through the minefields, but there was no immediate confirmation of that from Kyiv.

Ukraine has said it’s not convinced by the assurances Russia has offered that it won’t take advantage of de-mining to attack the ports, citing Moscow’s public statements before the invasion that it had no plans to attack.

Ukraine is working with partners to establish a humanitarian corridor for grain shipments but it’s too early to talk about a deal, Agriculture Minister Mykola Solskyi told a Turkish newspaper, warning that failure to open up exports from his nation will lead to “catastrophic” global price increases.

While it’s too early to talk about any results regarding these efforts, Solskyi said Ukraine remained in contact with its trade partners and the United Nations on the possibility.

Russian imports in April from Belarus, a Kremlin ally that was used to help stage the invasion, for the first time leapfrogged Germany, an economy more than 60 times bigger, according to a Bloomberg analysis of the latest data.

Sales to Russia from trading partners that together accounted for nearly half its imports in 2021 were down about 40% in April from a year earlier, Bloomberg calculations show. Even those, like China, which haven’t joined the US and its allies in imposing sanctions, are cutting shipments of merchandise.

Ukrainian troops held back the Russian assault in Sievierodonetsk, while fighting in the city and in the villages to the south of it continues, the General Staff of the Ukrainian Armed Forces said.

The city and its nearby area have seen heavy fighting in recent weeks as they are holding out against Russian forces. Russia said its military has occupied 97% of Luhansk, one of two regions comprising the Donbas, which is the focus of Putin’s war.