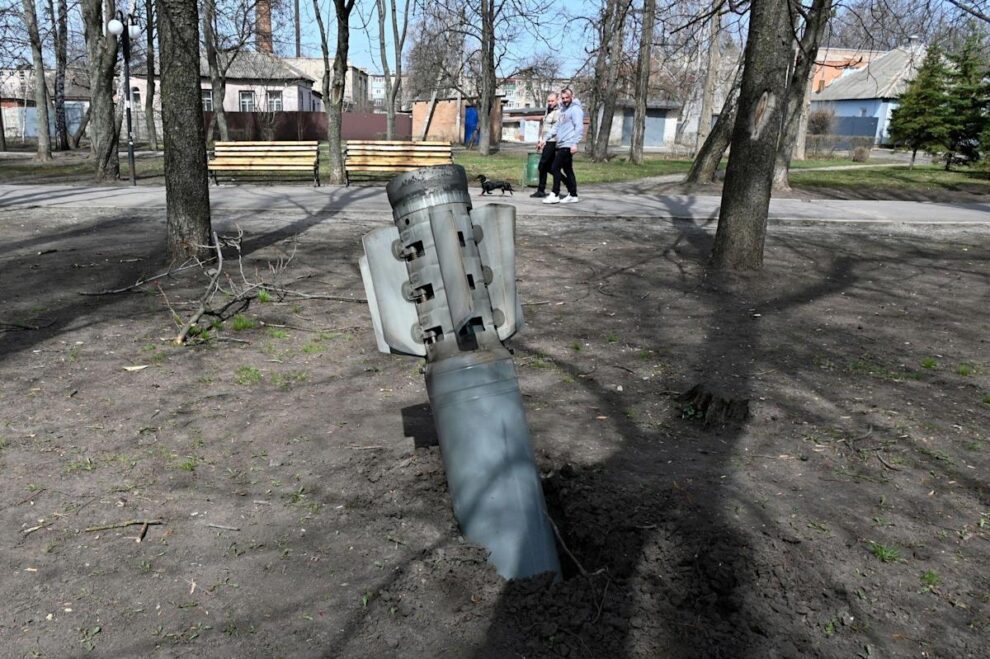 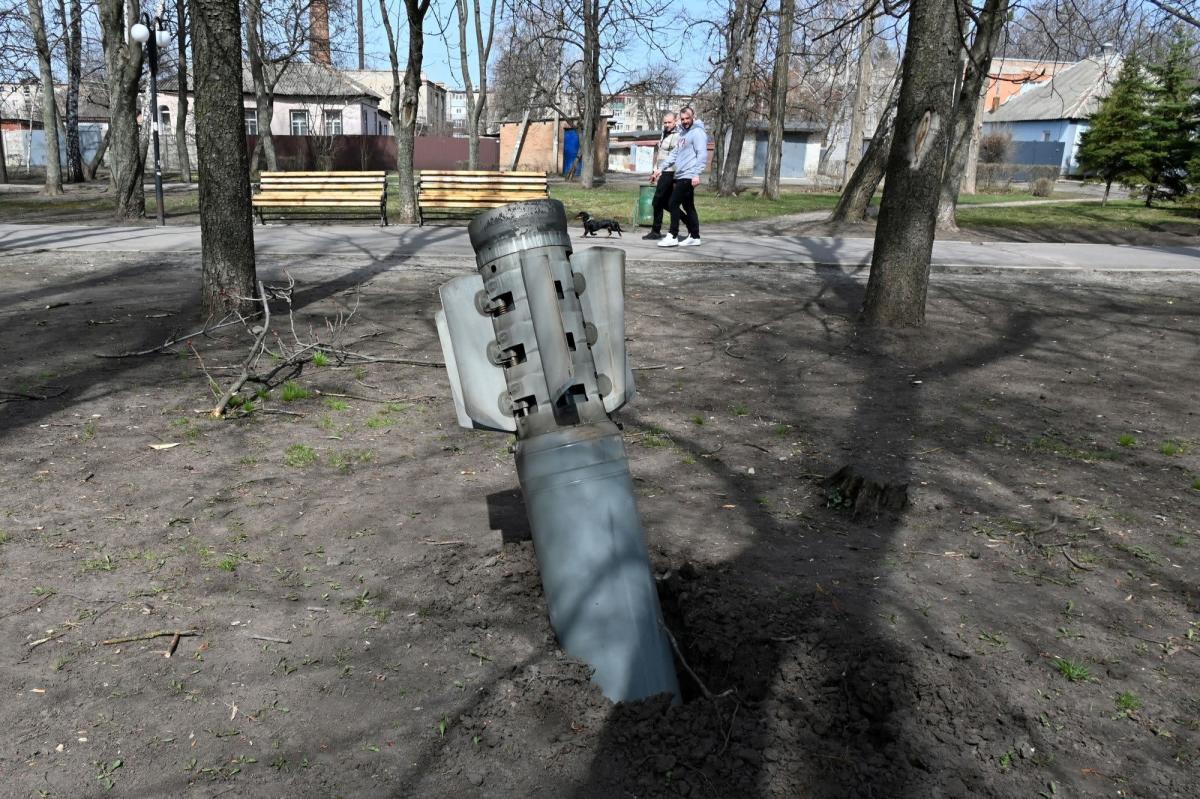 Ukraine expects Russia to widen its offensive in the east this week, President Volodymyr Zelenskiy said, while a new commander for the Russian troops on the ground is raising alarm among U.S. officials.

Putin’s invasion will likely cause Ukraine’s economy to shrink by almost half this year, the World Bank said, while it expects Russia’s to contract by about 11%. The Kremlin said it’s boosting a national economic stability fund, using oil and gas revenue that continues to flow.

Wheat extended a surge to a two-week high, propelled by deepening fears about dwindling global stockpiles as the war in Ukraine continues to cloud the outlook for Black Sea exports.

Russia’s war in Ukraine is upending trade flows out of the critical Black Sea breadbasket region, fueling panic about shortages of key staples such as wheat, corn and cooking oils. Global food prices, which were already surging before the conflict, rose at the fastest pace ever in March, piling more inflationary pain on consumers and worsening a global hunger crisis.

Prime Minister Lee Hsien Loong warned the U.S. against isolating China over the war in Ukraine by framing it as a battle between democracies and autocracies, which would complicate an already fraught relationship between the two powers.

“You have to be very careful not to define the problem with Ukraine in such a way that automatically, China is already on the wrong side,” Lee said in comments published by his office Sunday.

Russia won’t default on its debt obligations and the economy is expected to recover to its 2021 level in a year, Izvestia reported, citing an interview with Deputy Economy Minister Ilya Torosov. Russia has enough resources to serve its debt, Torosov told the newspaper.

“We do not plan to go to the local market or foreign markets this year,” Finance Minister Anton Siluanov told Izvestia. “It makes no sense because the borrowing cost would be cosmic.”

Zelenskiy said he expects Russia to “turn to even more large-scale actions in the east of our country” this week, including intensified air strikes. The week “will be no less tense and even more weighty with responsibility,” he said in a video message.

The Ukrainian president has been warning for days of a new Russian offensive. “We don’t know how much Russian weaponry there will be, but we understand there will be many times more than there is now,” he said in a pre-recorded CBS News interview to air Sunday.

Russia’s sanctions-hit economy is projected to shrink by 11.2% this year, the World Bank said in an outlook published Sunday. Ukraine’s economy will contract by an estimated 45.1%, or almost half, with the outcome depending on the duration and intensity of the war, according to the Washington-based development bank.

Renewed missile attacks by Russian forces have demolished the airport at Dnipro in central Ukraine, according to the regional governor. Dnipro is the fourth-largest city in the country.

The airport came under shelling in the morning and then again several hours later, with the subsequent attack injuring rescue workers on the scene, Valentyn Reznichenko said on his Telegram channel.

Austria’s Chancellor Karl Nehammer said on Twitter he’ll meet Vladimir Putin in Moscow on Monday in an attempt to build dialog with the Russian president.

The move is unusual for Nehammer, a novice in diplomatic circles who took office in December. He’ll look to build on militarily-neutral Austria’s perceived role as a bridge between Europe’s east and west.

Russia’s new military commander in Ukraine will probably mean “a continuation of what we have already seen on the ground,” said White House press secretary Jen Psaki.

Psaki was asked on Fox News about General Alexander Dvornikov, leader of the Russia’s Southern Military District, who’s been tapped to run the overall war effort in Ukraine. He notably oversaw Russian forces in Syria in 2015 and 2016.

“This particular general has a resume that includes a brutality against civilians in other theaters, in Syria. And we can expect more of the same,” U.S. National Security Adviser Jake Sullivan said on CNN. “This general will just be another author of crimes and brutality against Ukrainian civilians.”

Efforts to supply arms to Ukraine as Russian forces regroup in the east include “looking at systems that would require some training” for Ukrainian troops outside the country, National Security Adviser Jake Sullivan told CBS on Sunday.

Sullivan said he and Mark Milley, chairman of the Joint Chiefs of Staff, “worked through a game plan” for delivering more weapons from the U.S. or its allies during a call last week with President Volodymyr Zelenskiy. “Some of that’s been delivered, some of it’s on the way and some of it we’re still working to source,” Sullivan said.

Vladimir Putin and Belarus leader Alexander Lukashenko will meet Tuesday at the Vostochny Cosmodrome in eastern Russia, Interfax reported. They’re expected to discuss Lukashenko’s hopes of being part of negotiations with Ukraine.

It’s a rare foray out of the Moscow region for Putin since Russia’s invasion of Ukraine on Feb. 24.

Volodymyr Zelenskiy spoke by phone with German Chancellor Olaf Scholz on Sunday, with the talks said to focus on prosecution of Russian war crimes and financial support for Kyiv.

A readout from the German government and a Twitter post from Zelenskiy make no reference to any discussion about Germany’s energy purchases from Russia.

Kyiv has accused Germany of financing Moscow’s war machine with its long-standing reluctance to stop buying Russian natural gas and coal. Berlin is looking to wean itself off Russian gas over time.

Bloomberg News reported last month that VTB Bank Europe has been put up for sale, with German regulators backing the plan as they seek to avoid a messy unraveling.

The missiles, part of the latest U.K. military aid, will be crucial as Russia presses its assault on southern coastal cities, including Odesa, said Ihor Zhovkva, an adviser to Ukraine’s president.

“Russia is now trying to capture some major cities from the sea, such as Odesa,” Zhovkva said Sunday on the BBC. “They are now firing and shelling the infrastructure over there, from the sea.” Odesa, a key naval base on the Black Sea, has come under fire from missile strikes launched from the Crimean peninsula, Ukraine’s military has said.

EU foreign policy chief Josep Borrell held an extraordinary meeting of the bloc’s military committee Sunday to discuss expected Russian attacks in the east and south of Ukraine, as well as Kyiv’s request for additional weapons, according to an EU official who declined to be named.

EU foreign ministers are expected to discuss further sanctions on Russia on Monday, including on the oil sector. The EU plans to approve an additional 500 million euros in arms in the coming days to support Ukraine, in addition to 1 billion euros already allocated.