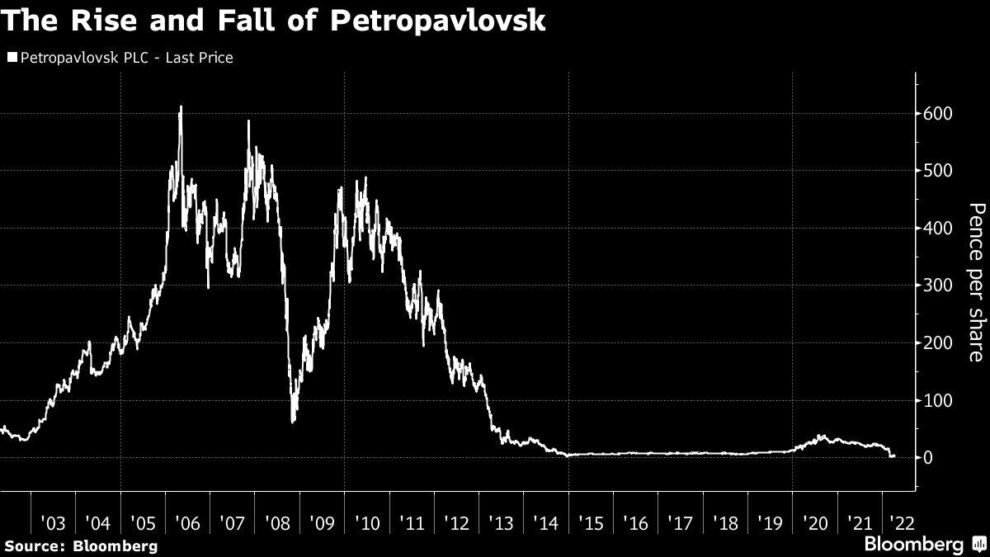 (Bloomberg) -- Russia is looking to roll back more of the capital controls that were imposed to stabilize markets after its invasion, now into its 50th day. Meanwhile inflation in Ukraine may exceed 20% this year, the highest since 2015, as the war disrupts production and supply chains, the central bank said. Most Read from BloombergElon Musk Makes $43 Billion Unsolicited Bid to Take Twitter PrivateUkraine Update: U.S., EU to Send More Arms; Warship DamagedCalifornia Lawyer Quits Over Allegation Read More... 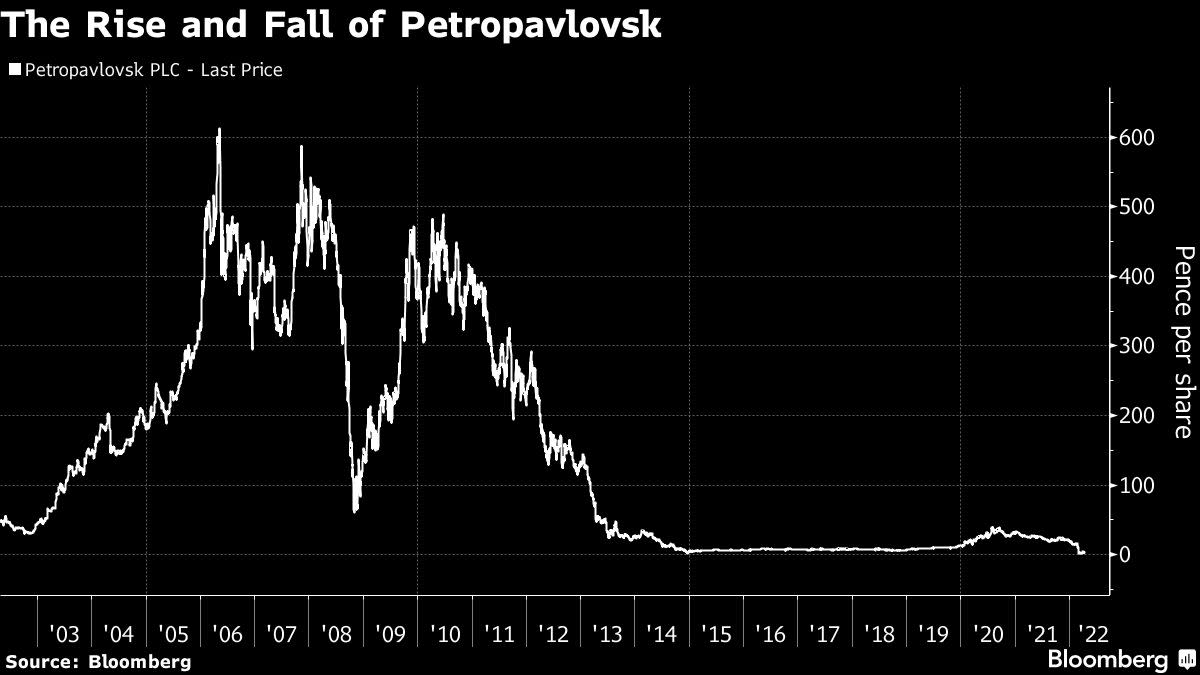 (Bloomberg) — Russia is looking to roll back more of the capital controls that were imposed to stabilize markets after its invasion, now into its 50th day. Meanwhile inflation in Ukraine may exceed 20% this year, the highest since 2015, as the war disrupts production and supply chains, the central bank said.

The Russian missile cruiser Moskva will be towed back to port after a fire, Moscow said. Ukraine’s armed forces said the flagship warship of Russia’s Black Sea fleet was hit by anti-ship missiles.

The European Union told member states that complying with President Vladimir Putin’s demand for Russian gas imports to be paid for in rubles would violate sanctions. EU leaders plan to discuss common gas purchases at a summit next month as they seek to avoid competing against each other for alternative energy supplies.

The goal will be to avoid competing against each other for alternative energy supplies in the effort to phase out purchases from Russia.

The bloc’s two-day summit starting May 30 is expected to cover a solidarity mechanism to support member states facing gas shortages, energy interconnections in the bloc, the security of energy supplies and possible changes to the EU’s electricity market, according to people familiar with the discussions.

Russia needs to shift its energy exports to markets beyond Europe, Putin said in a televised statement. He added Europe has no immediate alternative to Russian gas, and that attempts to squeeze Russian energy out of global supplies will destabilize markets and push up prices.

Putin said some “unfriendly” countries are already falling behind in payments to Russia, without going into specifics.

President Joe Biden’s National Security Advisor Jake Sullivan told the Economic Club of Washington that the U.S. is focused on stopping evasion of sanctions imposed so far, and will have an announcement in the next day or two on that. He offered no further details.

Ukrainian inflation may exceed 20% this year, the highest since 2015, as Russia’s invasion disrupts production and supply chains, the central bank said.

The bank also expects the country’s economy to shrink by at least third due to decline of consumption as millions of people flee the country, while unemployment is raising amid the Russia’s war on Ukraine. Still, economic activity started to pick up in April and share of companies that have fully ceased operations fell to 23% this month from more than 30% in March.

The National Bank of Ukraine reiterated it will return to inflation targeting with floating hryvnia rate and will stop financing budget after economy starts functioning normally.

Russian Warship Will be Towed to Port, Interfax Reports (1:19 p.m.)

The Russian Moskva cruiser will be towed to port for examination, the Russian Defense Ministry said according to an Interfax report, which added that the ship’s main missile equipment wasn’t damaged.

The Moskva was hit by “Neptune” anti-ship cruise missiles, resulting in significant damage and a fire, according to a statement from Ukraine’s armed forces posted on Facebook: “A powerful explosion of the ammunition toppled the cruiser over and it began to sink.”

The condition of the flagship of Russia’s Black Sea fleet, which typically has a crew approaching 500, remains unclear. Russia says there’s been localized fires aboard, causing ammunition to detonate, with the cause is under review.

Petropavlovsk Plc, once one of the biggest London-listed gold miners, said it’s looking at selling all its assets as sanctions against Russia mean it can’t sell the bullion it produces in the country or pay its debts.

Shares plummeted as much as 20% in London on the news, and have fallen more than 90% since the start of the Russian invasion of Ukraine.

Netherlands Tells Companies Not to Pay for Gas in Rubles (11:26 a.m.)

The Netherlands said it won’t allow Dutch companies to accept a demand from Moscow to pay for gas in rubles. Russian gas flows to the Netherlands are low by regional standards. But the move may add to pressure on other European countries to fall in line.

Zelenskiy also discussed the challenges Ukraine faces trying to export its grain, with von der Leyen saying the bloc would use its expedited border crossing procedures to help, the people said.

Russia’s stock benchmark MOEX Index fell for a fifth day as Russia reiterated a warning if Norway and Sweden decide to join NATO. Stocks are down about 3.8% for the week.

Stocks and government bonds in Europe were steady as investors await the central bank’s meeting later on Thursday for cues on the path of monetary policy. U.S. equity futures are narrowly mixed so far.

The commodity-fueled jump in costs exacerbated by Russia’s war in Ukraine continues to ripple across the global economy and temper market sentiment.

Russia threatened to deploy nuclear weapons in and around the Baltic Sea region if Finland and Sweden join the North Atlantic Treaty Organization as tensions fueled by Vladimir Putin’s invasion of Ukraine spread.

“In this case, there can be no talk of non-nuclear status for the Baltic,” Dmitry Medvedev, deputy chief of the Security Council and former president, said in a Telegram post Thursday, suggesting Russia may deploy Iskander missiles, hypersonic weapons and nuclear-armed ships in the region.

Russia has repeatedly warned both nations of consequences if they decide to join the alliance.

Two submarines from Russia’s Pacific Fleet conducted successful launches of Kalibr cruise missiles from the Sea of Japan at sea targets, according to Tass. Russian subs previously tested the missiles in December.

European natural gas prices declined on expectations of higher Russian flows via Ukraine and increased supplies from Norway. Benchmark Dutch front-month gas futures fell as much as 3.2% and were down 2.7% by 8:58 a.m. in Amsterdam.

Oil also fell after a two-day rally that pushed prices back above $100 a barrel. Investors digested a raft of factors from the continuing fallout from Russia’s invasion of Ukraine to China’s virus lockdowns. Brent crude for June settlement dropped 1.2%.

Clio, a $65-million superyacht tied to Oleg Deripaska, the Russian aluminum billionaire whose connections to Vladimir Putin have put him on sanctions lists, is on the move again after being anchored off the Maldives.

Authorities in the U.S. and allies in the U.K., Italy, France and Germany are trying to locate the luxury boats and other properties of Russian tycoons. Nearly a dozen yachts have already been seized.

It’s unclear what Putin was referring to. Under the new payment procedure demanded by the Kremlin, European buyers would need to have two accounts with Gazprombank — one in euros and one in rubles — and the Russian lender would be responsible for making the conversion.

Russian authorities are considering a step-by-step approach to rolling back the harsh capital controls imposed to stabilize markets after the invasion of Ukraine.

Discussions this week focused on options that included extending the deadline for exporters to carry out mandatory conversions of their overseas earnings into rubles and lowering below 80% the share of foreign proceeds that companies are obliged to sell in the market, according to people informed on the matter.

The wartime controls have created a mismatch between the supply and demand for foreign currency, feeding a rally in the ruble that helped it regain all ground lost after the war began. Some Russian metal and mining companies are now struggling to sell dollars in such big volumes, according to people familiar with the matter.

A majority of German voters favors supplying Ukraine with heavy weapons like tanks and fighter jets, according to a poll published Thursday.

Germany has already sent Ukraine a considerable amount of military equipment, including anti-tank and anti-aircraft systems. Chancellor Olaf Scholz is under pressure to do more; even some members of his ruling coalition have criticized him for what they say is excessive caution. The Infratest Dimap poll of 1,226 voters for public broadcaster ARD showed that 55% support sending heavy weapons and 37% are against.