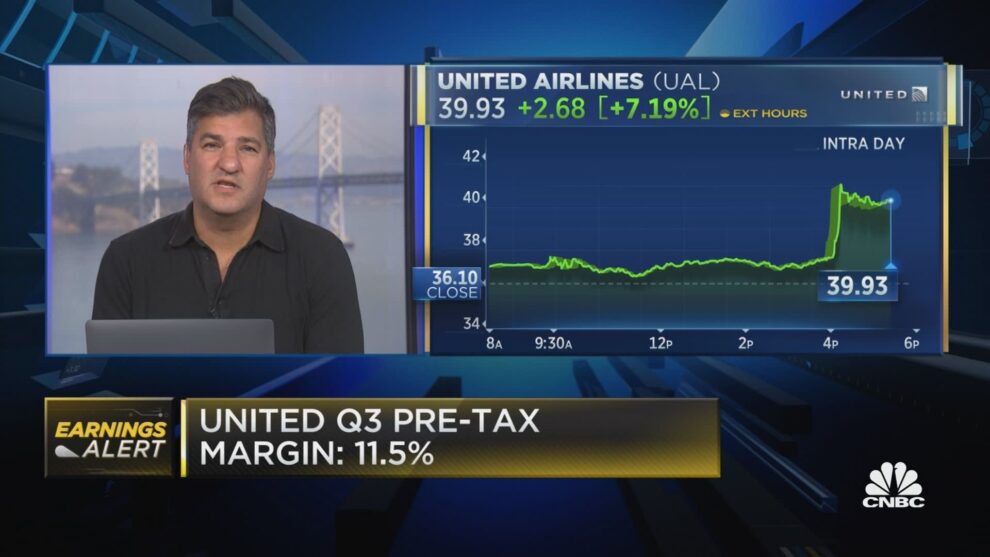 United said it expects another profit for the fourth quarter. Read more...

United Airlines forecast another profit for the end of the year and said consumer appetite for travel is showing no signs of slowing down despite high airfares and concerns about the economy.

Shares were up more than 6% in morning trading on Wednesday.

“Hybrid work allows every weekend to be a holiday weekend,” Kirby said in an interview Wednesday with CNBC’s “Squawk Box.” He said remote work is allowing travelers to fly on days they wouldn’t be able to before the pandemic, when they were in the office more often.

“It wasn’t money that constrained people from travel. It was time,” Kirby said. “They’re untethered from the desk.”

The Chicago-based carrier posted a third-quarter profit of $942 million, down 8% from three years ago, and $12.88 billion in revenue, which was ahead of analysts’ estimates and up 13% from 2019.

The strong summer travel season and sunny outlook for the rest of the year indicate consumers are willing to continue to spend on trips, a turnaround from early in the pandemic when Covid-19 restrictions devastated demand. Delta Air Lines last week said it brought in record revenue for the third quarter and forecast another profit for the fourth quarter.

The upbeat outlooks from airline executives contrast with other sectors that have struggled this year, including parts of the retail industry and some streaming platforms that were beneficiaries of lockdowns early in the pandemic.

Here’s how United performed in the third quarter compared with what Wall Street expected, based on average estimates compiled by Refinitiv:

U.S. airline executives have recently noted strong demand to Europe well past the summer peak and into the fall, and are keeping more capacity in those markets in response, CNBC reported last month.

Airlines remain constrained in how many flights they can offer as aircraft deliveries run late because of supply chain problems and other issues, and carriers scramble to hire and train new staff, particularly pilots.

Limited supply of flights is keeping fares up. United said its third-quarter revenue per available seat mile was up more than 25% from three years earlier. For the current quarter, it expects that metric to be up by as much as that amount compared with 2019.

Meanwhile, the carrier said its fourth-quarter capacity will likely be down about 10% compared with 2019, similar to its capacity in the third quarter.

United executives will hold a call with analysts on Wednesday at 10:30 a.m. EDT.