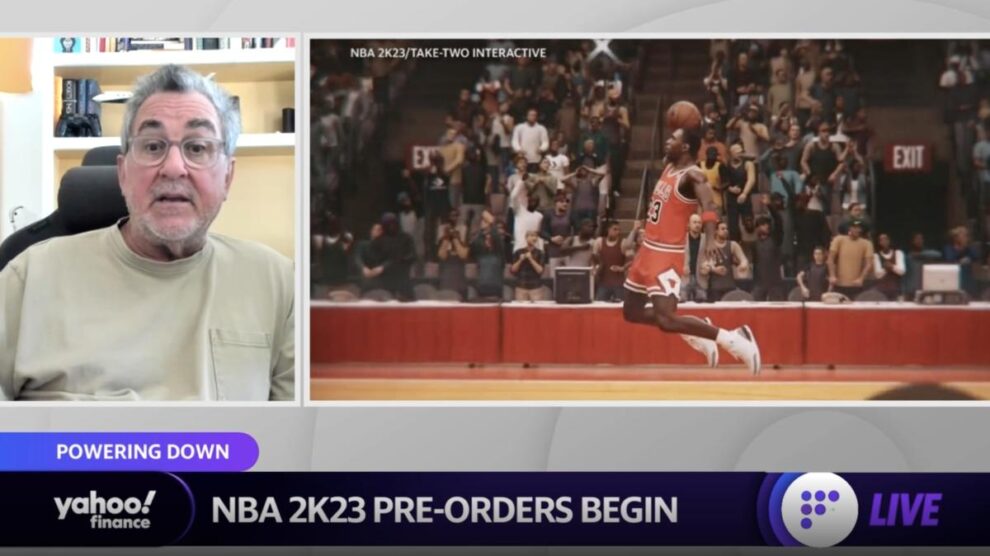 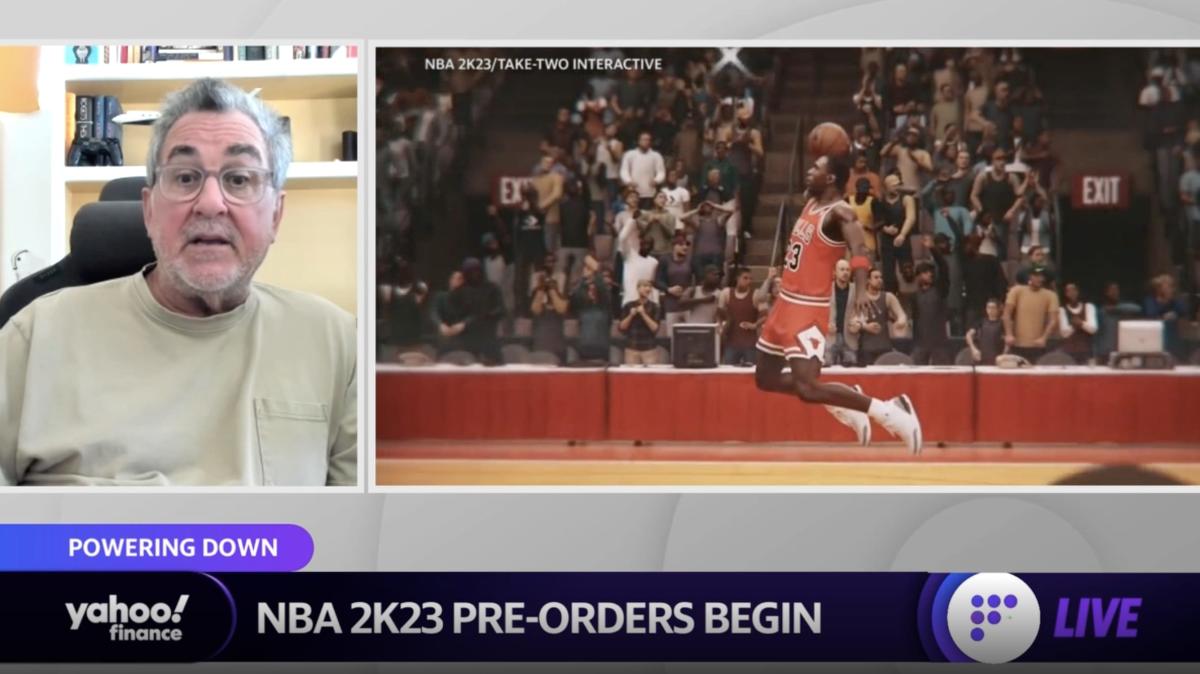 RACHELLE AKUFFO: Welcome back, everyone. GameStop shares spiking more than 10% today on news of a four-for-one stock split. The stock continuing to rally. Here to discuss that and more in the world of gaming is Michael Pachter, Wedbush managing director. So, good to– always good to have you on. I want to first start with what we’re seeing with GameStop. Now Wedbush has an underperform rating for it, but it’s popping today with that stock split announcement, one of the top trending tickers on Yahoo Finance. Where do you see GameStop, though, actually going from here?

MICHAEL PACHTER: Oh, probably closer to 0 than to 140, but I’d say the stock’s worth about 40, 50 bucks a share, just based on their cash position, probably a little less if they continue to tilt at windmills and chase the NFT marketplace idea. It’s funny that they entered into crypto and blockchain at a time when crypto and blockchain stocks just crashed. And yet, GameStop has not because the unsophisticated investors who are piling in just think GameStop is going to dominate.

So that’s not going to work. They’re not going to thrive in their core business. Console gaming is on the way out. It’s not going to zero, but gonna get cut in half in the next five or six years. And they really don’t have much left. They have an incompetent management team, competent to run internet retail, but not competent to run a declining business. And I think that the meme investors are just being kind of lulled into a false sense of confidence by misdirection, like splitting the stock. It’s just not going to change anything. It doesn’t change the value. You can buy a fractional share on Robinhood.

DAVE BRIGGS: So you’re not jumping into that pool. You say console gaming has been cut in half the next four or five years. Presumably, you’re talking about cloud and streaming? Is that the biggest threat?

MICHAEL PACHTER: Yes. Yeah, it’s not a threat. I mean, for the publishers, it’s actually quite an opportunity. It’s just that as Microsoft Game Pass kind of penetrates, and then you’ve got competing offerings from Amazon with Luna and Google with Stadia– and I don’t think either of those is going to work, but they’re all trying– you’re just going to have alternate ways to deliver games. You’re seeing the publishers kind of migrate away from selling $60 games and toward ongoing live services.

So the guys who made “Titanfall,” which is a $60 game came up with “Apex Legends.” And they went from selling maybe $400 or $500 million worth of product every three years to a billion a year. That’s a better business. And that’s really what, I think, is going to happen, is that gaming habits are going to shift. The $60 game is going to be like the movie in a movie theater. It’s going to continue to be a business. It’s just going to shrink.

RACHELLE AKUFFO: And we did see that Ampere Analysis predicts a 1.2% market decline for the year for the gaming industry, a bigger hit specifically for mobile gaming. They expect a 1.3% hit, even though they do expect it to rebound. And that’s due to some of the changes that we’ve seen with these revamped privacy settings. What do you think that’s going to play in terms of the role that some of these changing privacy settings are going to play in the broader gaming industry?

MICHAEL PACHTER: I think that most of the firms that have forecasts pull the numbers out of their butts. And so I would throw that survey you just cited into that pot. They have no idea what’s going on with mobile gaming, and it’s impossible to forecast. It is growing at about a 7% to 9% annual clip. And we might have a decline this year, but it’s not because of privacy settings or anything Apple’s doing. That’s BS.

That will impact brand advertisers from delivering ads to– on mobile devices. It’s not going to change the amount of consumption of in-app purchases. The recession will change– will affect the consumption of in-app purchases. So the 1.3% decline might end up being right, but not for the reasons they cited. They have no clue what they’re talking about. You should be embarrassed to be citing a service that doesn’t know what they’re talking about.

DAVE BRIGGS: Wow, tell us how you really feel, sir. I want to ask you about the biggest acquisition we’ve seen in years here. And it’s Microsoft’s $68.7 billion purchase of Activision Blizzard. The UK’s Competition and Markets Authority has announced a formal investigation into that deal. How big a threat is that? And where does that deal stand here?

MICHAEL PACHTER: The UK has a 0.0% probability of stopping the deal, so I would say that’s not a big threat. They’ll look at it. I mean, everybody should look at it. And UK rules are very similar to the US rules. You can’t combine companies and then use the market size to change price or to hurt the consumer. So all the different government agencies that are looking at this, the FTC in the United States, are making sure they protect the consumer. And the FTC will lead, and they’ll extract concessions from Microsoft.

And the truth is, by buying Activision, the only thing Microsoft could do to hurt consumers is raise the price of games. They could say “Call of Duty” is now 100 bucks, and that would be bad. They could say “Call of Duty” will only be on the Xbox, and that will be bad for Playstation owners. So those are the types of concessions that I think they will give– they’ll give up. FTC will ask them to commit that they won’t charge more than 60 bucks for a game for the next five years, and that they will make sure that “Call of Duty” and other Activision titles are made available for the PlayStation. And Microsoft will do both those things.

So, given that the FTC can raise the red flag that they might impact competition, if they do these pie in the sky things, and Microsoft will then respond to say, we won’t do it, then where is the anti-competitive result from the combination? There isn’t one. So this deal is going to go through. The question is just when.

And the real question is how tough is Microsoft going to be. We saw Amazon tell the FTC, you have 365 days to approve our MGM acquisition, or we’re going to close it and hell with you. Take us to court. And the FTC blinked, and they didn’t take them to court. I expect that around December 1, Microsoft will say, you have 45 more days, January 15, and we’re going to close the deal. That’s what you should write down on your calendar. That’s going to happen.

The FTC is going to blink. They’re not going to sue because they’re not going to win. And the UK Competition Commission is just making sure they’re sending a signal to the citizens of the UK that they’re watching out for their best interests, although the UK clearly has bigger problems than worrying about Activision and Microsoft.

RACHELLE AKUFFO: And I want to ask you specifically about “NBA 2K22” that’s expected to drive Take-Two’s Q4 revenue to about $930 million, and obviously, NBA 2K23. Those pre-orders start today. How much of a driver do you think that’s going to be? Are they overestimating it? Or is there as much as going for this as they think there is?

MICHAEL PACHTER: It’s a big game, obviously. But I think that’s like asking me about a television show in NBC’s lineup. I mean, NBA is about a $500 million a year business for Take-Two. And their prior revenues were about $3 and 1/2 billion. So it’s pretty meaningful. They just acquired Zynga, so their revenues are more like $6 and 1/2 billion. So it’s less than 10% of revenue. And I don’t think that the range of outcomes is going to vary by more than about 50 million bucks, so kind of a rounding error.

RACHELLE AKUFFO: All right, always good to have you on. Never pulling any punches, Michael Pachter there, Wedbush managing director.