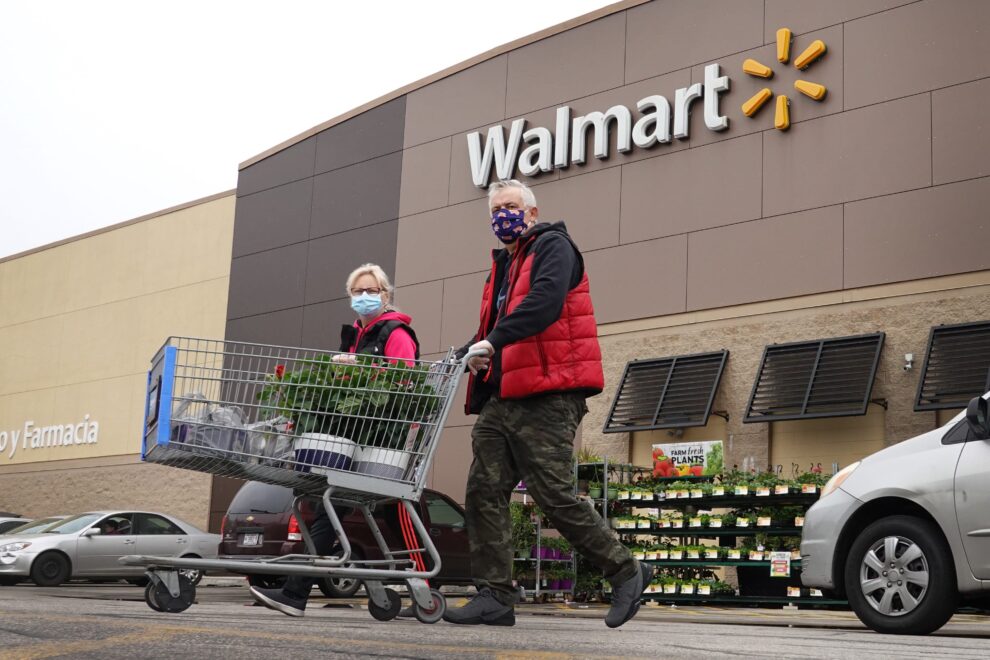 Walmart’s U.S. e-commerce sales soared by 79% in the third quarter, as customers continued to shop online during the coronavirus pandemic. Read more...

Customers shop at a Walmart store on May 19, 2020 in Chicago, Illinois.

The discounter said customers are embracing the new ways of shopping they adopted during the global health crisis, and as the holiday shopping season begins. Instead of browsing store aisles, more of them are shipping purchases to their homes, getting groceries dropped off at their doors or picking up online purchases by the curbside.

Walmart did not provide an outlook, but the company’s CEO Doug McMillon said the popularity of the online shopping services will not fade away.

“We think these new customer behaviors will largely persist and we’re well positioned to serve customers with the value and experience they’re looking for,” McMillon said in a news release.

Shares of Walmart were up about 1% in premarket trading.

Here’s what the company reported for the fiscal third quarter ended Oct. 31:

Walmart’s same-store sales in the U.S. grew by 6.4%, higher than the increase of 3.9% expected by StreetAccount survey.

Walmart has been one of the beneficiaries of stay-at-home trends during the pandemic — a trend that continued in the most recent quarter, even without a boost from government stimulus dollars. Since the spring, Americans have turned to its stores and website for groceries, cleaning supplies and items to pass the time, from puzzles to bicycles.

Walmart CEO Brett Biggs said the shift in purchasing patterns at the start of the pandemic amounted to “three to five years of acceleration in e-commerce, really in a period of weeks and months.”

But, he added, “people are still going to want to stop and shop at stores longer term so we like the combination of those assets.”

In the coming months, Walmart will face new challenges. Coronavirus cases and hospitalizations are rising across the country during the holiday shopping season. Starting Saturday, Walmart said it would resume counting and restricting the number of customers in the store to make sure they don’t exceed capacity limits. Some grocers, including Kroger, Wegmans and Publix, have reinstated purchasing limits on toilet paper, disinfecting spray and hand sanitizer.

Walmart’s stores will be closed on Thanksgiving, a day that’s been the kickoff to the shopping season in previous years. Like other retailers, the discounter began holiday sales early because of the pandemic and has spread out its deals. It split up Black Friday into multiple store and online events instead of having a day of doorbusters.

“It just gives people more of an opportunity to shop throughout the season,” Biggs said. “It’s not so focused on one day.”

He said that helps spread out orders for Walmart, which must pick, pack and ship many of those purchases.

“Think about how you supply stores. It certainly takes pressure off of a system that’s typically geared toward a few days or a Black Friday weekend. All of that I think is a positive for us and for customers.”

AP Explains: US sanctions on Huawei bite, but who gets hurt?

Upgrade: The $51,000 mistake thousands of retirement savers have already made