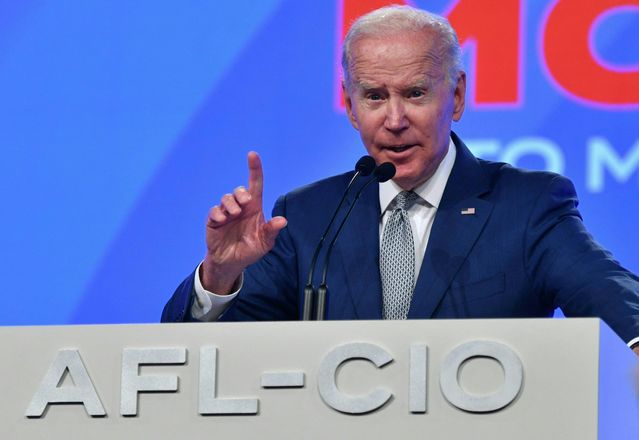 “We are closely watching. We know that families are concerned about inflation and the stock market,” Jean-Pierre said during a press gaggle, when asked about recession fears and the S&P 500’s SPX, -0.38% fall on Monday into a bear market — popularly defined as a drop of at least 20% from a recent peak.

“What we’re facing are global challenges: Putin’s price hike, inflation, coming out of a once-in-a-generation global pandemic,” she added, referring to increases in energy CL00, -1.44% and food prices that are in part due to Russian President Vladimir Putin’s invasion of Ukraine.

“The American people are well-positioned, we believe, to face these challenges because of what the president has done this past year and a half on dealing with the economy.”

President Joe Biden’s spokeswoman also said: “So all of these things matter, but yes, we are watching it closely, and we understand how this feels for the American people.”

Related: The Russian invasion of Ukraine accounts for more than a third of U.S. inflation, forecaster says

And see: Biden adviser argues U.S. still would face ‘record high inflation’ if there hadn’t been a $2 trillion spending package — and there would be ‘much higher unemployment’

Jean-Pierre made similar remarks on Monday, when she was asked by a reporter about the fact that all of the stock market’s gains from Biden’s time in office have been wiped out.

Both the S&P 500 and Dow Jones Industrial Average DJIA, -0.50% finished Monday’s session below their closes on Jan. 20, 2021 — the date of Biden’s inauguration. They hadn’t closed under their Inauguration Day levels since March 2021.

Republicans have blasted Biden and his fellow Democrats over high inflation and the stock market’s selloff, with the Republican National Committee noting how the main gauges finished on Monday in the tweet below.

The GOP is widely expected to regain control of the U.S. House of Representatives in November’s midterm elections thanks in part to Americans’ frustration over inflation, with betting market PredictIt giving an 88% chance for that outcome. The GOP is getting good odds for taking back the 50-50 Senate, too, as PredictIt puts their chances at 77%.

Read more: Biden talks up his efforts to tame high prices, as analysts see ‘rough’ midterm elections for him unless inflation abates

Biden on Tuesday reiterated his view that inflation is a global challenge, and the U.S. can fight it better than other nations thanks to his economic policies.

“My plan for the economy made extraordinary progress to put America in a position to tackle a world-wide problem that’s worse everywhere but here — inflation,” he said, as he spoke in Philadelphia at a convention for the AFL-CIO, the biggest U.S. federation for labor unions.

U.S. stocks traded mostly lower Tuesday afternoon, as financial markets continued to reel from a report on Friday that showed a surprise acceleration in inflation just ahead of a Federal Reserve interest-rate decision. Stocks have tumbled this year, with the S&P 500 down about 22%, as investors fret about high prices for consumers, the Fed’s rate hikes and the potential for a recession.