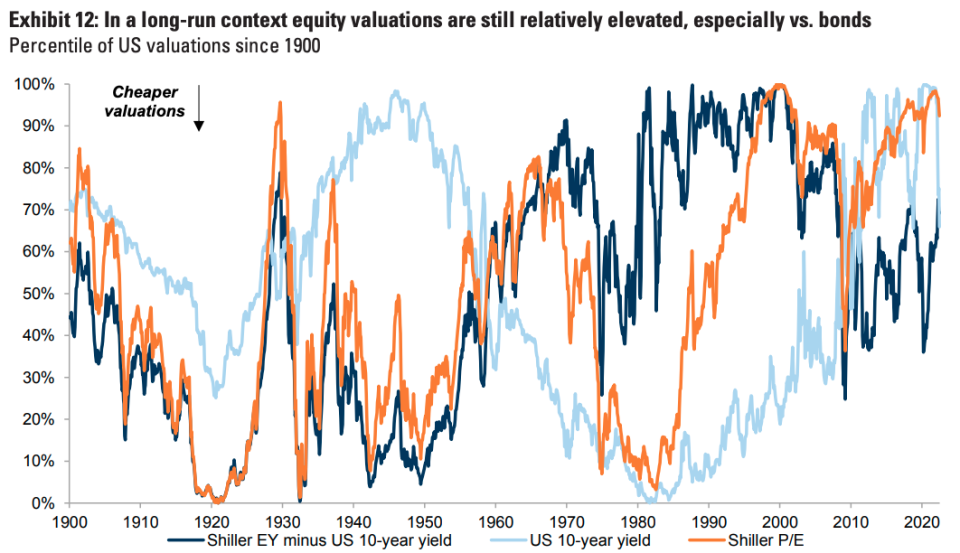 Goldman Sachs is staying risk-off on stocks as the second half of the year kicks off. Here's why. Read More...

The market’s challenges may persist, prompting Goldman Sachs to stay cautious on recommending stocks even though they are at far cheaper levels than six months ago.

“Until the growth/inflation mix improves volatility is likely to linger as investors are shifting between inflation frustration and recession obsession,” Goldman Sachs strategist Christian Mueller-Glissmann wrote in a new note to clients, adding that Goldman is positioned “defensively” for the next three months until macroeconomic conditions show signs of improving.

“Near-term equity drawdown risk remains elevated as equities are pricing only a mild recession: much of the valuation de-rating year to date has been due to higher rates/inflation,” Mueller-Glissmann added. “Unless bond yields start to decline and buffer rising [Equity Risk Premiums] due to recession fears, equity valuations could decline further. In addition, earnings revisions are likely to turn negative in second half.”

Goldman’s take on the market landscape comes on the heels of a brutal first half for investors (provided they weren’t short stocks…) as interest rates rose and inflation stayed high.

Almost no stocks were spared from the intense first half selling pressure.

Apple and Tesla are down 23% and 36%, respectively year to date. Netflix has fallen off a cliff with a 71% crash. A rare first-half winner: dividend payer IBM with a 5% gain.