Woven is joining Slack (WORK) to ramp up its growth and help the latter compete against Google and Microsoft. The popular calendar app is joining the workplace communication software company after two years of solid growth. Woven has grown to become one of the most powerful calendar apps in the market. It boasts unique technology that helps preserve what Google (GOOGL) and Microsoft (MSFT) are best at while filling the gaps that remain unsolved. According to CEO Tim Campos and Chief Technology Officer Burc Arpat, Woven has succeeded in helping people spend time on what matters the most. Over the past two years, Woven has scheduled over 2.2 million events and helped users save over 10 million minutes. It has also helped over 40 million people make sense of over 250 million events. A merger with Slack could help Woven strengthen its position as the most powerful calendar technology on the market. Campos stated, “Our team has always been our greatest strength. We have a fantastic and diverse group of professionals who have loved working together. Today, that team is becoming part of something even bigger – a company that is transforming the workplace: Slack”. Slack is acquiring Woven, having previously invested in it through its Slack Fund. However, the terms of the transactions are still unclear. (See Slack stock analysis on TipRanks). Credit Suisse analyst Bhavin Shah initiated coverage of Slack two months ago with a Hold rating. Shah has kept his recommendations consistent with Credit Suisse's prior coverage and has not made any changes to Slack's rating. Wall Street is cautious about Slack's long-term prospects based on two Hold recommendations. The average analyst price target of $45 implies 6.13% upside potential to current levels. Slack scores 1 out of 10 on the TipRanks’ Smart Score rating system, implying it is likely to underperform the broader market. Related News: Boeing 1Q Net Loss Narrows; 737 Max Deliveries Halted Apple Slapped With $12M Fine In Russia Over Anti-Competitive Practices - Report Baidu To Launch Autonomous Ride-Hailing Services In Beijing More recent articles from Smarter Analyst: XPeng’s April Vehicle Deliveries Jump 285% AstraZeneca’s Farxiga Gets FDA Approval For Chronic Kidney Disease Digital Turbine Closes AdColony Acquisition Skyworks Delivers Modest Earnings Beat In 2Q Read More... 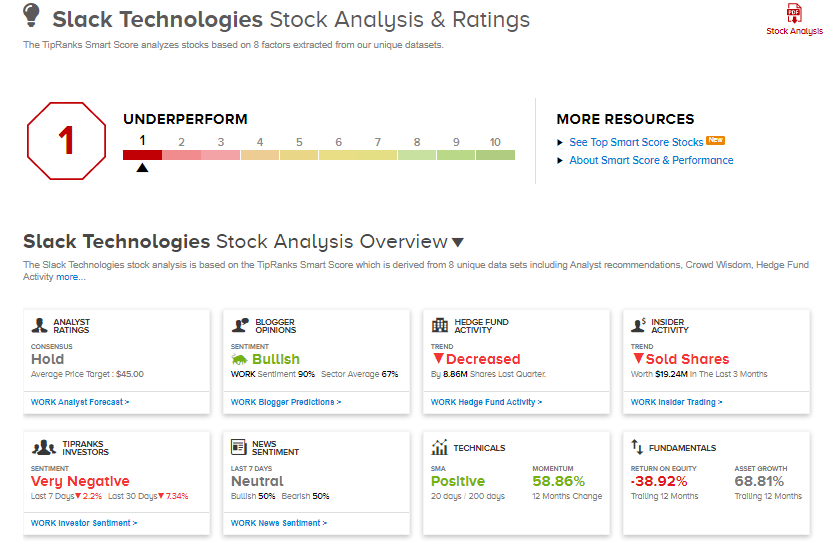 (Bloomberg) — The booming ETF industry may be set to lure even more cash in the coming years as rich Americans facing higher capital gains taxes look to limit what they owe Uncle Sam.President Joe Biden’s plan to double the rate those making more than $1 million a year pay on investment profits would accelerate a shift that’s already seen hundreds of billions of dollars migrate from mutual funds to exchange-traded funds, market watchers say. That’s because ETFs are generally more tax efficient, spinning off fewer capital-gain disbursements that for some could soon become a lot more costly.In fact, by one measure, the tax efficiency of ETFs has been the single most important driver behind the tectonic shift in asset allocations in recent years. While the administration’s plan remains in its infancy and is sure to face intense scrutiny from lawmakers in the months ahead, even an incremental hike in the capital-gains rate would likely spur further ETF usage, according to David Perlman, an ETF strategist at UBS Global Wealth Management.“If capital gains tax rates are going to be higher, if you have a choice of a structure that helps to defer capital gains and gives you more control over when to recognize those gains, you’d be more inclined to go in that direction,” Perlman said.When an investor exits a mutual fund, the fund’s manager must sell securities to raise cash for the redemption. The same investor leaving an ETF can sell their shares on to another investor, meaning neither the fund nor its manager has made a taxable transaction.Meanwhile, the “in-kind” process used to create and redeem shares in an ETF — whereby the ETF issuer exchanges the fund’s underlying securities with a market maker rather than transacting in cash — means the ETF rarely executes a taxable sale.A December study by researchers at Villanova and Lehigh universities found that over the past five years, ETFs have averaged a tax burden 0.92% lower than active mutual funds. Moreover, particularly for high net-worth investors, tax considerations have outweighed both performance and fees as the primary driver of flows out of active mutual funds and into ETFs, the findings showed.“There’s no question Biden’s plan to hike the capital gains tax could be a boon for ETFs,” Nate Geraci, president of the ETF Store, an advisory firm, said via email. “Despite significant market share gains by ETFs over the past decade, there are still trillions of dollars locked in less tax efficient mutual funds.”Last year alone, the ETF industry took in almost $500 billion, while mutual funds lost about $362 billion, according to data compiled by Bloomberg.ETF AdvantageMost ETFs hardly pass along any capital gains to shareholders nowadays. Only 3 of 585 in a CFRA analysis made disbursements in 2020, Todd Rosenbluth, head of ETF & mutual fund research at the firm, wrote in an April 26 report. Over the same span, 37 of 39 domestic equity mutual funds from T. Rowe Price Group Inc. incurred a capital gain, the analysis showed.“We expect more people that mix ETFs and mutual funds together will be more inclined to shift toward strategies to avoid paying higher capital gains taxes in the future,” Rosenbluth wrote.Even investors not affected by the higher rate could migrate toward ETFs, he added. Simply the discussion of capital gains reminds investors of the industry’s innate tax advantages over mutual funds.Others aren’t convinced a higher capital-gains rate will do much to boost inflows into ETFs. Wealthy investors would have to sell their mutual fund holdings to make the switch, triggering significant tax liabilities in the process, said Michael Zigmont, head of trading and research at Harvest Volatility Management.“I see this tax hike not being good or bad for ETFs,” he said.Meanwhile, ETFs don’t suit every investment need. The U.S. retirement system remains heavily geared toward mutual funds, for example.Nonetheless, Perlman agrees with Rosenbluth that the potential tax change could even have an impact on investors below the $1 million annual earnings threshold.Those expecting to soon find themselves in the upper tax bracket, or concerned the threshold could be lowered down the road, are also likely to shift their future allocations, he said.“The incentives apply more broadly than just to those impacted by the proposal,” Perlman said.For more articles like this, please visit us at bloomberg.comSubscribe now to stay ahead with the most trusted business news source.©2021 Bloomberg L.P.

: Nio deliveries more than double in April, but growth slows
Outside the Box: Biden may have to relent on the SALT cap to get his tax plan through Congress
Comment

The Moneyist: ‘I’m nobody’s ATM’: I’m 27, successful, and always pay for my friends. How do I stop without making them angry?

Traffic at Walmart, Costco and Target falls for the first time in weeks as coronavirus stockpiling behavior shifts

Biden Will Need to Get Creative to Save the Economy