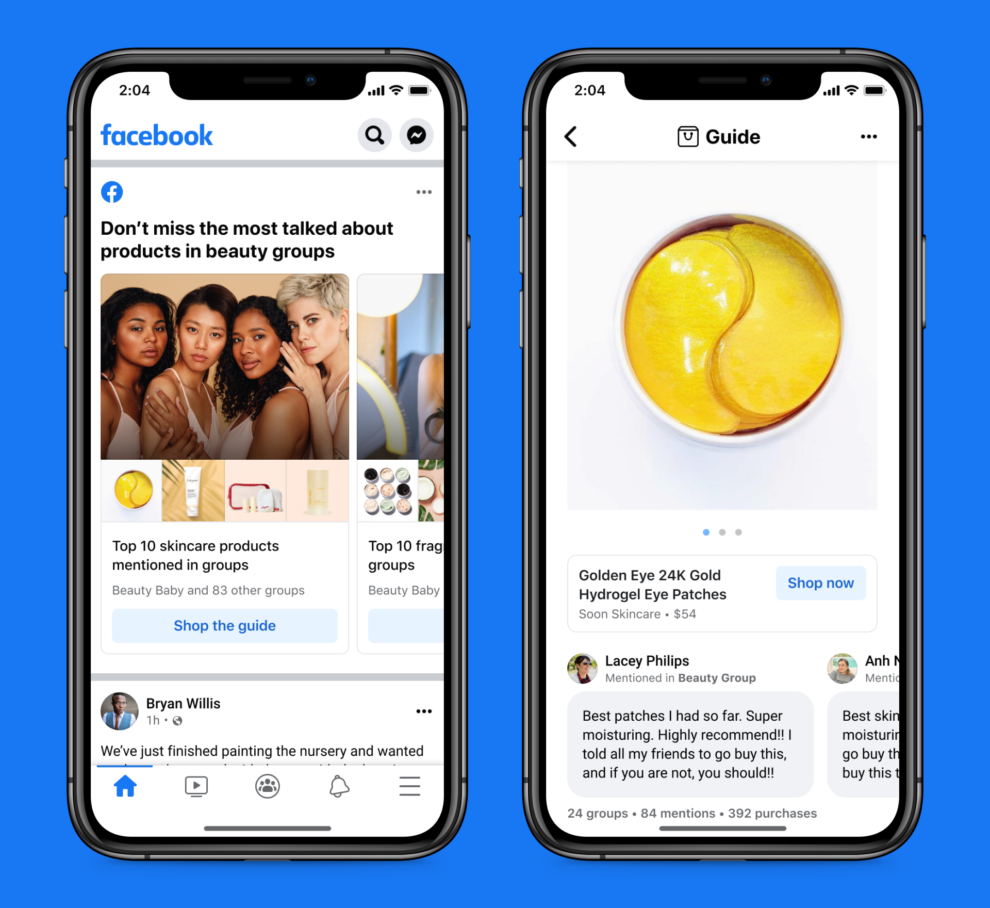 What shopping will look like in the metaverse remains an open question, though plenty of efforts are already underway to define it. Some of them come from Meta, which just introduced new features for its primary Facebook app that may shed light on the company’s pursuit of real commerce in the virtual world.

On Friday, Meta introduced new community-oriented e-commerce features that are, in the near term, designed to use people’s personal connections, hobbies and causes to sell product. But the moves may also be foundational to a future Meta metaverse, already in progress, which appears to depend on a heightened sense of community.

The primary update offers the ability for anyone to create a Facebook Shop within groups they belong to on the platform.

Dubbed Shops in Groups, the move ties shopping to personal connections, hobbies and causes, effectively turning a spigot on a new pipeline that, according to the company, more than 1.8 billion people use per month.

“I’m excited because this is a way for us to take Shops and bring it to additional types of organizations,” Yulie Kwon Kim, Meta’s vice president of product management, explained to WWD. “There are a lot of organizations that are built specifically around different communities that people care about.”

Superficially, the benefits are obvious. OctoNation, an octopus fan group that has been testing the feature, has been selling stickers, cups and apparel that feature its fandom of the water-loving arthropod. Schools, clubs and other organizations can follow suit and raise funds or generate revenue among group members who are inclined to support them.

Other changes follow the same theme: product recommendations in Groups conjures shopping links and imagery whenever someone recommends products to other members, and top product mentions in the news feed highlights the most recommended items inside a given user’s groups. These join other initiatives, like live shopping for creators, which the company is testing.

“The top theme is really community overall, where within our apps, people discover, they discuss, they trust recommendations because of the communities they have and a lot of these are within groups. But there is community, even more broadly around this,” said Kim. She pointed to live shopping as an example. Creators, by highlighting a live shopping stream from their personal pages, can draw their fan communities and brands around a cause they care about.

“These groups formed around very specific interests that people have. There might be a medical health support group or a ‘moms in tech’ group or auto enthusiast group — these are the people you turn to for advice and support,” she explained. “So, even as we look toward the metaverse, we think that these will be important parts of people’s experiences. And a lot of the shopping features that we’re building, enable people to do more within those contexts.”

Meta envisions a virtual environment that’s capable of offering a deeper sense of presence. If it succeeds, the experience can foster a sort of intimacy that transcends 2D social networks. The implications are broad, but from a business standpoint, that intimacy may be potentially more influential and powerful for things like commerce, recommendations and other behavior-shaping activities.

Consider fellow group members congregating in “Horizon Worlds” — a shared virtual space that Meta is already building — engaging in activities, hobbies or chats and asking for advice and suggesting products. In essence, it amounts to the virtual world’s version of word of mouth. Meta appears to be laying groundwork for that scenario, familiarizing users with the notion that direct shopping features will become a natural part of the conversation.

How precisely that will work — whether a pop-up e-commerce link appearing above a friend’s avatar, or the auto-generation of a one-click teleportation feature to visit a virtual store — remains to be seen. In fact, with much of the metaverse proposition still amorphous, perhaps it’s no surprise that the shopping prospect feels abstract as well. It will likely stay that way for quite some time. Even Andrew “Boz” Bosworth, longtime Facebook executive and Meta’s next chief technology officer, appears to be bracing for the unknown.

Revelations about comments he made in a March internal memo reportedly showed reservations about his company’s overarching mission. The sentiments, as obtained by The Financial Times, dealt with interactive virtual reality’s penchant for being a “toxic” place, as it can deepen bullying and other bad behaviors. Moderating behavior and speech in the metaverse “at any meaningful scale is practically impossible,” Boz reportedly wrote.

How that squares with Meta’s narrative about community, support and cause-based activities is…well, not at all. But it suggests that the company knows that its ambitions and the harsh realities of this looming virtual world could be heading for a clash.

Outside the Box: I inherited money. Should I invest it all at once? Or space it out?