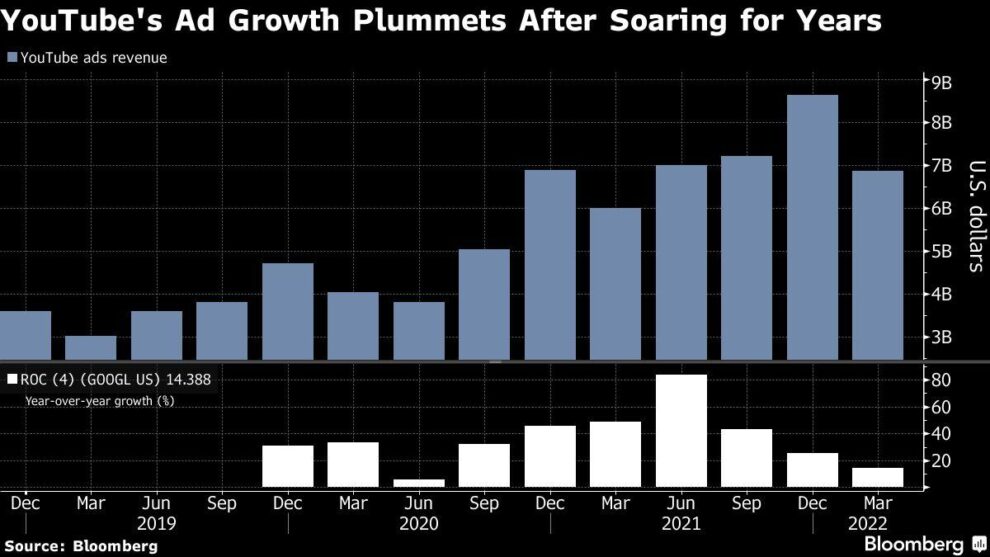 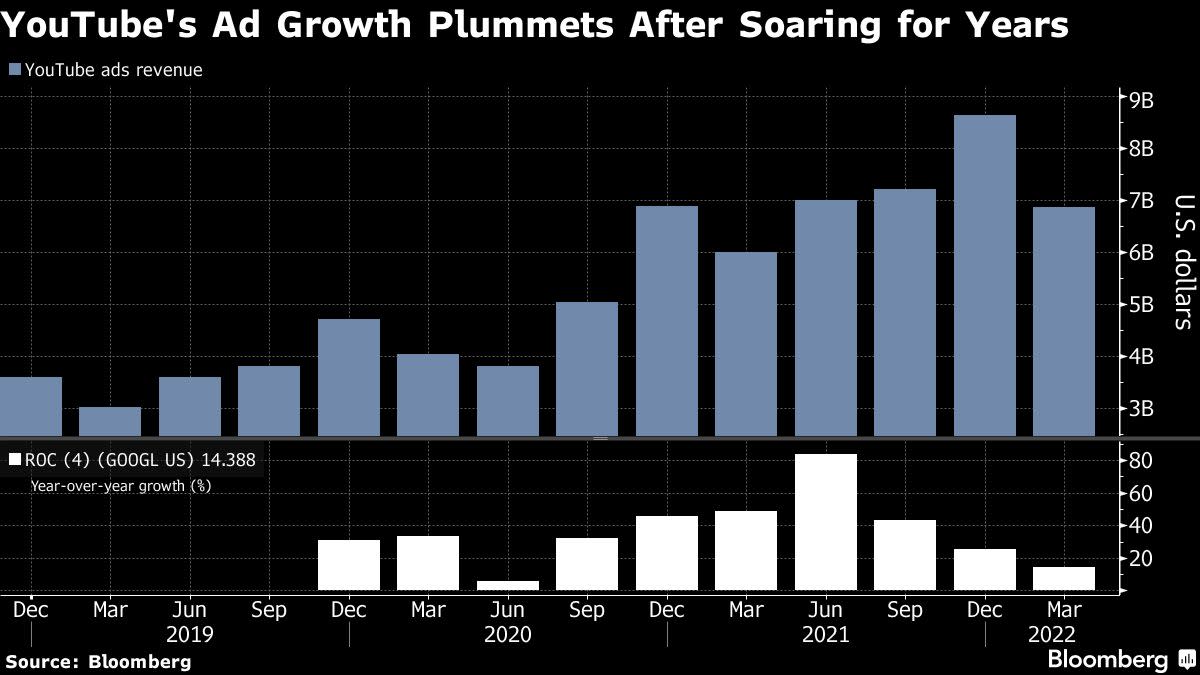 (Bloomberg) — For months, investors have worried about twin forces walloping Facebook’s business — the targeted advertising bans on iPhones and the rising popularity of TikTok.

The concerns should also have been directed at Google’s YouTube. Combined with economic upheaval from the war in Ukraine, those pressures contributed to an abrupt sales slowdown for the world’s largest video service and a rare earnings miss for Google’s parent company, Alphabet Inc.

The shares fell about 2.7% in pre-market trading Wednesday after the company reported first-quarter results.

Over the past year, Apple Inc. has upended social media companies by placing tight restrictions on third-party ads on iPhones. That hit Meta Platforms Inc., which operates Facebook and Instagram, and other mobile-centric social networks like Snap Inc., while leaving Google relatively insulated because it’s less reliant on that form of targeted ads.

But not YouTube. Previously, Google said Apple’s privacy changes had a small impact on its video site, but Tuesday its executives said YouTube saw a slowdown in growth of direct-response ads, the marketing formats that use targeting to reach consumers. YouTube advertising was the weakest link in Alphabet’s first-quarter results, posting just a 14% increase to $6.87 billion, more than $500 million shy of analysts’ estimates. A year earlier, the video unit reported a 48% jump in the same quarter.

“YouTube [is] now feeling the sting,” said Dan Morgan, a senior portfolio manager at Synovus Financial Management. That’s particularly worrisome for the stock since YouTube, along with Google’s cloud division, “was expected to be the next leg of growth,” he added.

Google executives attributed some of YouTube’s troubles to Russia’s invasion of Ukraine. The political unrest led to a “pullback” in spending across Europe, Chief Financial Officer Ruth Porat said. During the quarter, the company’s overall sales in Europe and the Middle East grew 19% compared with 33% the prior year.

In February, Google suspended its sales operations in Russia, citing the war. The company kept its search service and YouTube in the country, but the freeze had an “outsized” impact on YouTube’s business, Porat said on a conference call after the results were released. She shared that Russia accounted for about 1% of Google’s overall sales, and declined to offer any predictions on the length of the impact. “I think it’s too early to comment,” she said. “Tragically, it is still ongoing.”

While Google executives discussed the war and Apple’s restrictions, they left unsaid another threat to YouTube: TikTok, the popular video app from China-based ByteDance Ltd. that has forced Meta to pour resources into Facebook and Instagram, and challenged YouTube’s supremacy in the online creator industry.

On Tuesday, Google’s leaders were happy to discuss YouTube’s answer to TikTok — Shorts. YouTube launched the feature in 2020 as a space for short-form videos on its app and website. The company kept Shorts free of commercials, paying creators from a fund based on their performance metrics.

That ad-free experiment is ending. Now YouTube is starting to test ads inside Shorts, Google sales chief Philipp Schindler told investors. He said the company was “encouraged by initial advertiser feedback and results.”

Executives also touted YouTube’s growth potential in online shopping and on TV screens, major areas of investment. But much of the focus — and questions from analysts — was pinned on the rivalry with TikTok.

“There was also a lot of enthusiasm about Shorts in the era of TikTok, but clearly it’s very early days for them,” said Joanna O’Connell, an advertising analyst with Forrester.

Google said that Shorts gets 30 billion daily views, a fourfold increase from a year before. But that increased viewership has taken away some of the traffic from YouTube’s primary longer videos, where it makes all of its money, Porat said.

Porat said the business teams at YouTube were working on “closing the gap” between its primary commercial service and its experimental one that resembles TikTok. “So we’re excited about the new opportunities with Shorts,” she concluded.