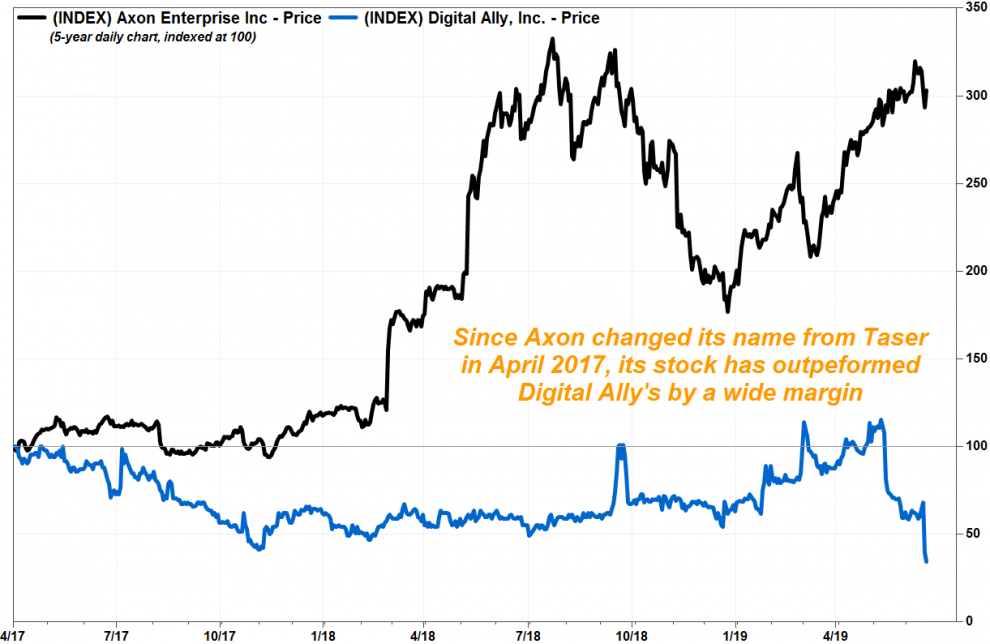 Investors who own Axon Enterprise Inc. should brace for the stock to lose half its value, according to well-known short seller Spruce Point Capital Management, which issued a “strong sell” opinion on the law enforcement technology company, that was formerly known as Taser International. Read More...

Investors who own Axon Enterprise Inc. should brace for the stock to lose half its value, according to well-known short seller Spruce Point Capital Management, which issued a “strong sell” opinion on the law-enforcement technology company, that was formerly known as Taser International.

In a research report released publicly on Wednesday, Spruce Point said it believes Axon will “shock” investors with “significant earnings disappointment” and increasing cash burn, as the maker of Taser stun guns and body cameras fails to scale beyond its niche businesses. In addition, Spruce believes investors “misunderstand” how tariffs on imports on China will weigh on margin growth.

As a result, Spruce Point said the risk-versus-reward profile for investors who own the stock at current levels is “terrible.” With the stock’s valuation near all-time highs, and with Wall Street sentiment on the bullish side, the short-focused investment manager warned investors to “brace for 40%-60% downside risk” for the stock, to $27.50 to $40.00.

The average rating of the 13 analysts surveyed by FactSet is overweight, or the equivalent of buy, and the average stock price target of $72.30 is 3.4% above current levels.

Wall Street’s bullishness comes despite the company disappointing investors with its past four earnings reports. The stock has fallen on the day after the last four reports were released, by an average of 9.9%, even though Axon beat earnings expectations in three of the past four quarters and beat sales expectations each quarter.

The company’s next quarterly report is scheduled for Aug. 2, according to FactSet. The FactSet consensus for earnings per share is currently 16 cents, down from 18 cents a year ago, while the consensus for revenue of $115.5 million is up 16% from $99.2 million the year before.

One of Spruce Point’s specific concerns is that it believes investors “misunderstand” Axon’s exposure to China tariffs.

In the 2017 10-K annual report filing with the Securities and Exchange Commission, Axon said it “primarily” buys “custom components, including finished circuit boards assemblies and injection-molded plastic components” from suppliers in the U.S., Mexico, China and Taiwan.

In the 2018 10-K, the company disclosed that it buys “finished circuit boards and injection-molded components from suppliers” located in the U.S., Mexico and Taiwan.

In the company’s latest 10-Q filing following first-quarter results, Axon said factors that “compressed” margins for the period included tariff and customs expenses, although the company did not clarify what the tariffs expenses were for.

“We believe Axon has concealed its dependence on Chinese imports,” Spruce Point said in its report. “Based on import records, we believe Axon has become increasingly dependent on China imports tied to the body cam business in the past few years, and given ongoing tariffs, we believe these costs will weigh on margins,” and could easily cause the company to miss 2019 expectations for earnings before interest, taxes, depreciation and amortization (EBITDA) by 10%.

In the company’s Conflict Minerals Report for 2018, in which it disclosed the countries where suppliers sourced conflict minerals to make products for Axon, China was listed multiple times for gold, tantalum, tin and tungsten.

Meanwhile, based on field research, Spruce Point said it believes Axon implemented, without disclosing, price increases of about 5% in the first quarter, but still missed gross margin expectations.

Outside the Box: Why the smartest stock investors are passing on most SPAC IPOs

The best paid and free VPNs for iPhones, Android, laptops, and streaming