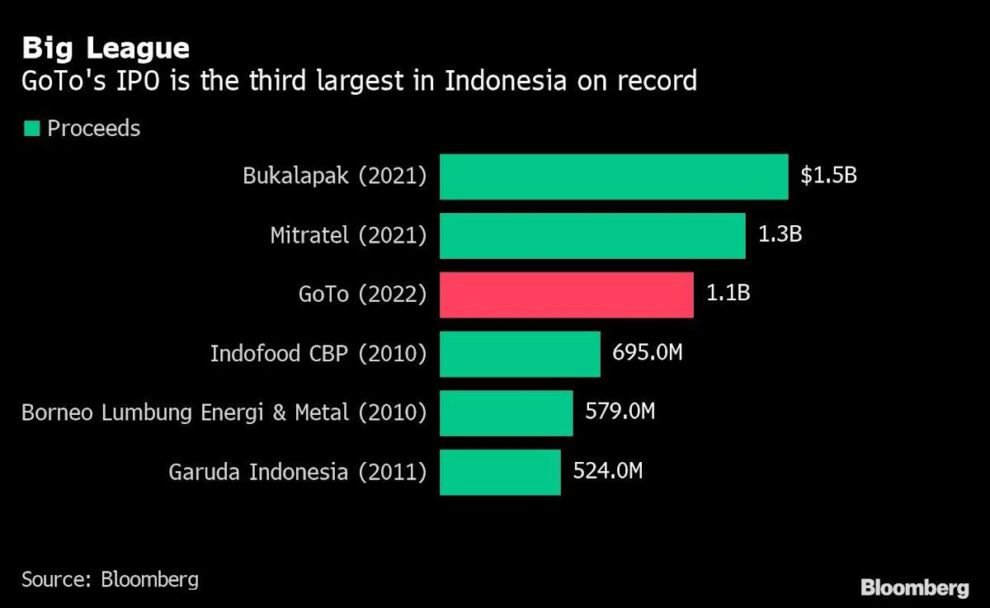 (Bloomberg) -- GoTo Group shares declined after its quarterly losses widened, underscoring investor skepticism about the earnings potential of the Indonesian tech company that had its trading debut last month.Most Read from BloombergStocks Trim Gains as Inflation Concerns Increase: Markets WrapNATO Should Think Twice Before Accepting Finland and SwedenBiden to Meet Powell to Discuss Economy as Inflation BitesWorld’s Riskiest Place for Flying Averages One Disaster a YearBitcoin Rallies Above $30, Read More... 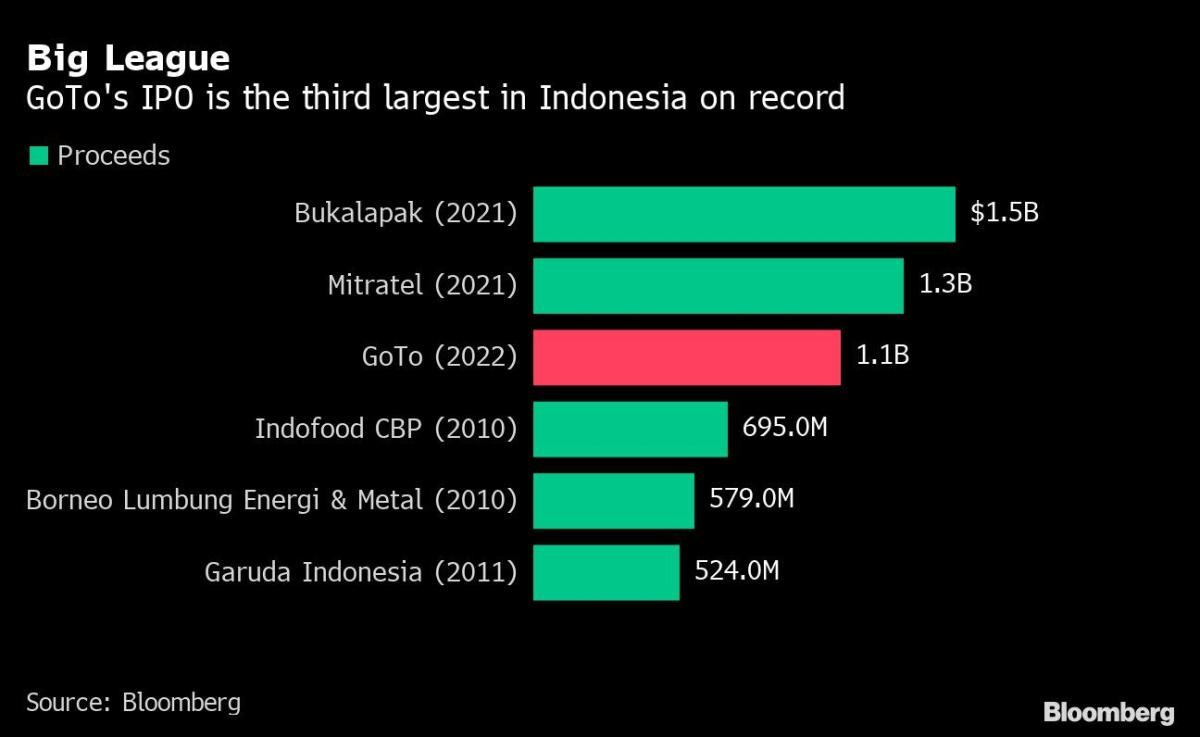 (Bloomberg) — GoTo Group shares declined after its quarterly losses widened, underscoring investor skepticism about the earnings potential of the Indonesian tech company that had its trading debut last month.

The stock fell as much as 3.8% to 302 rupiah in Jakarta after the ride-hailing and e-commerce operator reported a net loss of 6.47 trillion rupiah ($444 million) for the quarter though March, triple that a year earlier. Bernstein started coverage of the stock with an underperform rating and price target of 224.16 rupiah, implying room to fall 29%.

GoTo is trying to convince investors of its profitability prospects even as Russia’s invasion of Ukraine, soaring inflation and rising interest rates weigh on the technology industry globally. The company raised $1.1 billion in one of the world’s largest initial public offerings for 2022, gaining funds to compete against rivals such as Grab Holdings Ltd. as online services gain steam in Southeast Asia.

GoTo is the largest of a crop of companies seeking to ride the rapid pace of mobile penetration and internet use in Southeast Asia, a region of more than 650 million people. Yet Chief Executive Officer Andre Soelistyo still needs to reassure investors of the company’s earnings potential amid heavy spending to fend off competition and lure more users.

“Local knowledge and cross-selling between Gojek and Tokopedia give GoTo an upper hand in the country, but rivals such as Grab and Sea may take a bigger share of the region’s broader internet economy as they expand in other countries while GoTo stays focused on Indonesia. Its roughly 10x forward multiple, based on our sales scenario, is rich vs. the duo and may be unsustainable.”

Gross revenue advanced 53% to 5.2 trillion rupiah in the quarter. For the calendar year 2021, the metric rose at about a 44% clip on a pro-forma basis. GoTo’s quarterly adjusted loss before interest, taxes, depreciation and amortization widened to 5.4 trillion rupiah.

The company is the result of last year’s merger between Indonesia’s two most valuable internet startups — ride-hailing provider Gojek and e-commerce firm Tokopedia — to get more firepower against rivals in an increasingly cutthroat market. Over the years, the two amassed a long list of investors, including Google, Tencent Holdings Ltd. and Sequoia Capital India.

GoTo is among Southeast Asian consumer-internet companies that are adding users at a rapid clip but have yet to generate sustainable profit. The company is enjoying a leadership position in Indonesia, a country of more than 270 million people whose mobile-savvy consumers are shopping on Tokopedia’s platform and ordering rides and food via Gojek’s app.

That has helped its shares outperform those of Grab, which became a publicly traded company through a merger with a U.S. special purpose acquisition vehicle late last year. GoTo shares have now lost about 10% since its IPO, valuing the company at about $24.7 billion. Grab, down about 70% since its SPAC merger, has a market capitalization of less than $10 billion.