Snap Inc.’s shares were up 5% in extended-hours trading on Thursday after the social media company reported a break-even quarter on a non-GAAP adjusted basis in 1Q versus a non-GAAP diluted loss per share of $0.08 in the same quarter last year. Analysts were expecting an adjusted loss of $0.05 per share in 1Q. Snap (SNAP) posted revenues of $770 million in the first quarter, rising 66% year-on-year and topping consensus estimates of $744 million. Snap’s CEO Evan Spiegel said, “We began 2021 by achieving our highest year-over-year revenue and daily active user growth rates in over three years during the quarter and delivering positive Free Cash Flow for the first time in Snap’s history as a public company. The strength of our business underscores our relentless focus on product innovation and is a testament to our team’s ability to execute well together over the long term.” The company had daily active users (DAU) of 280 million in 1Q, up by 22% year-on-year. A majority of DAUs in the first quarter were on SNAP’s Android version. The company also launched Spotlight, a platform that showcases entertaining videos, in countries like India, Brazil and Mexico. In the second quarter, SNAP expects revenues to range from $820 million to $840 million versus $454 million in 2Q FY20. The company expects to either incur an adjusted loss before interest, taxes, depreciation and amortization of $20 million or breakeven versus an adjusted loss before interest, taxes, depreciation and amortization of $96 million in 2Q of last year. (See Snap stock analysis on TipRanks) Following the earnings, Oppenheimer analyst Jason Helfstein reiterated a Buy and a price target of $82 on the stock. Helfstein said in a research note to investors, “SNAP is showing strong improvements in monetization as a result of its leading ad platform and continued strong DAU growth. Moreover, SNAP appears to have the pole position in AR [augmented reality] advertising and is now looking at extending its software to 3P hardware.” “We see SNAP as a strong AR partner to AAPL/GOOG hardware competitors. And we now see reduced risks from AAPL’s removal of IDFA [Identifier for Advertisers], as the delayed rollout allowed more time to work with advertisers to adopt AAPL’s SDK [software development kit],” Helfstein added. Overall, consensus among Wall Street analysts is a Strong Buy based on 28 Buys, 6 Holds, and 1 Sell. The average analyst price target of $78.34 implies upside potential of about 37.3% to current levels. Related News: Chipotle Mexican Grill Delivers Mixed Results In 1Q Intuitive Surgical Posts Strong 1Q Results, Beats Street Estimates Roku Rebrands Content From Quibi Acquisition – Roku Originals More recent articles from Smarter Analyst: SNC-Lavalin Wins $15M Contract In California National Bank Of Canada Publishes Its 2020 ESG Report Precision Drilling Revenue Drops 38% In 1Q; Shares Plunge 6% Mullen Group EPS Beats Consensus In 1Q Read More... 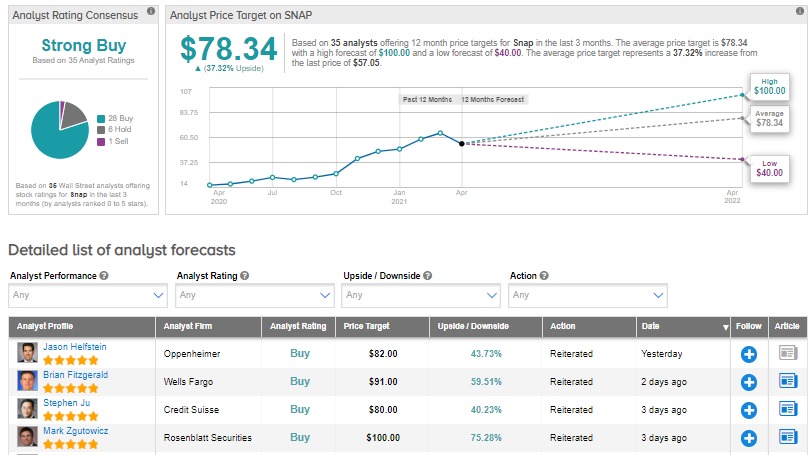 (Bloomberg) — One of Turkey’s largest cryptocurrency exchanges said it lacked the financial strength to continue operations, leaving hundreds of thousands of investors fearing their savings have evaporated as authorities sought to locate the company’s 27-year-old founder, who fled the country.Confusion reigned about how many users of the Thodex exchange were affected and how much money was at stake. In a statement from an unknown location, Thodex Chief Executive Officer Faruk Fatih Ozer promised to repay investors and to return to Turkey to face justice after he did. The government moved to block the company’s accounts and police raided its head office in Istanbul.Losses could be as high as $2 billion, according to Haberturk newspaper, and a lawyer for the victims said the money invested by about 390,000 active users had become “irretrievable.” Both figures have been disputed by Ozer. About 30,000 users have been impacted, he said in a statement on the company’s website on Thursday.While authorities and customers tried to work out the details of what happened, a senior official in President Recep Tayyip Erdogan’s office called for rapid regulation of the crypto market. Globally, the surge in the prices of digital tokens has been accompanied by convictions and regulatory measures after various scams tied to trading platforms.The Turkish government should take action “as soon as possible,” Cemil Ertem, a senior economic adviser to Erdogan, told Bloomberg. “Pyramid schemes are being established. Turkey will undoubtedly carry out a regulation that’s in line with its economy but also by following global developments.”Alternative InvestmentsThodex was part of the cryptocurrency boom that has drawn in legions of Turks seeking to protect their savings from rampant inflation and an unstable currency. Inflation hit 16.2% in March, more than three times the central bank’s target of 5%. The Turkish lira has weakened 10% against the dollar this year, its ninth consecutive year of losses.The government spent a massive $165 billion in foreign-exchange reserves over the past two years, Erdogan revealed on Wednesday, part of a futile effort to prop up the national currency. Concern about the country’s dwindling foreign-exchange reserves, which are negative when money borrowed by the government from private banks via swap agreements are factored in, has fueled concern about both lira and dollar deposits — and pushed savers into alternative investment vehicles.Last Friday, the volume of trade in Turkish crypto markets tripled to over $1.2 billion from a week earlier, according to data published by coingecko.com, which tracks data on price, volume and market value on crypto markets. That compares with an average daily trading volume in the Turkish stock market’s benchmark index of about $3.1 billion.“One can establish a crypto exchange with just 50,000 liras (about $6,000) in capital,” Oguz Evren Kilic, a lawyer representing Thodex users, said by phone. “There’s a huge regulatory gap in this field.”Ozer didn’t respond to multiple calls to his mobile phone. The company’s call center also didn’t pick up calls. Bedirhan Oguz Basibuyuk, Thodex’s lawyer, told Bloomberg he doesn’t know where Ozer is but that he’s not in Turkey. Demiroren News Agency reported that he fled to Albania on Tuesday, publishing what it said was a photo of him at Istanbul’s airport.Dogecoin CampaignLast month, Thodex initiated a campaign to boost membership by offering millions of free Dogecoins to new registrants. Its website says 4 million of the coins were distributed, though many people have taken to social media to complain they never received them.“I was born as one of the three siblings of a civil servant,” Ozer said in his statement, adding that he’s a high-school dropout. As the company ran into financial trouble, he said he thought about either committing suicide or giving himself up to authorities, but both of those options meant clients’ assets would never be retrieved.“So I decided to stay alive and fight, work and repay my debts to you,” he said. “The day I repay all my debt, I will return to my country and give myself in to justice.”(Updates with new lede, government agency action, details throughout.)For more articles like this, please visit us at bloomberg.comSubscribe now to stay ahead with the most trusted business news source.©2021 Bloomberg L.P.

The Tell: Here’s why ‘believers in a blue wave’ should dive into junk bonds, says JP Morgan

Coronavirus update: U.S. case tally climbs above 6 million and FDA head says he won’t be pressured to rush out a vaccine