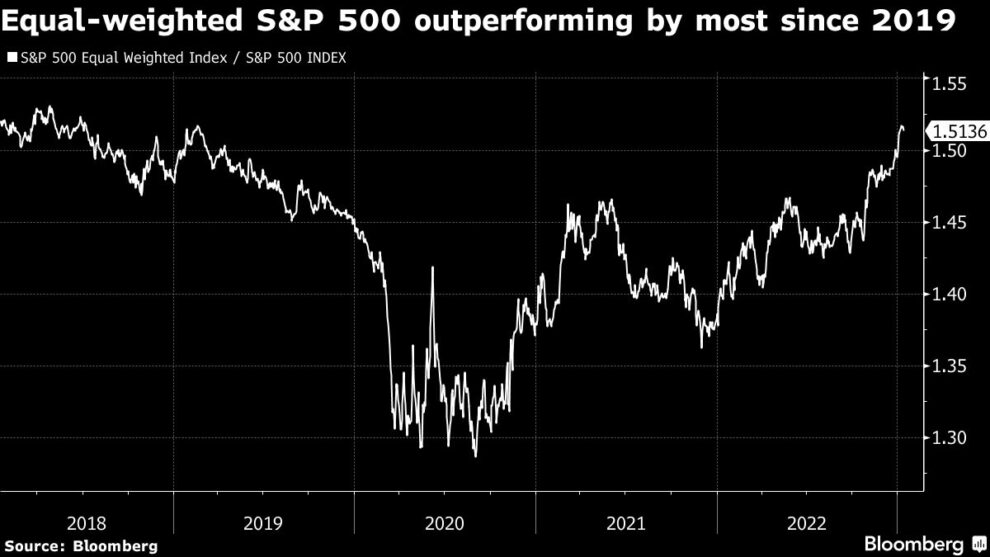 (Bloomberg) -- The S&P 500 is technically still mired in a bear market, but a closer look below the surface shows that most of its stocks are in the midst of a big rally.Most Read from BloombergPfizer Bivalent Vaccine Linked to Strokes in Preliminary Data‘I Feel Like I Got Duped’: Tesla Price Drop Angers Current OwnersTrump’s Attack on NY Sexual Assault Law Called ‘Absurd’ By JudgeThe Document That Separates Biden and TrumpYellen Says US to Take Extraordinary Steps to Avert a DefaultWhile the be Read More... 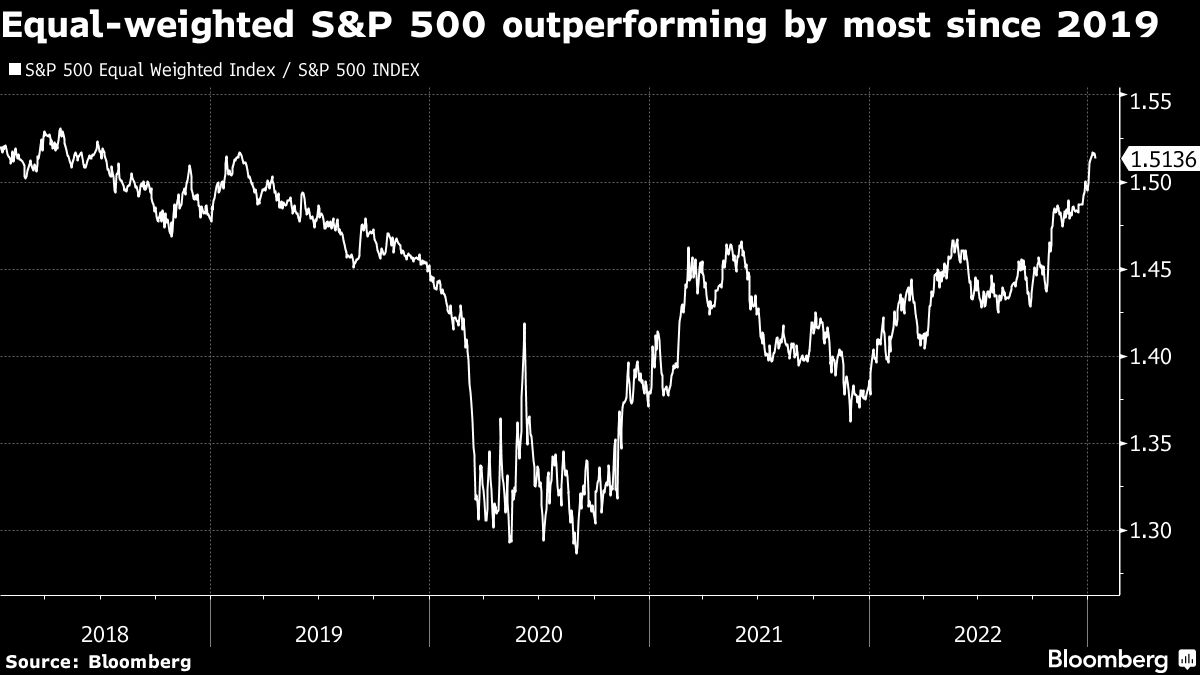 (Bloomberg) — The S&P 500 is technically still mired in a bear market, but a closer look below the surface shows that most of its stocks are in the midst of a big rally.

While the benchmark is down 17% from its record high set on Jan. 3, 2022, about three-quarters of the stocks in the index are up 20% or more from their 52-week lows, according to data compiled by Bloomberg. Among the standouts are Wynn Resorts and Boeing Co., which have both surged more than 60% in the past three months alone.

So why isn’t the S&P 500 ripping higher? Blame it on the ugly performance of a handful of technology-related stocks whose massive market values give them greater influence over the index that is weighted by market capitalization. Just five stocks — Apple Inc., Amazon.com Inc., Tesla Inc., Microsoft Corp. and Meta Platforms Inc. — are responsible for nearly half of the S&P 500’s losses over the past 12 months.

Apple and Microsoft, for example, each with market values of roughly $2 trillion, have a combined weighting of more than 11% in the S&P 500. That gives them more sway over the index’s performance than all of the energy, materials and utilities companies in the benchmark. So even though American Airlines Group Inc. is up 34% this year, its 0.03% weighting does little to push the index higher.

To get a broader view on what’s happening with equities, some market professionals are watching a version of the S&P 500 that puts all of the stocks at an equal weighting. That index is beating the S&P 500 by the widest margin since 2019 and is up 17% since hitting a low on Sept. 30.

The equal-weighted index is important to follow because it offers a “deeper view” into the overall recovery, according to Dan Wantrobski, director of research at Janney Montgomery Scott. “This gives us more confidence that stocks should continue to base/bottom this year,” he said.

Stocks have rallied in the first two weeks of the year amid optimism that cooling inflation will prompt the Federal Reserve to ease up on its most aggressive interest-rate hiking campaign in decades. The S&P 500 advanced 2.7% this week after government data showed consumer prices rose in December at the slowest pace in more than a year.

Communication services and consumer discretionary stocks have been among the best performers in the S&P 500, with companies like Warner Bros Discovery Inc., United Airlines Holdings Inc. and Carnival Corp. rallying more than 20%.

Strength outside of the tech sector is a positive development for the average investor, according to Phil Blancato, chief executive officer at Ladenburg Thalmann Asset Management.

“A diversified portfolio lowers risk and gives you an opportunity to outperform,” he said in an interview. “Diversification is beating concentration.”

At the same time, investors’ growing appetite for risk amid hopes of a less aggressive Fed has also lifted some of 2022’s worst performers, like Amazon, which is up 17% in the first nine trading days of the year. Not all tech stocks have joined in, however. Apple and Microsoft are still lagging the S&P 500.

After this week’s inflation data, investors are turning attention to earnings season, which kicked off on Friday with results from JPMorgan Chase & Co. and Wells Fargo. Results from the biggest US banks were met with a less-than-enthusiastic response from Wall Street. The next Fed interest rate decision is due on Feb. 1 and the market is anticipating a 25 basis-point rate increase, down from the 50-basis point hike in December.

–With assistance from Matt Turner and Jessica Menton.