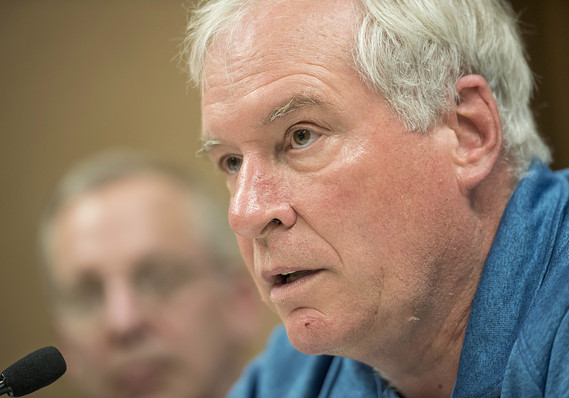 Rosengren, one of two Fed officials who voted against the Fed’s July interest-rate cut, indicated he wasn’t too concerned about the one-day 800-point drop in the Dow Jones Industrial Average DJIA, -1.08%   in mid-August or the “inverted yield curve” in the bond market.

When yields on the 10-year Treasury note are lower than rates on shorter-term securities, this is called an “inverted” yield curve. In the past, it has been a reliable indicator of depressed economic conditions. Many Fed officials think it remains a good signal.

In a speech at The Leo J. Meehan School of Business at Stonehill College, Rosengren said he was giving less credence to the inverted yield curve this year because it was the long end of the curve that was moving lower. Long-term rates are controlled by the market, he said.

In years past, it has been short-term end of the curve, where rates are controlled by the Fed, that has inverted, as rates get pushed higher by the central bank worried about inflation in a strong economy.

The Boston Fed president said he thought it was “plausible” that the depressed 10-year Treasury rate this year is due more to weakness among U.S. trading partners than fears about the domestic U.S. economy.

He also noted that stocks remain robust despite the rocky summer.

“Recession concerns do not seem to be reflected in the current pricing of stocks,” he said.

Markets were also reacting to significant risks from trade tensions, he said.

Rosengren didn’t address the ISM August manufacturing survey, which showed a contraction in activity for the first time in three years.

The Boston Fed president said he still expected 2% growth over the rest of the year, but was watching things closely.

“In my view, one should not be overconfidence that the economy will be just fine or that an economic downturn is inevitable,” Rosengren said.

The Boston Fed president suggested he would not support another rate cut in September unless it was clear the economy was softening.

“If the data continue to indicate a U.S. economy growing slightly above the level considered to be the potential growth rate with continued gradual increases in wages and prices, then in my view, no immediate policy action would be required,” he said.

The Fed is split into two camps on interest-rate policy. Many want to see more easing.

The Moneyist: My second wife wants me to put her name on my home — and refinance so we can buy another house together