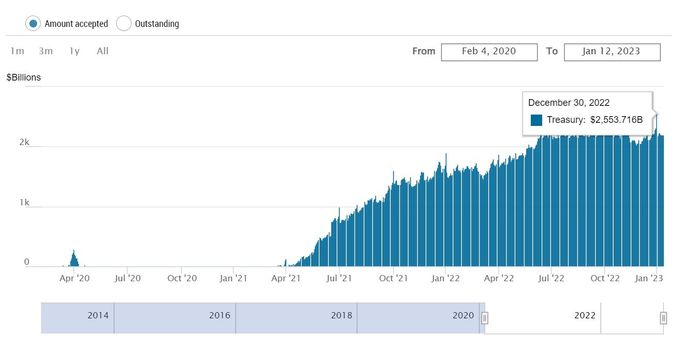 The U.S. government needs to strike a debt-limit deal before surging demand for the Federal Reserve's overnight reverse repo facility will ease, according to BofA Global's Mark Cabana. Read More...

While the Fed already cut its balance sheet to about $8.5 trillion from a near $9 trillion peak to battle high inflation, its popular overnight reverse repo facility has continued to see over $2 trillion in daily demand as investors keep cash tucked away at banks in the wake of last year’s bear market in stocks and bonds.

The Fed’s repo program lets eligible firms, like banks and money-market mutual-funds, park large amounts of cash overnight, while lately earning 4.3%, up from 0.5% in March.

Use of the Fed’s facility hit a record of about $2.5 trillion in late December (see chart), a time of year when liquidity in financial markets has been prone to run thin.

Now, the expectation is that it will take a breakthrough in Washington on government debt before the Treasury can resume selling Treasury bills to soak up demand from investors, and allow demand for the central bank’s overnight reverse repo facility to decline.

Treasury Secretary Janet Yellen warned top U.S. lawmakers on Friday that the government is expected to hit its debt limit next week. The Treasury will need to start taking “extraordinary measures to prevent the United States from defaulting on its obligations,” she wrote in a letter.

BofA Global’s Mark Cabana said in a Friday note that a common question his rates strategy team has been getting in 2023 has been how to make sense of the debt-limit fight as the Fed drains liquidity from the banking system as its balance sheet shrinks.

His team’s “short answer” is that the Fed’s shift to a smaller balance sheet since May has been mostly reflected in a lower Treasury cash balance at the Fed. But his team also thinks reliance on the reverse repo facility “should drop sharply,” once the government agrees to a new borrowing limit, and a “wave” of Treasury bill supply follows. It currently has a $31.4 trillion borrowing limit.

The Fed’s repo facility had nearly no customers for years until the pandemic hit. Demand began to pick up in April 2021, when short-term funding rates were next to nothing. Use has continued to rise even after the Fed in March began to dramatically raise rates and as assets roll off its balance sheet.

Higher Treasury yields have been a result of the Fed raising its policy interest rate sharply since last year to combat inflation. The 2-year Treasury rate BX:TMUBMUSD02Y was at 4.19% on Friday, according to FactSet. The 10-year Treasury yield BX:TMUBMUSD10Y was at 3.49%, after falling as low as 0.54% in 2020.