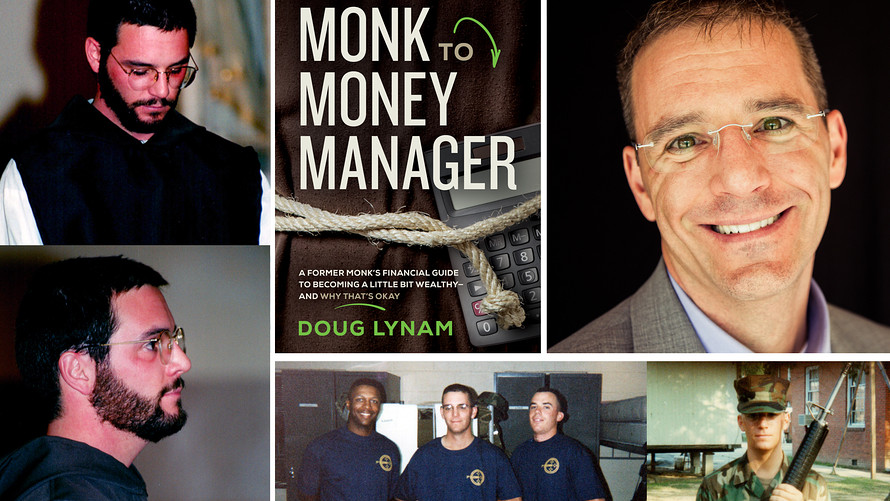 And how he reconciles that with Bible quotes like: “‘Blessed are you who are poor, for yours is the kingdom of God.” Read More...

Doug Lynam has been rich and poor; an atheist and a monk; a hippie and a Marine.

But perhaps his most surprising transformation is his latest one: that of investment advisor. That’s because for many years, the 46-year-old Santa Fe resident and former monk thought money was “the root of all evil … a tool used to manipulate,” he tells MarketWatch.

Indeed, he’d grown up wealthy and amid his parents’ divorce says he saw firsthand how money “could be used to control and hurt people.” In his teens, he rejected that by becoming a hippie, but soon found that “most hippies weren’t any less selfish than my parents, they just wanted different stuff,” he says. Next stop: college and then the Marines, which also didn’t quiet his soul searching. “I was looking for meaning, purpose and direction, and I wanted a real challenge.” That too didn’t pan out because “I didn’t want to kill people for a living.”

What did stick: being a monk. Lynam entered a monastery in New Mexico at age 22, where he stayed for roughly 20 years. It was there that he quickly learned just how much money and spirituality intertwine, as guests to the monastery told him their troubles. Indeed, as he writes in his new book “From Monk to Money Manager” that “almost every visitor who came with a spiritual problem also had a financial problem lurking in the background.”

“The financial problem is sometimes a root cause and sometimes a by-product—and sometimes they’re so tangled together it’s hard to know where one ends and the other begins. For example, when one client was dealing with the death of a loved one, their grief and loss were the primary concern. But there was also an estate to probate and no one to help,” he writes in the book. (He left the monastery when he found a new calling, as he puts it: to bring the highest ethical values and the best money management practices together.” He adds: “It’s going to take a lot of money to solve our most pressing global challenges, so we can’t demonize money on the false presumption that it is evil.”)

Also see: Why the best person to turn to for money advice may be a psychotherapist

Dealing with these financial-and-spiritual issues has led Lynam — now a partner at LongView Asset Management in Santa Fe — to believe that “God wants you to be a little wealthy,” he tells MarketWatch.

The reason: “You can’t live in a capitalist society without money. Money is the power that allows us to have impact in the world. Without it, you face a lifetime of great pain,” he says. One example he uses: Though the monks he lived with had “a great deal of love and compassion, they had no financial savvy and so they didn’t have the impact on the world they deserved to have. Not having much money left them feeble.” (When I ask him about Mother Theresa, he responded with this: Even Mother Theresa raised hundreds of millions of dollars to fund her charitable efforts – that’s financial savvy used for a good cause.)

Lynam knows that his views may seem controversial to some. When I asked him how he reconciled his beliefs about how money and spirituality intertwine, with Bible verses like “Blessed are you who are poor, for yours is the kingdom of God,” he said this: “When we say ‘blessed are the poor,’ we bless them because of the suffering they will face. Money isn’t the problem, poverty is,” adding that the Bible was written long before modern economics was invented. “People who think money and religion are antithetical, I would argue — where is God not?,” he says. “How could God not be in money? God is in all of us and all around us but somehow we want to exclude God from money?”

Instead, he says, it’s all about how we earn and use our money that matters — and doing this well can give money a higher purpose. “Some think that my wealth comes at the expense of someone else and that’s what makes it dirty, but that’s not [necessarily] the case. No one is in worse shape simply because I earn, save and ethically invest my money.”

His advice, then, to all of us is to think about how we earn and use our money. Invest so that you protect the future, Lynam advises. And take care of both yourself and others: “You have to take care of yourself first [financially and spiritually] before you take care of others,” he says, adding that’s because not doing that means you won’t be as much help to others. “Take care of your immediate needs for you and your family and then work out in concentric circles to help the world.”

Walmart Proves It Can Compete on Amazon's Turf